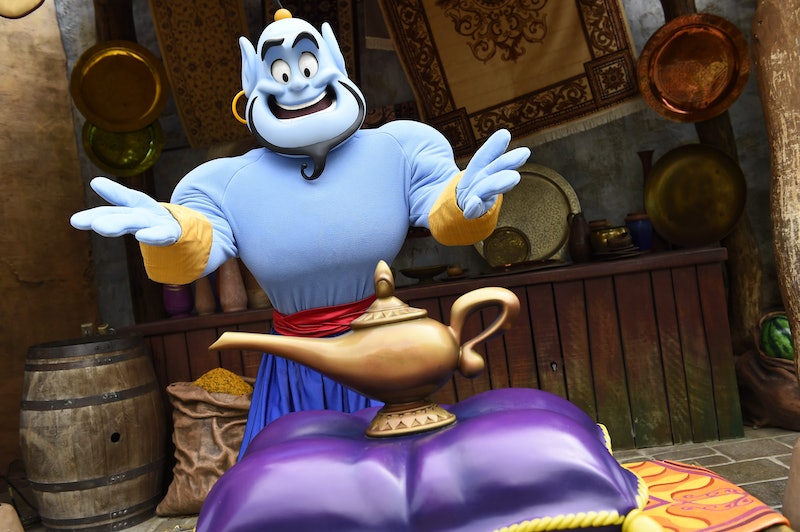 Come summer 2016, it'll be a whole new world over at Disney California Adventure Park's Hyperion Theater. According to the Disney Parks Blog, Disney’s Aladdin: A Musical Spectacular, which has been a California Adventure fixture since 2003, will be replaced by a stage adaptation of Frozen. (Maybe you've heard of it? It came out in 2013, there was a song about the importance of letting go, it won some awards, et cetera. It was kind of a "thing.")

Upon reading this news, I reached out to one of my favorite Aladdin characters: Abu, the titular character's monkey sidekick. I mean, why not? He always struck me as a fun, candid guy, and I was certain he'd have some fun, candid comments up his sleeve. I was stoked when he agreed to an interview.

Via email, Abu told me he wasn't much of a phone talker, so we set up a face-to-face meeting. He agreed to chat with me at a coffee shop in Santa Monica. When he entered the cafe, every patron instinctively reached for their cell phone. Abu noticed this and promptly struck pose after pose after pose. As he made his way to the table where I’d set up shop, he cackled. I noticed he was carrying something: a loaf of French bread twice his size. He sat across from me, held up his index finger, and then wolfed down the entire bread loaf in two minutes flat.

The dude sure knows how to make an entrance, I thought. After he was through with decimating the bread, our conversation began.

Kristie: So Abu, how do you feel about Disney’s Aladdin: A Musical Spectacular ending?

K: You realize I didn’t have anything to do with this, right?

A: [Grabs two sugar packets and throws them in the air]

K: I’m not exactly sure what you mean by that.

A: [Hops out of chair, scurries over to my chair, grabs my purse, and begins rummaging through my belongings]

A: [Laughs maniacally and returns to seat]

K: OK, I get that you’re bummed about the show drawing to a close, but you don’t have to take it out on me.

A: [Rubs stomach and points at mouth]

K: Do you want a croissa— WAIT. Did you start going through my bag because you smelled the Coconut Chocolate Chip Clif Bar I was saving for later?

K: Wait, didn’t you just inhale a loaf of bread like, a minute ago? Or did I imagine that?

K: I’m not going to give you my Clif Bar.

A: [Reaches in vest and pulls out a Coconut Chocolate Chip Clif Bar]

K: Are you kidding me?

K: I guess I’m too impressed to be mad. Whatever. You can have it.

A: [Unwraps the Clif Bar, takes a comically small bite, cringes, and throws the rest of the bar on the ground]

K: Jeez, you seemed so much nicer in the movies. Anyway, have you seen Frozen?

K: Will you watch the Frozen stage show?

A: [Nods and gives two thumbs up]

K: Did I do something to offend you?

A: [Pantomimes looking at a wristwatch]

K: OK. Thanks for your time.

A: [Climbs across table and extends arms out]

K: Uh, forgive my complete and utter shock, but you want a hug?

I remained at the table for a few more minutes. I jotted down some notes and considered ordering another iced coffee. As I started packing up my belongings, Abu returned to the table.

K: I don't have any more Clif Bars.

A: [Hands me a folded up piece of paper]

A: [Points at piece of paper, waves goodbye, and leaves the coffee shop a second time]

I unfolded the piece of paper and found a note. The message was written in what might be the most beautiful penmanship I've ever seen. Here's what it said:

Please forgive me for how I acted today. The Magic Carpet put me up to it. I don't want to bore you with the details, but Carpet and I made a bet about something. The loser of the bet would have to be a complete nincompoop in an interview. Carpet won the bet. I lost the bet. And the rest, as they say, is sugar packets in the air.

I'm very sad to see Disney’s Aladdin: A Musical Spectacular go, but I have high hopes for this Frozenshow. Great source material. I hope "Do You Want to Build a Snowman?" makes the cut. That's my favorite Frozen song.

Again, I am so sorry. I hope it wasn't a complete waste of time.