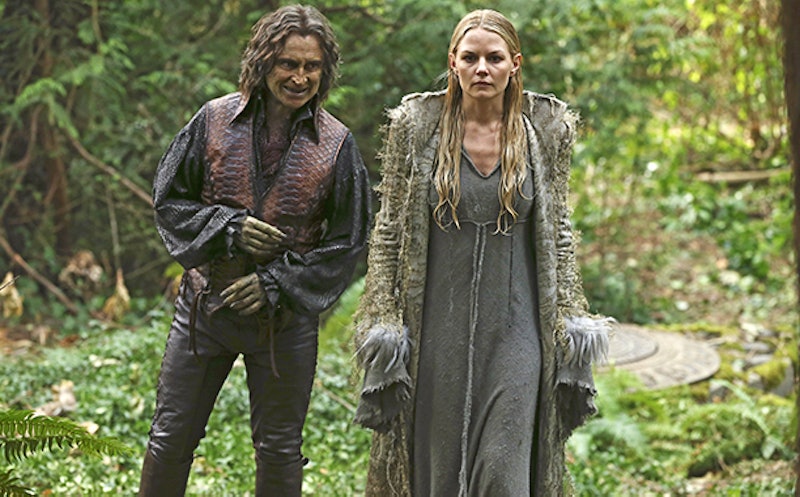 We're just about two weeks away from the premiere of Once Upon A Time Season 5, and it's clear from the buzz the series has been getting that this could be the most intense and explosive season yet. There are so many things to look forward to — going to Camelot, meeting Merida, and witnessing Henry's first crush among them — but I think it's safe to say we're all here for Emma as the new Dark One. ABC has dedicated much of their promo to the whole Dark Swan scenario we'll be faced with come September 27, and for good reason. After all, there's nothing more exciting (or terrifying) than the former Savior suddenly taking on the most powerful dark magic in the known universe, right? And while we don't necessarily know the specifics of how it's all going to go down, we do know more Dark Swan details thanks to executive producers Adam Horowitz and Eddy Kitsis, who seem to love torturing us (in a nice way, of course).

In an interview with Entertainment Weekly posted on Friday, Horowitz and Kitsis answered a few of the fans' more pressing questions about Emma's new Dark One status as vaguely as they could so as not to give anything away, which I suppose is better than nothing. Here are a few things we know for sure about Emma's new identity — take from them what you will.

Darkness will slowly consume her

We watched Rumple get darker and darker, and we'll get to see that journey with Emma, too. As Kitsis explained, "We’re going to see her struggle against this very dark thing inside her, and we’re going to see what happens." Ugh, I'm both excited and sad!

Emma didn't travel back in time

We sorta knew this already, but Horowitz has confirmed once and for all that while Emma may have ended up in the Enchanted Forest, which is another realm, she's certainly not in another time. "We’re not doing time travel," he said. "We dipped our toe in that. It was fun." Well, that's a relief. It still doesn't explain how she got there, but that's what the show's for!

She'll provide historical context for the Dark One

We've seen three Dark Ones throughout Once's run thus far, but we don't really know where the Dark One came from, why it was created, how to get rid of it (or if it's even possible, etc). Luckily, through Emma, we'll get to know all that in Season 5. According to Kitsis, "Emma is going to be taking us into the Dark One and the Dark One mythology, and we are going to learn this first half of the season who the original Dark One was, what made them tick, and why there is even a Dark One to begin with."

While the darkness will indeed attempt to consume Emma and will likely make her forget the best parts of herself for a while, much of what she'll go through is still going to be true to who she is. "I would say that Dark Swan is an extension of Emma and an exploration of who she is," Horowitz teased. "Just like when Rumpelstiltskin became the Dark One, it became an extension of all the character traits, flaws, and strengths he had."

The dagger has great power, considering it can control the Dark One and eventually kill her. Emma would likely want to pick someone she trusts entirely to hold it (read: Regina), but that may not be the person who ends up taking it out of greed. As Kitsis, explained, "You want to trust the person who has your best interests at heart, but in the same respect, who would you say has the ability to unplug the machine? Meaning who’s the person that’s going to make the right decision at the right time? Emma’s the Dark One, and so who she gives that knife to... Or who takes the knife has a lot of meaning and emotion but also some practicality to it." Ugh, Hook, go away.

Her predicament will cause drama for Snow and Charming

Emma being the Dark One means the Savior needs saving, and how they go about that might tear her parents apart. "For the very first time since season 1, we’re going to really see them disagreeing about the best way to save their daughter," Kitsis said. "And it is absolutely like any parents with a child: when you don’t know how to save the child, it causes a lot of stress at home." Yesssss!

From all the sneak peeks we've had so far, Season 5 might be the best yet for Once Upon A Time, and I seriously can't wait.

More like this
Wait, What’s Going On With Ben In That Umbrella Academy Season 3 Post-Credits Scene?
By Gretchen Smail
Did *That* Character Really Die In The 'Stranger Things' Season 4 Finale?
By Grace Wehniainen
Everything To Know About The Summer I Turned Pretty Season 2
By Kadin Burnett
20 Photos Of "Beefy" Jeremy Allen White To Tempt You To Watch 'The Bear'
By Radhika Menon
Get Even More From Bustle — Sign Up For The Newsletter