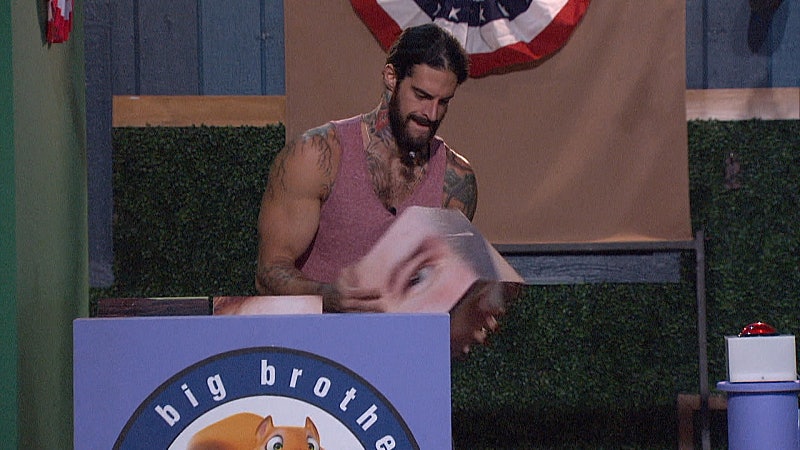 The only thing creepier than Austin’s beard bun in the Big Brother 17 house is the ridiculous stuff that he has been known to say. As if a scraggly bundle of face pubes wasn’t bad enough, Austin has been saying some really shady stuff on this season of Big Brother. It’s enough to make anyone's interest in his tattoos and muscles shrivel up and die.

I don’t know how Liz handles it. Maybe there is something in him that we haven’t seen? Of course, this is highly unlikely considering it’s a show where viewers have 24/7 access to the houseguests’ every action and word, but hey, I don't know. All I know is that the stuff that comes out of that man’s mouth would be enough for any decent person with a Tinder account to swipe left on.

I mean, just imagine how quickly you would say “next please!” if you saw quotes like these in someone’s Tinder profile. These are Stage Five Creeper kind of quotes, everyone. Don’t be distracted by the muscle and the intelligence! Swipe left. Do not pass go. Do not collect $200. And definitely do not let him talk you into going on a first date.

1. “Put A Patient Under, And The Next Thing You Know…”

No, I don’t know, Austin. But I am pretty sure that when you said this to Johnny Mac after asking if the dentist had ever slept with any of his patients, you were making a date rapejoke.

2. “If A Tree Falls In The Forest And No One Is There To Hear It, Does IT Make A Sound? I Have Often Answered This Question With The Word No, But Perhaps I Should Have Been Asking A Much Larger Question… What Is A Sound?”

Tell me you wouldn’t run screaming into the woods if you read this on some guy’s dating profile. Pretty sure this opening line to Austin’s HoH letter is enough to make any girl swear off men and live in solitude for the rest of eternity.

3. “I Have My Princess In The Castle Waiting For Me At Home.”

No, Austin. She is not your princess, and she is definitely not waiting for you at home. Not anymore.

4. “Steve Should Have Grabbed Liz’s Goods When He Had The Chance. Don’t Worry. I’ll Let Him Know What They Feel Like.”

‘Cause every girl loves a guy who gropes and tells.

5. “Sneak Liz Some Shots, Or Get Some Extra Margaritas Going… So It Makes Her Easier. Hook Me Up!”

I’m going to go out on a limb and say that any mention of date rape would probably be enough to swear off online dating for good.

Austin said this about wanting to get to the jury house with Liz, but as much as I do know what he’s talking about, I really, really wish I didn’t.

7. “I Don’t Want To Pressure Her, But I’m Going To Be A Little More Forceful.”

What is with this guy and the date rape jokes? RED FLAG, girl. RED FLAG.

So just in case Liz and Austin don’t make it outside of the Big Brother house, and you find this creeper lurking on your phone screen, just swipe left, mmk? There isn’t anything worth seeing here.