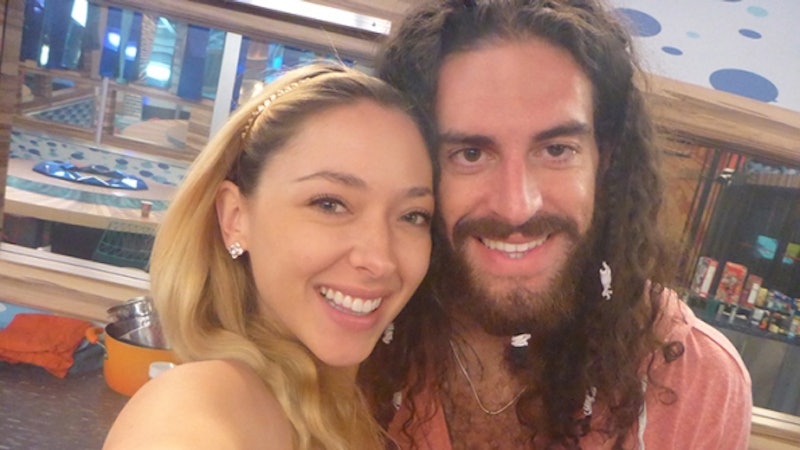 If you're anything like me, then there are no words for the severe amount of awkwardness and secondhand shame that you feel watching Austin Matelson and Liz Nolan's showmance on Big Brother 17. It all started with an obsessive crush on Austin's part that reminded me way too much of Caleb Reynolds' obsessive crush on Amber Borzotra from Season 16. At first, Liz flirted with him in order to use him as a tool in the game, while Austin was busy switching his relationship status with his girlfriend to "open" and planning to get himself and Liz to Jury House so they could finally be alone. Eventually, Liz began to return his feelings, and the two have moved on to being the most uncomfortably handsy showmance in the house — much to Julia's dismay. But what about Austin's girlfriend? Did Austin's girlfriend break up with him while he was in the Big Brother house?

Well, first of all, if I was her, I totally would. But there's a legitimate basis for the question. When Austin won Head of Household for the first time, he received a letter from his girlfriend as his HoH letter, to which he responded, "Oh, I guess she's still my girlfriend.” After that underwhelming reaction, he proceeded to continue to aggressively pursue Liz like she was the last ponytail beard comb at the flea market. However — spoiler alert — Austin won Head of Household again on Thursday night, and, this time, his HoH letter made no mention of his girlfriend back home at all.

Does anyone else feel as awkward as I do about this? While the woman in question is trying to stay out of the limelight as much as possible (and, considering what's going on, I would, too), Internet investigators have found that she has allegedly since changed her profile picture from a picture of herself and Austin to a picture of herself alone. Of course, she's also still listed as in a relationship, so who even knows anymore? Was she trying to send a message, or was she just trying to reduce the number of people who might find her on Facebook? And, if the latter is true, why was no mention of her current status (or agreement that Austin is in an open relationship with her) made in the HoH letter?

I'm not the only person who is looking upon Liz and Austin with a critical (and slightly disgusted) eye. Blessed Voice of Reason Julia, who has been over Austin and his BS since even before she came into the house as a player, was bitterly complaining to Liz and Vanessa that she hoped Austin's HoH letter was from his girlfriend. (Which, for those keeping track at home, means that Liz is fully aware Austin has a girlfriend he is in an "open relationship" with and has been this whole time.) Because Blessed Voice of Reason Julia is as creeped out by the attention Austin lavishes on Liz as we are, especially since it comes from a man who is already attached to someone.

Of course, this logical pep talk had absolutely no effect on Liz, as evidenced just a short while later:

At the end of the day, one missing mention from an HoH letter does not the end of a relationship make. I don't think that Austin's girlfriend, if she hates Austin and Liz's showmance as much as we do, would dump him while he's in the Big Brother house and unaware that he's been dumped. And it's entirely possible that they really are in an open relationship, and all of our criticism is unfounded. Until the woman herself comes forward, however, I'll keep side-eyeing Austin and Liz like they personally offend me. Because, half the time, they really do.

More like this
Twitter Is Still In Hysterics Over 'Love Island's Chaotic Heart Rate Challenge
By Frances Stewart
Bachelor Nation's Blake Horstmann Is Dating 'Love Is Blind' Star Giannina Gibelli
By Jake Viswanath and Radhika Menon
The 'Love Island' Contestants *Do* Know Who Gemma's Dad Is, After All
By Bustle UK
Everything We Know About Gemma & Jacques’ Relationship – & Break-Up
By Frances Stewart
Get Even More From Bustle — Sign Up For The Newsletter