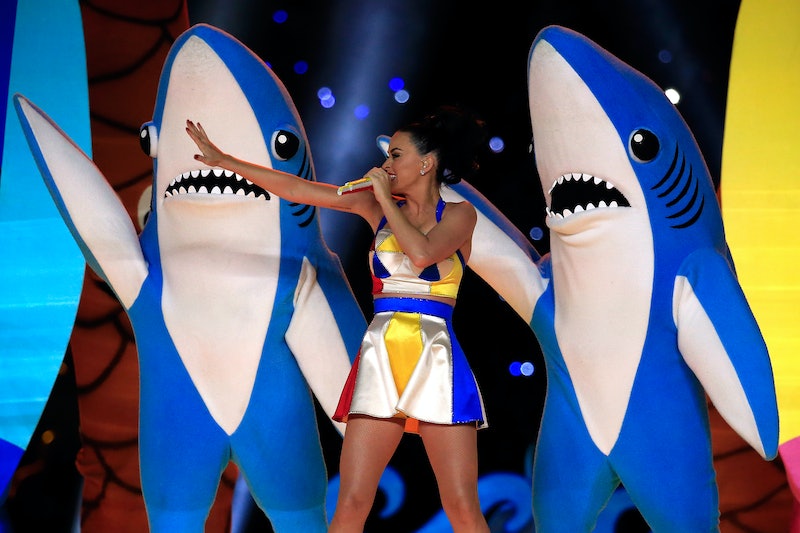 I'll be honest with you: I hate sports. That being said, the Super Bowl Halftime Show is a pretty big deal for everyone, especially people like me who hate football but want an excuse to watch the big game since it's a major event and it sucks not being in the know. Last year's show was right up my street because, as I'm sure we all remember rather vividly, Katy Perry was the headliner. She also brought on Lenny Kravitz and Missy Elliott to help her out during her set, but Perry was the real star of the 12 and a half minute performance, which left us all talking about it for days after it was over. If you're still feeling nostalgic for Left Shark, you're in luck: Perry is releasing a halftime show "making of" documentary, and it's going to be great.

Katy Perry: Making of the Pepsi Super Bowl Halftime Show will premiere at the La Costa Film Festival this weekend, giving fans a behind-the-scenes look at just how much goes into putting on such an explosive show that's watched by millions of people around the world. The John Hirsch project pulls from over 100 hours of footage of Perry prepping for the Super Bowl and delves into just how difficult such a performance is to pull off. Basically, it sounds amazing, especially since there are quite a few things I'd love to know about the whole thing.

Left Shark is a pop culture icon at this point, and while it's unclear whether or not the unintentional mascot will be featured very prominently (or at all) in the documentary, he damn well should be. More Left Shark! I demand it!

How many hours did she have to rehearse?

Obviously preparing for something so monumental must have taken a LOT of preparation, but how many hard hours did Perry actually put into her halftime show performance? I'm pretty sure we'll all be shocked by the answer.

Was it the highlight of her career so far?

I know Perry has accomplished a ton of amazing things in her career already, but not just anyone gets to perform at the Super Bowl, and it has to be a serious highlight, if not THE highlight. Would she say this is her biggest accomplishment thus far?

Did she throw up before she went on stage?

I don't know that Perry has ever said much about suffering from stage fright, but even the most steel nerved among us would likely feel sick to our stomachs just thinking about pulling off something so huge. I feel like I need to reach for the Immodium just thinking about it.

Would she perform at the Super Bowl again?

There's been talk that Bruno Mars may be brought back for the 2016 broadcast, but Perry's was watched by even more people than his, so why not bring her back again? I suppose twice in a row is a bit much, but I know I'd watch it!

Watch the trailer for the documentary below and relive all the glory, because it was pretty good, you have to admit!