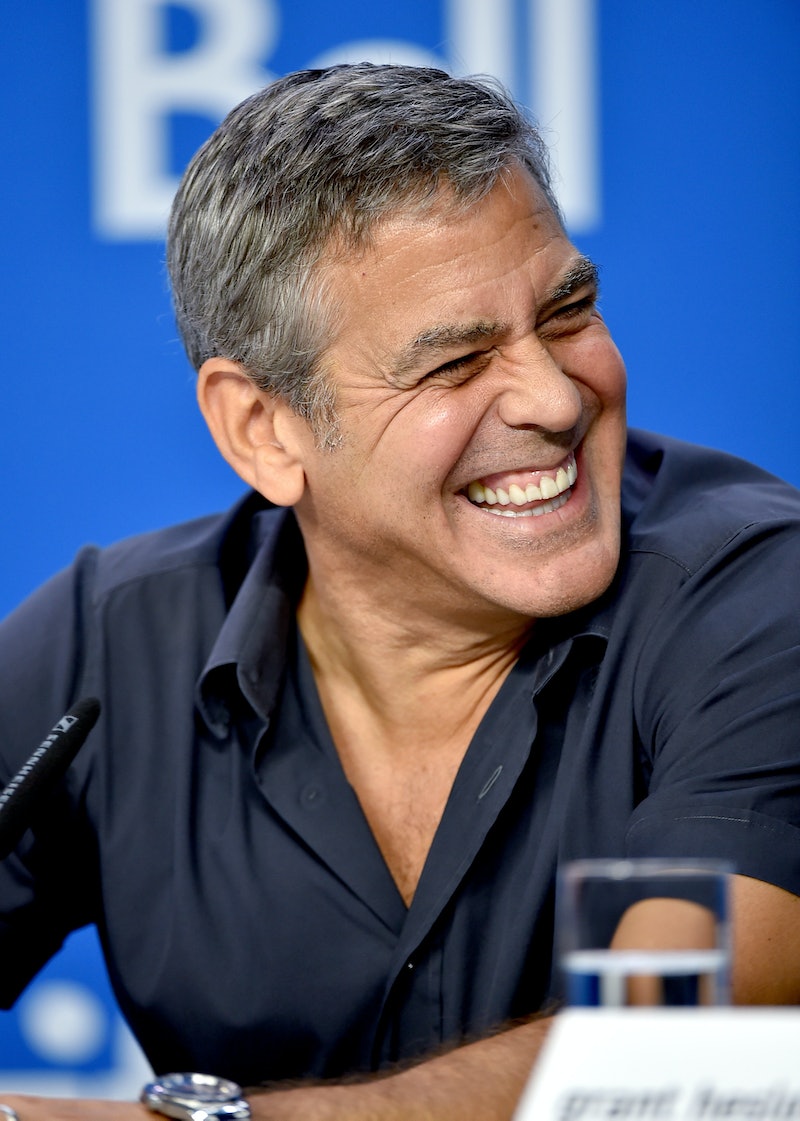 Fun fact: The new film Our Brand is Crisis, which stars Sandra Bullock and is produced by George Clooney, had a bit of a genderswap moment pre-production. Clooney, a co-producer on the film, was actually set to play the starring role — that is, until Bullock got a hold of the script. Yep, Bullock's role was written for a man, before she approached Clooney and director David Gordon Green about rewriting the character as a woman. But, it looks like Clooney might have had his eye on one of Bullock's most notable roles from 15 years ago, so hey — maybe they're even.

While speaking to reporters at the Our Brand Is Crisis press event during the Toronto International Film Festival, Clooney was asked which role of Bullock's he would have gender swapped with himself. The star joked, "I think we all know it's Miss Congeniality. I didn't have to answer it cause you were thinking it."

"And you've seen his legs," Bullock brilliantly chimed in.

Have we?! When? I need to be reminded of this. In one final closing statement to end all closing statements ever, Clooney retorted, "I can rock a swimsuit better than anybody. A one piece, not a bikini. I'm 54."

This has me thinking about something important (other than Clooney in a one-piece): What other famous Bullock roles could Clooney have taken over?

I would have killed to see Clooney as a witch.

A father-daughter relationship between Clooney and a young Mae Whitman would have been swoon-worthy for sure.

A Keanu Reeves and George Clooney duo? How was this not happened?

Divine Secrets Of The Ya-Ya Sisterhood

Alright, this one mightn't have worked so well.

I'm sure Clooney would have given us an excellent, probs Oscar-worthy performance here, but nothing tops an angry Sandra Bullock.

Please take a moment of silence to picture Clooney singing "Get Low" in the middle of the woods.

Not sure if he could have mastered a Southern accent in time. Also, can he pull off blonde? Serious questions.

He was already in this and I guess technically the two could have switched, but there was something so poignant about Bullock's performance, that I wouldn't have had it any other way (even if that meant more time for me to stare at Clooney's face).

All jokes aside, this is a big step in the right direction for more equally distributed male and female roles in Hollywood, and I can't wait to see Bullock in action.