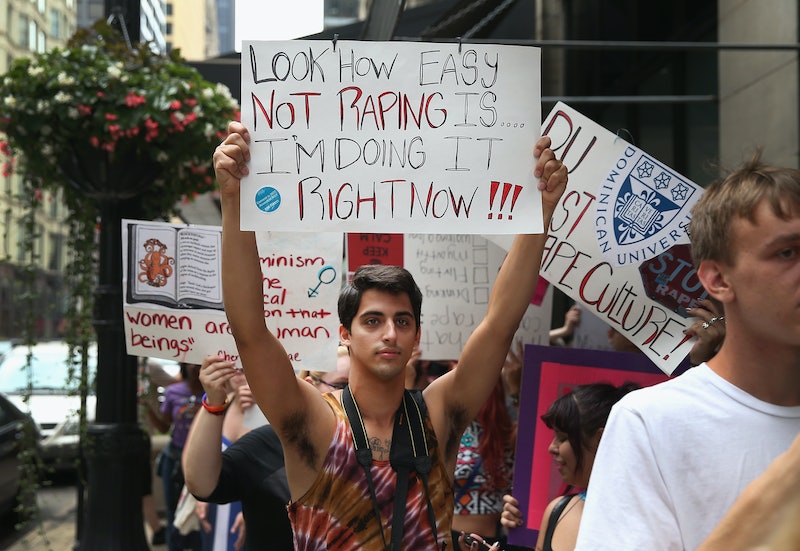 In the past few months, a number of female students at colleges and universities across the country have filed federal complaints about their schools’ handling of reported sexual assaults. We’ve seen it at UConn, the University of Southern California, Occidental College, Amherst College and so many others in between.

But now, some college men who are accused of sexual assault and rape on campus are using the same tactics as victims to fend off these accusations. A trend of male students are also citing violations, saying universities are violating Title IX in their handling of the cases, but they argue that they are the victims. They claim that sexual assault investigations are biased in favor of their accusers, the majority of whom are women.

Bloomberg News reports that in the past couple of years, male students at Xavier University, Vassar College, Williams College, Bucknell University, St. Joseph’s University, and College of the Holy Cross have all filed discrimination cases in response to being expelled or receiving some other kind of discipline after being accused of rape.

Nicole Colby Longton, an attorney who represented a student who sued Holy Cross for being accused of sexually assaulting a woman on campus, told Bloomberg News that young men face a “growing risk of being accused” on college campuses.

“One sexual encounter that involves alcohol, and the next thing you know you’re accused and expelled and branded for life,” she said. “Schools are going to push kids to have signed waivers before they have intercourse.”

Excuse me for stating the obvious, but this is a pretty warped idea of what Title IX is actually intended to do. The whole purpose of Title IX, an amendment to the Higher Education Act of 1965, is to protect women from years and years of deeply ingrained prejudice and resulting discrimination, not defend alleged attackers.

What Longton unfortunately doesn’t seem to understand is that there isn’t a “growing risk of being accused” for men so much as there is a high risk of being raped for women, and a growing effort to hold rapists accountable. According to the Rape Abuse & Incest National Network, there are about 237,868 reported victims of sexual assault every year, but only 60 percent of these assaults get reported to police, and 97 percent of rapists will never spend a day in jail.

Sure, there have been a tiny number of false accusations of rape, but considering the humiliation and scrutiny that most women who report rape unfortunately endure — the same humiliation that keeps most sexual assaults from ever being reported — do we really think that's what's going on in all of the incidents about which these accused college students are complaining? Logically speaking, I don't think so.

Rape poses a real threat to women on college campuses, and even if these young men are innocent, their claims reveal a desire to maintain a status quo that makes it easy for men to perpetrate crimes and difficult for women to report them. It's one thing to protest that you were wrongly accused. It's another to suggest that universities are making it too easy for victims to report crimes and seek justice.

And for those who are guilty, maintaing that status quo won't help. Maya Dusenbery, an Executive Director at Feministing, put it best when she wrote recently, “If you sexually assault someone, you — you and no one else — have made yourself guilty of a crime — whether it is ultimately punished by the criminal justice system or a campus sexual misconduct board, or not at all.”

More like this
24 History-Making Black Women You Probably Didn't Learn About In School
By Ayana Lage and JR Thorpe
25 Inspiring Quotes From Black Women To Celebrate Black History Month
By Kyli Rodriguez-Cayro and JR Thorpe
6 Organizations Fighting Police Brutality That You Can Support Right Now
By Syeda Khaula Saad and JR Thorpe
Watch Jacinda Arden’s Devastatingly Honest Resignation Speech
By Sam Ramsden
Get Even More From Bustle — Sign Up For The Newsletter
From hair trends to relationship advice, our daily newsletter has everything you need to sound like a person who’s on TikTok, even if you aren’t.