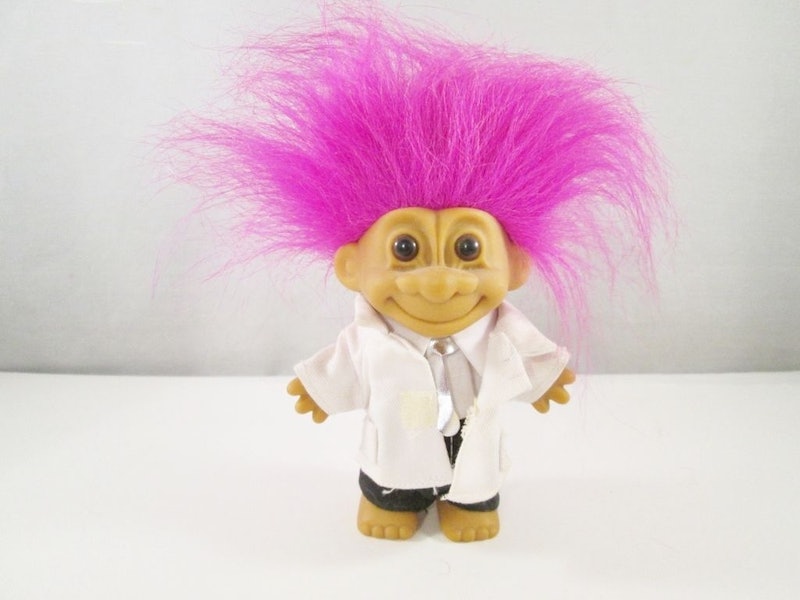 Any time I find myself at a family gathering with my close-in-age cousins, talk invariably turns nostalgic. We fondly discuss our childhood, as '90s kids are wont to do, which always leads to the same question: What was up with all of those weird '90s toys? The vast majority of what we played with growing up fell somewhere on the spectrum between mildly creepy and potentially fatal, with the occasional questionably mature items wedged in there for good measure. Having said that, I'd basically be willing to barter my eye-teeth to get my hands on some of my beloved childhood favorites, dubious and bizarre though they may be. After all, there's a reason the '90s is experiencing such a major revival right now — you couldn't grow up in a better decade, and at least some small part of that is due to the awesomely bizarre toys with which we kept ourselves entertained.

So join me, dear friends, in taking a stroll down memory lane... won't you? Watch your step, though! We're headed past the stupidly dangerous '90s toys like ankle-maimers and Moon Shoes and headed straight for 10 wacky, yet wonderful '90s toys we all wish we still had. And by we, I obviously mean me.

Produced by Kenner from 1994 to 1995, these plush animals with tiny tummy compartments rocked my jellies off. Never mind the fact that the creepy slogan promised to "keep secrets safe just for little girls" or that the lockable jeweled compartment was likely later misappropriated by teens who confused "hide your tokens" with "hide your toking" — I still think they're adorable. Besides, they'd make a great safeguard for the ballpoint pens someone keeps jacking from my desk.

Somewhere, someone in the '90s said, "Hey, you know what would be super fun? If we made a game that encouraged small kids to stick their tiny limbs into the gaping jaws of a crocodile and yank on his teeth!" It'll be fun, they said. Just stick your hand in its mouth, they said. At which point all the other adults in the room apparently nodded in unison, because this game was all the rage back in the day. Nevertheless, the circa 1990 Milton Bradley game offered hours of fun and the bruised phalanges to show for it. If you're feeling froggy, you can pick up a newer, smaller incarnation currently in production. But, in full disclosure, revision included tweaking the length and speed of the croc's lunging motion so as to avoid eye injury and adjusting the verocity of the snapping action to minimize hand damage. I know, I know... spoil sports!

In 1991, a board game for girls was released by which they would dial a number, listen to a series of clues emanating from the giant pink phone, and try to guess the identity of their secret admirer. In retrospect, it kind of sounds like the start of a campy horror movie franchise. Aside from that, what a lovely way to spend the afternoon — vying against your best friends for a fictional love boat who's defining characteristics include not liking pizza (What a rebel!). Still, this sounds like a hilarious way to spend a Saturday night with your grown up biffles and a bottle of wine. And, let's face it, perhaps just as worthwhile an endeavor as swiping left 72 times in a row.

If a Happy Meal toy and a Transformer met, fell in love, and had little plastic puzzle babies, they'd be McDonald's McDino Changeables. Which, it would seem, is precisely what happened during the summer of '91, when these dinosaur-like little gizmos hit the market. Was it strange we spent our afternoons playing with McNuggets-O-Saurus and Hot-Cakes-O-Dactyl? You betcha. But now that we are all adult-like and realize the food these fellas are modeled after has enough preservatives to turn us into plastic gadgets, we tend to devour decidedly less of it than we did during the '90s. Changeables would at least let us relive the glory days of indulging in the special-sauce-laden wonders of the Golden Arches.

This plush toy could very well have served as the official mascot for The Future Veterinarians of America Association. (Which is totally not something I just made up. I swear. OK, yes, it is.) Interestingly enough, though, even children with little to no occupational inclinations of the kind were drawn to this plush dog, whose main draw was that you could perform a crude C-section in order to determine how many puppies she was having. Kinda gross, you guys. The situation was made all the more alarming by just how disappointed one was if fishing around the mommy dog's belly only turned out a paltry three offspring. It's a good thing Puppy Surprise keeps coming back into circulation, because I'd like to pick one up if for no other reason than to apologize. I'm sorry I didn't respect your life choices, Popcorn... you rock on with your three-puppy womb.

At first glance, you might wonder why Miss Party Surprise — a cutesy doll with a plastic skirt base — was only in production for a few years, from 1999 to 2002. Then, you might open up her bulky skirt base to reveal the myriad choking hazards hidden cleverly beneath the bustles and think, "Ahhhh." I don't necessarily wish they would bring this strange little doll back into circulation so much as I wish they would replicate her outfit IRL. Think about it: It's like having a handy-dandy multi-tool for a skirt.

What do you mean there are no practical applications for plush toys that smell like candy? The white kitten one smelled like peppermint. Peppermint has proven aromatic properties of relaxation. Do you have kids? They're crazy. Clearly, these toys were onto some next level stuff, y'all. My personal favorite was Jellybean Bunny, but I was also quite fond of Cotton Candy Poodle. Perching one of these on my desk to sniff in times of stress could only make me more productive, right? I feel certain some incredibly astute person somewhere is studying the medicinal effects of cotton candy aromatherapy as we speak.

Originally conceived by Tim Clarke, Maureen Trotto, and Larry Mass in the late '80s, Boglins were meant to capitalize on the monster creature craze of the time. And while the earliest incarnations weren't too terrifying, the '90s versions were alarmingly realistic and horrific. True story — my brother had a Boglin named "Dwork," and it haunted my dreams. Looking back, these grotesque guys were actually kind of cute peering out of their caged cardboard crates with their glassy eyeballs. There's no telling how many acts of retribution I could pull off against my unwitting brother if I could get my hands on a Dwork of my own.

C'mon, now. You know we couldn't possibly create a list of weird '90s toys and not include that wondrously weird hallmark of our childhood known as the Troll doll, do you? When you think about it now, these oddfellows really weren't that strange. Bejeweled belly buttons, brightly colored hair — I've seen more notable things on the subway platform. But aside from being super cute tabletop tchotchkes, wasn't there some mythology about these little mohaired nudists being magical? 'Cause I could use all the luck the universe wants to send my way. Though there have been many productions of troll dolls over the years, I'll always have a special place in my heart (and on my desk) for the troll doll fads of the '90s. Battle trolls? Yes, please!

Call me crazy, but there was something oddly comforting about pushing, pulling, squishing, and stretching this thick, gooey substance around. Now you can make your own Gak, thanks to a proliferation of copycat recipes on Pinterest, but will it have that distinctive Gak odor? Doubtful, you guys. Doubtful. The original recipe was potent and provided the kind of pure joy that can only come from making fart noises, er, "Gak sounds" with an artificially colored ball of fishy smelling goo. Am I right or am I right? I rest my case.