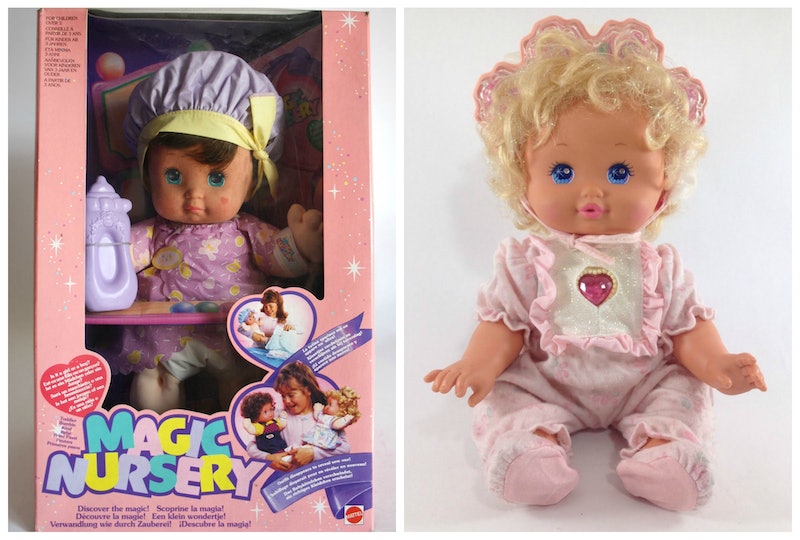 I have no idea what the world of children's dolls is like these days, but back when I was a kid, it was surprisingly awesome. And I'm not talking just about American Girl dolls, or Quints, or Spice Girl dolls, or any of the eight million kinds of Barbies we've all gotten nostalgic about again and again and again; I'm talking about all those dolls from the '90s you totally forgot about. It seemed like every new doll that was produced during that decade — and during the '80s, as well — had a new gimmick, and somehow, each one managed to be more creative than the last. Exactly how does one dream up a doll that can shoot stickers out of her stomach? Or rollerblade on her own? I honestly have no idea, but whoever you are, I applaud you.

Typically nostalgia posts on the Internet — especially the ones about toys — tend to be full of the same sorts of things over and over and over again. So today for Throwback Thursday, let's take a look at the unusual suspects — the toys you may not have thought of in decades. I had a whole slew of memories from my early childhood come rushing back while I was putting this one together, so I can only hope that you do, too. Because nostalgia is always best when it's shared, isn't it?

Tyco released My Pretty Ballerina in 1990, and even though my ballet phase was rather short (gymnastics was more my speed) I desperately wanted one. I was endlessly fascinated by things that looked they were alive, but weren't actually alive — and My Pretty Ballerina's dancing abilities fit the bill magnificently. I still am fascinated by things that look alive, but aren't, by the way; at least now I know about the uncanny valley, though.

Released in 1993, Sally Secrets was a cyborg from the future who functioned sort of like the Inspector Gadget of arts and crafts. She spat stickers out of her torso and hid a roller stamp and an ink pad in her feet, enabling those under her protection to create all the armor they needed to protect themselves from the robotic foot soldiers chasing them down.

Wait — sorry, no. That's the plot of The Terminator. But Sally Secrets did provide hours of enjoyment with her hidden stickers and stamps.

In the late '80s and early '90s, Mattel had a series of hits with their L'il Miss dolls. Each of them transformed in some way, shape, or form, typically using some sort of temperature-sensitive, color-changing technology: L'il Miss Makeup used water to make things like eyeshadow and heart-shaped beauty marks appear; L'il Miss Magic Hair's long locks turned neon colors with an ice-powered “brush”; L'il Miss Magic Mermaid changed color and sang when you put her in the bath; and so on and so forth. I had L'il Miss Magic Hair, mostly because I loved being able to practice my French braiding skills on dolls with impressively long manes. The practice paid off; back in the days when I wore my own hair ridiculously long, I had a surefire way to keep it out of my face.

Although I doubt the My Pretty Mermaid dolls were intended to be bath toys, that's exactly what I did with mine. Like My Little Ponies, each mermaid doll had a distinctive symbol on her fin; however, they would only appear when you splashed them with water. Also, duh, mermaid dolls plus bathtub equals the best bath time ever. First produced in 1991, they came in a number of different variations, from princess mermaids to mermaids with sunglasses. And hey, remember that My Little Pony connection? The commercial jingle for My Pretty Mermaid sounds surprisingly similar.

I'm cheating a little bit here; the Rose Petal Place animated movie and its accompanying line of toys were first produced in 1984, not during the '90s. Oddly enough, I don't remember either owning any of the flower-themed dolls or seeing the film but I did have a Rose Petal Place picture book that I absolutely adored. I also had a weird habit of absolutely needing to eat pastina and egg whenever I read it, a quirk which developed entirely due to my love of the fact that “pastina” rhymed with “Nastina,” the name of the franchise's villain.

I was a strange kid.

Another cheat, Lady Lovely Locks was in vogue between 1987 and 1989. What I find most hilarious about the whole concept is that it's literally about a kingdom known for their residents' fabulous hair. I also recently learned that the accompanying cartoon — because, like so many other toy franchises, it was all just one big marketing opportunity — was apparently produced by the same animation studio behind Jem and Rainbow Brite.

And just for good measure, here's another '80s doll: 1988's PJ Sparkles. I have incredible vague memories of making my darkened bedroom less freaky with a light up doll, so I may have had one growing up — but given that I was three at the time good ol' PJ was at her prime, it's always possible that my memory is faulty. She also had a younger sister named Baby Sparkles. Or at least, I assume she was a baby sister; PJ looks like a kid, so she couldn't possibly be Baby Sparkles' mom, right?

For the curious, here's Baby Sparkles:

Wow, man. If you happen to have a Magic Nursery doll still in its box hanging around somewhere, you might think about selling it — they go on eBay for around $250. The gimmick with these suckers was kind of similar to Puppy Surprise's (minus, y'know, the puppy thing): You didn't know what you were going to get until you opened the doll up. In the case of Puppy Surprise, it was how many puppies your purple stuffed dog had in its fluffy little womb; and in the case of Magic Nursery dolls, it was whether you had a boy or a girl — or even twins. I did not have one of these dolls growing up, so I never experienced the wonder of finding it all out for myself; from what I gather, though, it involved putting the paper gown your doll came with in a dish of water, waiting for it to dissolve, and then pulling out a pretend birth certificate and a set of clothing from the water. Fun times.

I don't know why, but I find 1991's Baby Rollerblade infinitely creepier than My Pretty Ballerina. Maybe it's just the super trippy commercial:

Produced by Kenner between 1993 and 1995, Fairy Winkles were kind of like Polly Pocket — but instead of a fun-loving girl and all her friends who lived in palm-sized plastic prisons, they were naked little fairy figurines who liked to hide in baskets, clocks, and flowers. They weren't really my jam, but then again, I wasn't really into fairies as a rule.

The operating principle behind Baby Tumbles Surprise was simple: She was just weighted in a way that made her do a full ninja roll whenever you tipped her forwards. And yet, sometimes the simplest things are the most enjoyable; she was kind of like a human-shaped Slinky, which made for a substantial amount of entertainment. However, she appears not to have aged terribly well — the versions of her for sale on eBay look a little terrifying:

In retrospect, Playskool's 1992 Krystal Princess dolls were actually kind of troubling. I mean, their only purpose was to remain trapped inside a plastic snow globe until the Powers That Be — that is, you — decided that they were worthy of being set free. It's weird, right? Because I definitely feel like that's weird.

But then again, maybe that's just me. Snow globes are still pretty cool.

I had totally forgotten about the name of this line until I started doing the research for this post, but now I'm all awash in nostalgia. Produced by Galoob starting in the mid-'80s and continuing on through the '90s, Sweet Secrets got much more elaborate as time went on; initially, though, they were just colorful lockets decorated with plastic jewels that transformed into both people and pets when you unfolded their innards. Think wearable Transformers, with pigtails.