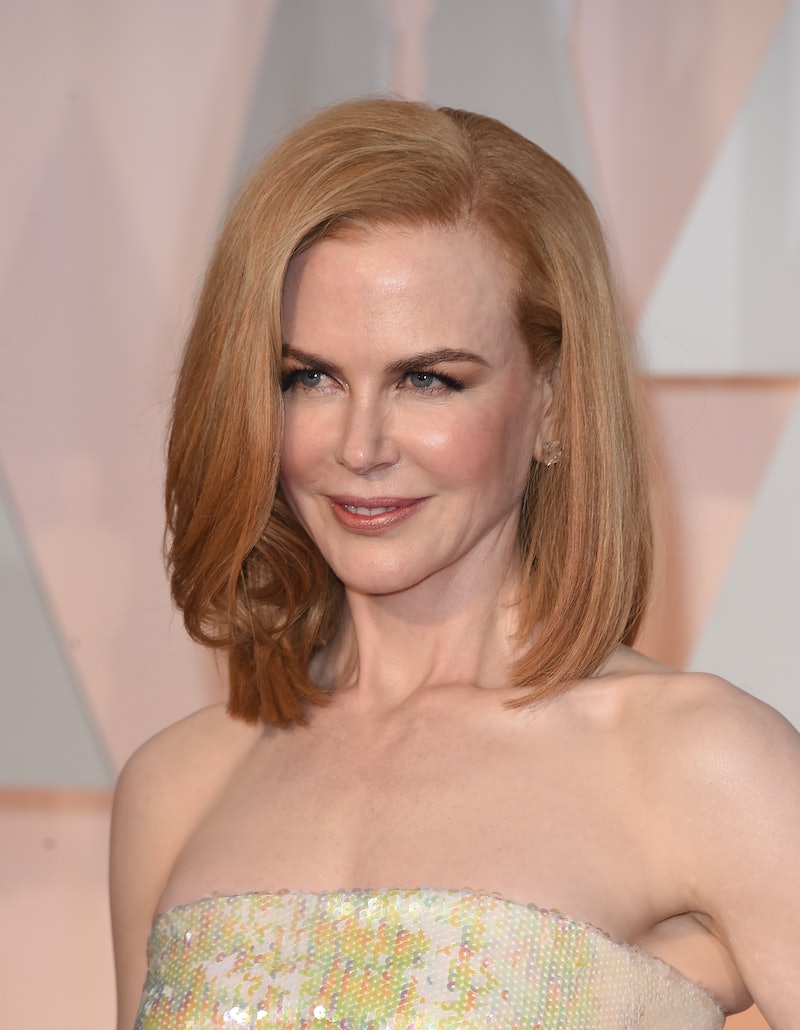 Premiering her latest stage project, Photograph 51, Nicole Kidman wore a gorgeous pant suit Monday night in London. Her sleek and modern black-and-blue ensemble very much aligns itself with the focus of the new play she is fronting, which, in turn with Kidman's sartorial choices, is a perfect match.

The play revolves around Dr. Rosalind Franklin's (Kidman's character) contributions to discovering the DNA double helix structure, which was subsequently credited to Francis Crick and James Watson in 1953. The themes of equality and feminism mean that Kidman's character suits her well. And, yes, that's a total pun. Because the literal suit she wore to the premiere of the play couldn't have been more fitting.

There's no doubt that Kidman is one of those red carpet regulars who continuously surprises with her fashion choices and looks absolutely beautiful no matter what. The androgynous black and blue Hugo Boss suit she wore to the premiere was both a smart choice, and a gorgeous one. Her jacket and pants were both tailored to fit her long, lean frame perfectly, and the plunging neckline of the jacket showed just the right amount of skin to maintain her alluring demeanor. Kidman also wore strappy heels that were a perfect choice to even out the striking silhouette of the suit. And her other accessories, including her Omega watch and dangling earrings, were kept simple and pristine, perfect alongside the black and blue suit.

Not only does Kidman's character in Photograph 51 make a statement for equality between sexes, but so does her ensemble for the premiere last night. Sure, she could have worn a pretty dress or a sparkling skirt, but she didn't. Instead, she went for something a bit less conventional. And you know what? She looked absolutely stunning in it. Even though that's not much of a surprise when talking about Kidman, because let's be honest, she always looks amazing. But it's definitely a smart, clever choice that certainly makes a statement.

Dior is a no-brainer for a red carpet event, but Kidman wears this gorgeous embroidered dress effortlessly (note Tom Cruise).

Oh, the '90s. Somehow, Kidman made a scarf shirt with an open back, a skate skirt, and lace up sandals look good together. I'm not asking questions.

That shirt is gorgeous, but I don't know that I would wear them with those pants. But again, somehow she made them look super cute. Sigh.

Easily one of my favorite Kidman looks is this ruffled, light pink gown from the 2002 Oscars. I generally assume it's basically impossible to pull off ruffles after the age of five. But guess what — Kidman can!

She wore this satin suit to the premiere of The Human Stain back in 2003, and I bet she would still wear it today.

This pink L'Wren Scott dress looks gorgeous on Kidman's frame. Even the shrug looks good — there, I said it.

Look at those scales, the long fin-like tail, the glow... she could seriously be a mermaid.

Of course Kidman knows a little black dress is foolproof.