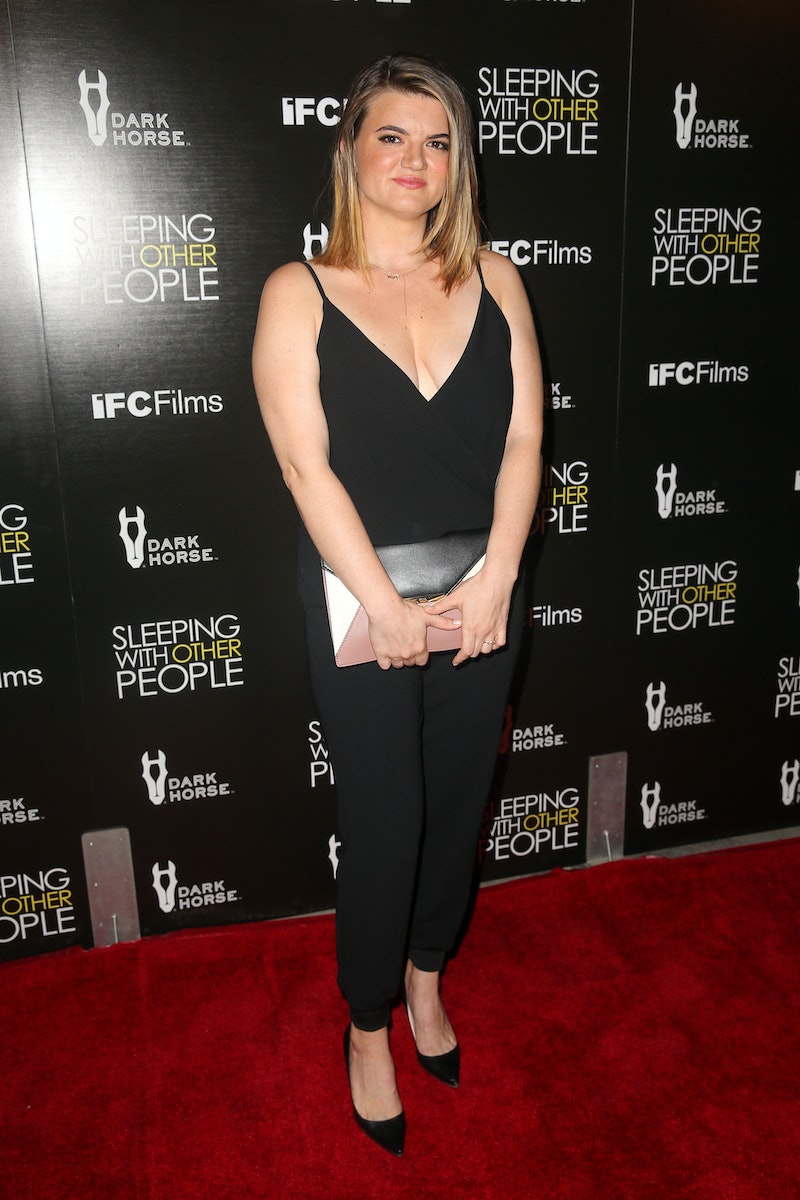 Director Leslye Headland is changing the landscape of the romantic comedy, one movie at a time. Although her latest film, Sleeping With Other People (out now) revisits the age-old question, "Can a man and woman just be friends?" that's the only way it sticks to formula. Still, the When Harry Met Sally comparisons are inevitable — by no coincidence.

"When I was trying to get money to make [Sleeping With Other People], I called it When Harry Met Sally for assholes," Headland tells Bustle, laughing. "Then I was like, 'Oh god. I have to write that movie now."

Headland's intention was to flip that kind of rom-com — sweet, innocent, and far from controversial — on its head, modernizing the subject and adding in her own sardonic tone. And while the director doesn't deny that while Sleeping With Other People is an homage to those types of films, she doesn't think the main question is whether or not Lainey (Alison Brie) and Jake (Jason Sudeikis) can be friends.

"I think they know they can't be friends," Headland says. "For Billy Crystal and Meg Ryan, it really felt like they were asking themselves a philosophical question. I think this film is a little more about people and who know that they're lonely and are desperate for someone else to witness that."

While people may be intent on putting People and When Harry Met Sally in the same boat, it's another movie that really inspired Headland: Billy Wilder's 1960 Academy Award-nominated The Apartment.

"The Apartment is about a woman who is having an affair with a married man and how she falls in love with the guy that she is in a platonic relationship with," she says. "It [SwOP] actually blatantly steals a lot more from The Apartment."

It's no surprise that two of the movies that inspired Headland most both feature complex, strong female characters; the director is known for making films with women who are real and recognizable, far from tired stereotypes. It hasn't always gone over well, as Headland learned in 2012, when she made her directorial debut with the female friendship dramedy Bachelorette. The movie came out around the same time as Bridesmaids and because of that, people were expecting something very similar. Instead, they got a creation that polarized the masses because the women were loud, selfish, and very, very flawed — in other words, not exactly the the tropes seen in conventional rom-coms. Yet the controversy over Bachelorette didn't stop Headland from continuing to portray women in less-"Hollywood" lights, as she did the same thing with Sleeping with Other People. In the film, Lainey sleeps with a married man, messes up constantly, and is far more complex than your typical "other woman."

"When we were shopping the film around no studio wanted to take it because they were like, 'No one is going to relate with this woman. She's sleeping with a guy who's engaged,'" Headland says. "I think the way she differs is that other female archetypes like that don't exist."

Yet now that the movie is out, critics have showered praise upon the film and its depiction of women, skewering the idea that Lainey's flaws make her unrelatable. Headland's even heard reactions from women who've said, "Thank you so much! I was having a horrible affair with a married guy." To which the director responds, "Yeah, I know."

Essentially, Headland created a character that audiences don't seen too often: an "other woman" who isn't a crazy homewrecker, or simply someone with no point of view (the director points to Fatal Attraction as a prime example of the latter —"What if you watched that movie and instead of saying, 'Oh, she's so f*cking crazy!' you actually saw it from her perspective?" she asks). Unlike other rom-coms or movies about "bad" women, Headland made sure that People's female lead was just as developed a character as her male counterparts. She didn't want her to be what she calls the typical "heroine of chick flicks."

"I think for the past 10 years, rom-coms been skewing pretty male, honestly," she says. "There's a sort of divide between the genders. Women in rom-coms are usually girls that don't have any flaws or problems — they just haven't found the right guy or they're sidelined in a male-centric romantic comedy. They're not really part of the romance. They're just sort of there."

Thankfully, Leslye Headland is set on — and succeeding at — changing the game for women in film.

More like this
Yes, That's Lindsay Lohan's Sister Singing In The 'Falling For Christmas' Movie
By Radhika Menon
Keke Palmer Paid Tribute To "Other Half" Darius Daulton After Announcing Pregnancy
By Jake Viswanath
'The Holiday' Director Just Addressed *Those* Sequel Rumours
By Sam Ramsden
5 Biggest Takeaways From Channel 4's 'Untold: Life After Love Island'
By Sophie McEvoy
Get Even More From Bustle — Sign Up For The Newsletter