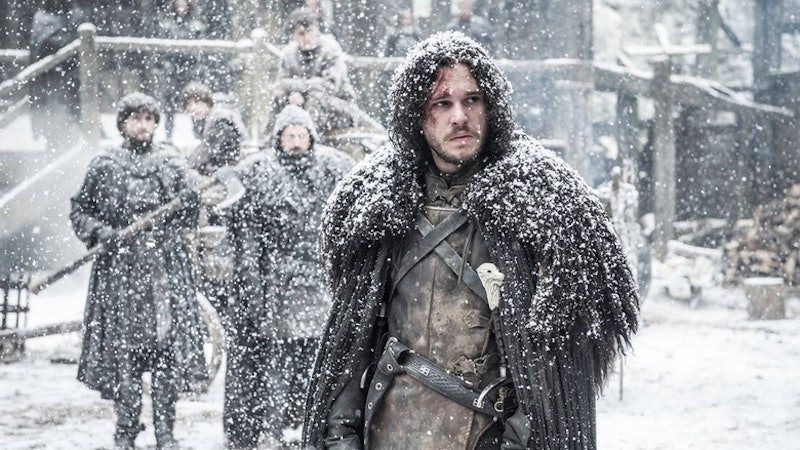 You woke up on Monday morning, feeling good for just a brief moment — then, the realization of what happened Sunday night sunk in and everything was terrible again. Sound familiar? It should, because that's the life all Game Of Thrones fans are living after Sunday's Season 5 finale twist that saw (SPOILER ALERT) the death of our dear, glorious hair model Jon Snow. After being stabbed a total of six times by his own men of the Night's Watch and left bleeding out on the snow, Jon seems most sincerely dead. Jon Snow knows nothing, and we know nothing, and I don't even know how I will survive Season 6 without him. But — could it be that Jon isn't actually dead? Or, even more OMG-worthy... could it be that our favorite brooder of good heart will be resurrected in some form during the coming seasons?

It's certainly possible. There are plenty of sound theories predicting the resurrection of Jon Snow, or what I like to call Jon Snow 2: Electric Boogaloo. The most believable, in this writer's personal opinion, is that Jon Snow is not cold but super-hot; aka, the possibility he could the blood of the dragon, and he will be born again from the fire (R + L = J). It sounds like a sound theory, and it seems to be the most famous of the theories — if you're not familiar, you can check out Bustle's very own Kelsea Stahler explaining it in a quick catch-up session:

And then... well, there are plenty of crazy theories that can only be described in one word: "bananas." I mean, it's understandable: sometimes the only reaction to insanity is with their own insanity. So, to bring us all some comfort and fun in this very dire, very sad time, I've gathered a few of the most "bananas" theories about how Jon Snow could return in Season 6...despite looking super-dead in the Season 5 finale.

First, a few theories that are actually good, courtesy of Bustle's own Kelsea Stahler once again:

And now...the cray cray ones:

Jon Snow Wargs Into His Direwolf

Everyone knows Jon Snow and his Wolf are BFFs for life, and in this theory, maybe the two could even become one. In the Game Of Thrones universe, warging — also known as "skinchanging" — is the ability to move your spirit to a different body, human or animal, and control their minds and actions. We've seen Bran do it, and readers "believe that all the Starks are wargs, even if they haven’t tapped into their powers yet. This means that Jon may have the ability to warg into his direwolf, Ghost, and therefore technically survive an attack on his body." His very handsome, seemingly very dead body. So, might Jon Snow might be hanging around as Ghost for a minute... before he finds a different body to inhabit?

I mean, as far as crazy theories go, this one is more crazy-but-still-believable as opposed to too-crazy-to-even-fathom. It's worth noting that when Jon Snow is similarly stabbed (four times instead of six) at the end of George R. R. Martin's novel, A Dance With Dragons, his last words are "Ghost." Though this did not happen on-screen, in the context of the books it might have been a call for his faithful direwolf to come to his aid — so maybe the show will follow suit? We also saw Ghost come back with a vengeance during Season 5, rushing to Samwell Tarley's aid. It's crazy, yes... but so crazy it just might work? Eh?

Bran And The Bloodraven

Don't you miss Bran amongst all this mess and darkness? He was nowhere to be found during Season 5 of Game of Thrones (which at this point I'm OK with, because there were so many other crazy storylines that had to be contended with this past season) — so that likely mean that Bran will come into play in a big way in Season 6. But, how will that happen? One theory centers largely around Jon: Namely, some viewers seem to believe that Bran and the Bloodraven could bring Jon Snow back.

Why is this so crazy? Because we have seen very little so far of who the Bloodraven is. The Bloodraven is also known as the Three-Eyed Raven that appears to Bran Stark in his dreams, and who Jojen and Meera help him seek. The Bloodraven was once Lord Brynden Rivers, the Bastard Son of Aegon IV Targaryen and Melissa Blackwood. He's a lot like Jon Snow: first a bastard, then the Lord Commander of the Night's Watch (!), and his "personal arms were a white dragon with red eyes breathing red flame on a black field." Just like another animal friend we've met before: Jon's direwolf, Ghost. The theory goes that the Bloodraven orchestrated Jon Snow's rise to Lord Commander and his subsequent death, because he has plans to bring him back from the dead.

And while the similarities are numerous and striking: how the hell is this going to tie in with Jon Snow? We haven't seen Bran in an entire season, so Bran has yet to learn how to up his warg game from the Bloodraven before he can help him carry out any sort of master plan. We don't have that kind of time! There are only ten episodes in the seasons!

It would be quite the disappointment if that weird, icy-cold tension between the Night's King and Jon Snow amounted to a whole lot of nothing. But, maybe that little "come at me" shrug (see: the above GIF) wasn't so much a threat, but an invitation to Jon Snow to just literally chill and accept his fate: that the Starks are somehow related to the White Walkers. That's right, y'all: there are some out there that believe Jon Snow as undead Jon, or UnJon, will become some semblance of the Night's King — or, at least, team up with him, because the Starks are magical and much like the Targaryens are fire, they are ice ... people? "Winter is coming" are the Stark words after all.

It wouldn't be totally insane that Jon Snow would come back as a White Walker, but to propose that he would be the leader of the White Walkers makes me grumpy, because he spent so much time and effort valiantly battling them. However! We gotta keep a cool head and remember that the White Walkers are not necessarily Evil, just the enemies of Man.

Lady Stoneheart And The Kiss Of Life

Remember Lady Stoneheart? Trick question, because she never showed up in the television series. In Martin's A Song Of Ice And Fire book series, Lady Stoneheart is Catelyn Stark risen from the dead. As IB Times explains: "Bent on revenge, she kills any person who has ties to the Freys, Boltons or Lannisters. The character barely talks due to the wounds she sustained before she died." Sounds INCREDIBLE — although everyone involved with Game Of Thrones denies Lady Stoneheart will make an appearance.

The theory: that undead Catelyn Stark is the "mother" from the season finale title, "Mother's Mercy." Could she possibly come back and sacrifice herself to save Jon, delivering to him the Kiss of Life? Y'know, even though she's already dead. This one is appealing, because who doesn't want to see badass Catelyn Stark back with her own kill list — but, because it's been denied a billion times, it's probably not going to happen. It's also super insane, because Catelyn was never super warm towards Jon in life — why would she be in death?

The Red Woman And The Lord Of Light

In this theory, the Red Woman, Melisandre — who abandoned Stannis after ALL OF THAT NONSENSE WE WILL NOT SPEAK OF — is said to bring Jon Snow back from the dead. She's seen it done before, particularly in the Game Of Thrones books... but it's pretty bananas, because what would Melisandre even want with Jon Snow? Tips on hair care? (OK, that part is pretty believable.)

Who knows? Certainly not me, and probably not Jon Snow since he knows nothing — but certainly the craziest fate for Jon Snow would be that he's just dead, killed by the very men that he was trying to save. What a horribly cold way to go.

PLEASE DON'T ACTUALLY DO THIS, SHOW. My heart can't take it. Save Jon Snow '16!