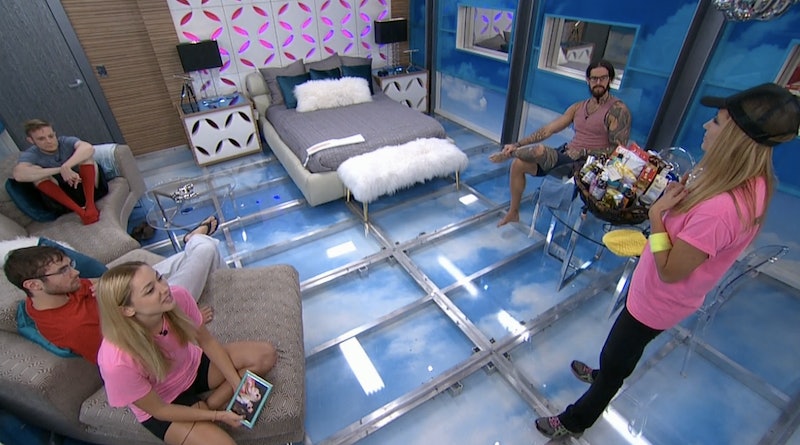 The Big Brother 17 schedule changes in the last two weeks of the game reminded fans that there was still an extra houseguest who needed to be evicted in order to start the finale with three players. We were wondering how they would make that happen, and Julie Chen announced on last Thursday's episode that Tuesday would be a special eviction, with a second eviction on Wednesday's show. (There will be no episode on Thursday because of football.) When you combine that with the fact that the live feeds went down for 36 hours starting Monday, some fans are wondering how the two evictions this week will play out. Is Tuesday's episode a live eviction? Nope, it'll be taped. Wednesday, however, will be a live eviction episode, similar to what we normally get on Thursdays.

Based on what Julie told us after last week's eviction, we don't know for sure if we should expect a week's worth of Big Brother to be happening in the house right now over just a couple of days. Although she mentioned the POV and eviction leading up to the final four, she didn't indicate what Wednesday's episode would feature anything other than a live eviction. Still, it seems odd to skip the POV without any warning to the fans.

Here's what we can expect to see from each episode.

Although we already know that Johnny Mac won the POV competition over the weekend and that Vanessa chose Austin as the replacement nominee, this won't air until Tuesday night.

By this point, the eviction ceremony leading into the final four has already happened. Some fans expect that CBS will leak a few minutes of the live feeds to let us know who was evicted and/or who won the next HOH as they have in the past, but that has yet to happen. We'll find out Tuesday night whether Steve or Austin was the next houseguest sent to the Jury House.

Because we just saw an endurance competition last week and will see one again during the three-part final HOH competition, it's unlikely that the next HOH comp will be endurance. That means we'll probably see the final four HOH competition play out in full on Tuesday's episode. As a reminder, the winner of this HOH is guaranteed a spot in the final three, because he or she can't be evicted this week, so it's a very important comp.

It is almost a guarantee that by the time the live feeds return on Tuesday at 9 p.m. PT, the POV competition will have already been played. Unfortunately, we may have to wait until Wednesday's episode to find out who won this super important POV.

In the final four, the POV winner casts the only vote for eviction, making it a short ceremony. Wednesday's episode will likely end with the last live eviction of the season before finale night. At that point, we'll know who is in the final three this year.

Now that I know how this week's episodes will go, I'm actually more excited about so much Big Brother crammed into such a small window of time!