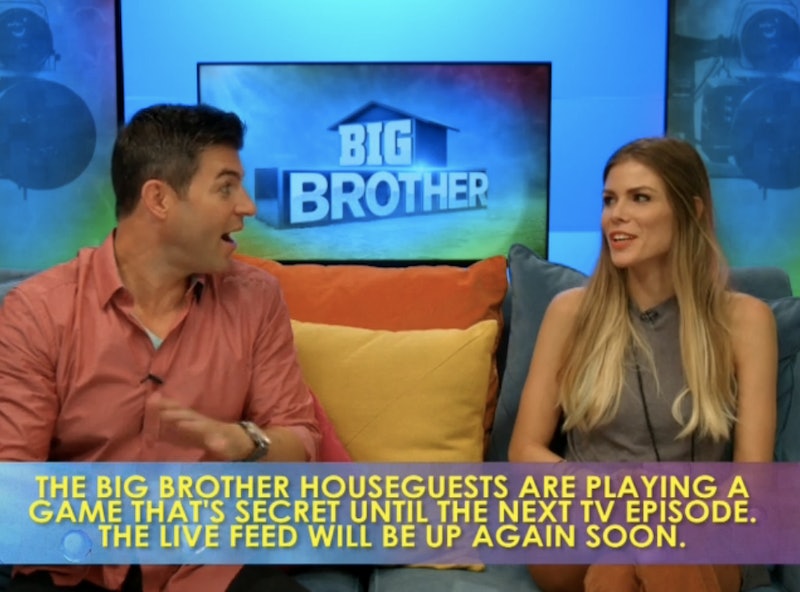 This Monday at 9 a.m. PT, the Big Brother live feeds went down. Normally, the live feeds come down every time there's a competition or ceremony in the house, and on days when there's an eviction, they are often down for several hours, coming back at some point later that night. But due to this week's schedule changes, Tuesday night is a special taped eviction episode, while Wednesday will show a live eviction, and the feeds are down so as to avoid spoilers about who gets evicted first and who wins the next HoH. Unlike the usual break from the feeds, this one was scheduled to last 36 hours, meaning that the Big Brother live feeds come back Tuesday at 9 p.m. PT, after the episode has aired on the West Coast.

With the live feeds gone for so long, BB fans are thirsty for any information they can get about what's going on inside the house. Last year, there was a brief moment when the live feeds came back to let the houseguests know who was evicted from the final five and which houseguest was the next HOH, and everyone is glued to their feeds to see if that happens again. In case we don't get that lucky, here's what I hope is going on in the BB house while the feeds are down.

With John winning this week's POV and taking himself off the block, Vanessa chose Austin as her replacement nominee. With Liz a clear vote for Austin and John a clear vote for Steve, Vanessa would need to cast a tie-breaking vote. One of the last major game moments we saw while the live feeds were still active was Vanessa and John agreeing to evict Austin and keep Steve. I am crossing my fingers Vanessa stuck with that plan!

It's no secret that I am #TeamSteve until the very end, and he needs to win this HoH. It guarantees you a spot in the final three on finale night, and Steve needs to win this competition. Vanessa can't compete in the final four HoH since she won it last week, and John has yet to win one, so Liz seems like Steve's only competition here. If it's anything related to the actual game, then this is his comp to lose.

Nominations don't matter at this point because whoever wins the POV essentially decides who the two nominees are. That said, I'd love to see Steve win so he has another notch on his belt and can make a stronger case come finale night.

With the live eviction happening on Wednesday, the live feeds will likely return shortly after Tuesday's POV competition or perhaps even the Veto Meeting. That's as far as we'll get until we find out Wednesday night who's in the final three.