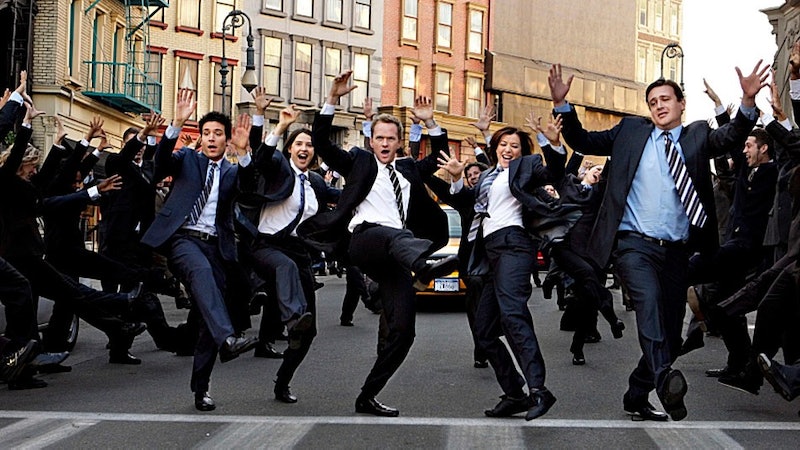 Besides the recurring jokes, doppelgängers, and all of Barney's high fives, the amount of amazing guest stars is easily one of the best parts of How I Met Your Mother . In the course of nine seasons, we witnessed countless celebs take on other roles and make an already great show even greater. Believe it or not, HIMYM aired 10 years ago today on Sept. 19, 2005. It's a decade old, but still just as relevant. Seriously, I binge-watched the entire series on Netflix a few months ago and I couldn't stop watching.

In honor of the beloved show's anniversary, I've decided to round up the most legen—wait for it—dary guest stars. Because as much as I will always have a special place in my heart for Ted Mosby, Lily Aldridge, Marshall Erickson, Barney Stinson, and Robin Scherbatsky, HIMYM would have been super boring without these wonderful cameos.

You may even be surprised to see some of the names on this list. Not one, but two Pretty Little Liars ladies made appearances, along with multiple former game show hosts. Let's not forget about those pop singers either!

OK, OK — I'll stop stalling as much as Ted when he tries to tell a story. Here are the 35 most memorable How I Met Your Mother cameos, ranked in order of greatness.*

Everybody's favorite former Girls Next Door star appeared in the episode where Marshall was too embarrassed to poop at work.

The Hills couple appeared on another magazine cover in the same episode referenced above. Gotta love reality stars!

I *could* have lumped Speidi as one pair on this list, but I just wanted to include this extra shot of Marshall's face as he carried their magazine cover. Priceless.

To real New Yorkers, seeing Maury does't count as a celeb sighting. He's EVERYWHERE... or at least in this episode.

The Jeopardy star plays the host of the made-up game show Million Dollar Heads or Tails. He also appears in Robin Sparkles' "Underneath the Tunes" special.

Alan Thicke is Robin's Canadian companion. He starred in one of her music videos and hosted her TV series, Space Teens.

Judy Greer plays Royce, who goes on a movie date with Ted. They wind up seeing The Wedding Bride, aka the film about Stella leaving Ted at the altar. Royce finds it hilarious, not knowing it's based on real life events.

Ted Mosby claims he gave Weird Al the idea for the song "Like A Surgeon." Naturally no one believes him, but this cameo reveals he really did steal young Ted's idea.

When Barney loses his confidence, even a trip to a Victoria's Secret party can't regain it back. At least it gave us this Heidi Klum cameo though.

Growing up, Barney believed The Price Is Right host was his dad. That's why it's a dream come true when Barney finally gets to appear on the show. (Sadly we all know they're not actually related, but isn't it fun to pretend?)

The former American Idol star gets bonus points for having a pet pig. But she definitely loses some points for stringing Ted along.

Marshall says the magic words: "Ladies and gentleman, Boyz II Men." Then the boy band appears in the woods and sings "You Just Got Slapped." Classic!

While some people may argue the Once Upon A Time actress deserves a more prominent spot on the list, Zoey was just too manipulative to be likable. #SorryNotSorry

Katy Perry plays Zoey's cousin, who she sets up with Ted. She's incredibly gullible and no one knows her actual name. Her naiveté causes everyone to repeatedly say, "Oh, honey."

The Orange is the New Black actress plays Ted's crazy ex-girlfriend from college, Karen. Despite being repeatedly cheated on, he always goes back to her. It's never a good idea.

Enrique plays Robin's rebound, Gael, whose name no one can properly pronounce. He's a masseuse that plays the guitar, which obviously makes Ted super jealous.

The actor from Harold & Kumar Go To White Castle and House plays Robin's psychiatrist, who she falls for. The two even get engaged, but unfortunately that doesn't last.

Wayne Brady plays James Stinson — Barney's gay half-brother. When they team up, he and Barney are the best wingmen for each other. Together they're unstoppable!

On Marshall's quest to re-discover the best hamburger in the entire city, Regis Philbin makes a cameo. He, too, is a fan of the beloved burger.

When trying to "win" his break-up with Robin, Ted begins dating a tattooed, rebellious Mandy Moore. She's the reason he gets that infamous butterfly tramp stamp. Thank goodness for that!

J. Lo plays Anita, the one woman to say "no" to Barney Stinson. It drives him so crazy that he winds up diving into the Hudson River.

Joey Gladstone, I mean David Coulier, makes a cameo in the behind-the-music special about Robin Sparkles. He jokes about how everyone suspects love songs are about him — clearly a reference to Alanis Morissette's "You Oughta Know." Touché, HIMYM.

Van Der Beek plays Simon, the first boyfriend of Robin Sparkles. According to Robin, he had an extensive collection of Hard Rock Cafe t-shirts. Such a dreamboat!

As quite possibly HIMYM's most polarizing character, SNL's Taran Kilam is Gary Blauman. Everyone has a different opinion — either he ruined their lives or made them better. Oh, and fun fact: He's the real-life husband of Robin (aka Cobie Smulders).

Kim K. quotes Shakespeare and Marshall refers to her as the "super hot lady, who my wife keeps telling me why she's famous but I keep forgetting." LOL.

Also, can we take a moment to appreciate the magazine is called Them Weekly, clearly a reference to Us Weekly? So clever.

Ashley Benson plays Carly, the 20-year-old that dates Ted, thinking he's much older than he is. She treats him like a grandpa. It's all fun and games until Ted realizes that Carly is actually Barney's half-sister... Yikes!

This former Pussycat Doll is Robin Sparkles' best friend — Jessica Glitter. The two are reunited thanks to Lily's help.

They sing about how "two beavers are better than one" in their innuendo-filled Canadian TV show, Space Teens. We also get an encore of the song at the end of the episode.

Rachel Bilson plays the Mother's roommate, Cindy. She's a student at the college where Ted teaches. The two briefly date before he realizes that everything he likes about Cindy actually belongs to her roommate.

Former Roseanne star Sarah Chalke plays Stella. Her and Ted's two-minute date is one of the most memorable parts of the show... Too bad she later leaves Ted at the altar for her ex-boyfriend Tony. (Personally, I'm still upset about that.)

The beloved Breaking Bad actor plays Ted's terrible boss, Hammond Druthers. They work together at an architectural firm, but he doesn't respect Ted's work and only asks him to make model trees.

Tim Gunn plays Barney's personal tailor. He gives just as great fashion wisdom as he does on Project Runway. He also participates in the poker game before Barney's wedding.

In quite a different role from her Pretty Little Liars character, Lucy Hale plays Robin's younger sister, Katie. She visits New York for the first time and surprises her sister with how grown-up she is — or tries to be.

Katie reappears in the last season as Robin preps for her wedding. They wear jerseys and play hockey in the hotel room. It's as great as you'd expect!

Oops, she did it again! Britney Spears stole the show as Abby — Stella's receptionist, who becomes obsessed with Ted... until she moves onto Barney. Then she goes on a mission to ruin Barney's reputation after he sleeps with her and never calls.

Despite that rough patch, a few episodes later she teams up with Barney to get revenge on Ted. Her character is hilariously awkward and shows a whole new side to the singer.

* This list is totally subjective, based on a variety of factors: the celebrities I was most excited to see, the roles they played on the show, etc. Sure, you may not be 100-percent happy with these rankings, but I'm sure we can all agree on one thing: Britney Spears tops the list. Without a doubt!