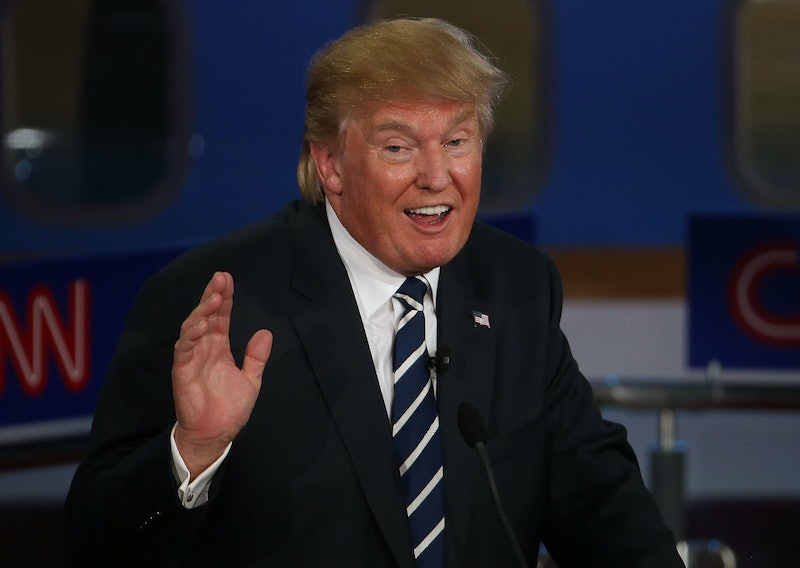 If there's one thing you can say about Donald Trump, it's that he's reliable. America can count on this man ... well, for certain things. We can always rely on him to insult anyone who criticizes him, boast about his wealth, fixate on China, and make horrendously sexist remarks. Sometimes, if you're lucky, you get treated to all of the above in one sitting. Though he was trying to be on his best behavior, and refrained from committing most of his usual offenses, Trump made sexist remarks during the GOP debate. Making unsavory comments about women might be his most unshakable habit, and the second debate has proved it once again. Trump just can't quit misogyny.

The second Republican presidential debate, which aired on CNN on Wednesday night, featured the same lineup of candidates from the first prime-time event, plus the addition of Carly Fiorina, the only female candidate in the GOP field. Fiorina's presence on stage undoubtedly increased the chance that Trump would blurt out something targeting her gender — something he would never throw at, say, Marco Rubio or Ted Cruz. And that's exactly what he did ... sort of.

CNN's moderators took Trump to task for his comments last week on Fiorina's looks, asking her to speak publicly about what The Donald had to say. As a reminder, it was an observation that would make Ted (a teddy bear known for being offensive) say, "Whoa, take it easy!":

Fiorina responded flawlessly and tactfully, reminding Trump, CNN, and everyone watching at home that no, she isn't going to play along in Trump's twisted games. In an attempt to save face, Trump responded: "I think she’s got a beautiful face and I think she’s a beautiful woman.”

Ugh. It was a surprising move for Trump, who's publicly promised never to apologize unless he has ample cause to. But it still echoes The Donald we all know and loathe. Trump's comments had recalled his appalling behavior in the first debate, during which moderator Megyn Kelly confronted him about his past sexist remarks. Instead of apologizing or owning up to them, he mocked Rosie O'Donnell yet again and then essentially threatened Kelly for daring to ask the question. He remained indignant even after the debate, making further comments about Kelly which many construed as blatantly sexist.

While his comments on Kelly were certainly uncalled for, a prickly showdown between Trump and Fiorina on the debate stage was exactly what viewers were expecting. That's because long before the second GOP debate — and even before the first one — Trump and Fiorina were already exchanging swipes at each other. Since July, the two have been making digs at each other at campaign stops, in interviews, and even in campaign ads. Surprisingly, Fiorina took the first swing, calling Trump a "tireless self-promoter" and distancing herself from him at a campaign stop in New Hampshire on July 7. From there, the feud took off, with Trump firing back about Fiorina's stint as CEO at Hewlett-Packard, which he says she "ran into the ground."

But of course, Fiorina isn't the only woman Trump has commented about. In fact, he went as far as to say that as president, he would "take care of women." Right.

It's no surprise that the in-person exchange between Trump and Fiorina was tense, and it's even less of a surprise that Trump's comments were, once again, steeped in sexism. The shining light, however, was Fiorina's above-it-all 'tude. It spoke volumes without saying a word — and here's hoping Trump hated every last word of it.