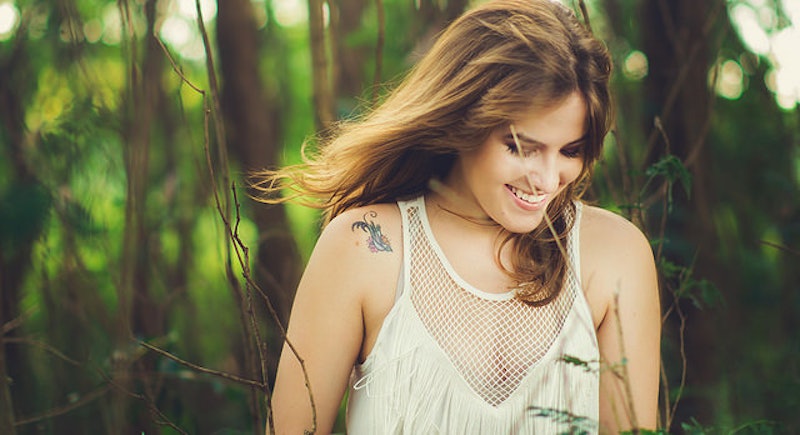 I'm so glad that we're becoming more open about sex as a culture, but there's still a long way to go. There are lots of things that still put people on edge, sexually, and that becomes all the more clear when you're a sex-positive woman. Just like we need to relax about worrying over the number of people we're having sex with, how much sex we're having, the type of sex we're having, and who we're having it with— we also need to stop jumping to assumptions about people who love sex. Especially women who are open about it.

I mean, I love sex. And I talk about it, a lot. My friends have been subject to every type of over-share and unwanted detail you can imagine, and are very tolerant of my mis-timed analingus stories at a fancy dinner or sharing a bit too much about what their friend likes in bed. And they're great. They really are. But people still assume all sorts of weird things when you're open about sex. I'm amazed at the conclusions people jump to, things that have no real foundations in anything I've said, but are some warped extrapolation from me just being honest about how much I love doing it. A lot of them are sexist, almost of all of them are offensive. And I'm over them.

So here are 10 misconceptions about woman who love sex and why you shouldn't hold them:

1. That We've Done It With Literally Everyone

So, I am a big advocate of being totally open and cool with how many people you've had sex with, no matter the number. But I'm still shocked by how many partners people assume I've had. I mean, I'm open about loving sex and trying new things, but I've never expressed an interest in hooking up with loads of people. Still, just being enthusiastic about sex means people often guess that my number of sexual partners is well into the hundreds... really? I mean, I'm not against it, but I don't even have that time.

Or worse, that we're "dirty". This is sort of true across both genders, but even more so when it comes to women. Loving sex is somehow associated with being reckless (because I must be so reckless to want to stop baking a pie and take off my petticoat and have sex, right?) and even unsafe. Just because we love sex doesn't mean we're doing it with a lot of people or that we're not having safe sex.

3. That We Love One-Night Stands

I guess it's the only way I could have had sex with the 10,000 people I assume I've boned. Although I've pretty much never, ever, ever mention one-night stands, and always talk about how great friends with benefits can be, people always assume I'm totally up for one-night stands. If that's your thing, great, but it's not mine just because I like sex. Being a sex-positive woman about how much sex you're having and how many partners you've had. You're doing you, and that's what's important.

4. That We Have Low Self-Esteem

Or Daddy issues. Or something. We couldn't just, you know, like sex because we like sex. Because it feels amazing and is super fun and that we're biologically disposed to think it's like the best thing ever. Right. I mean, it can happen. There are plenty of people who use sex or flirtation to fill a void, and I think most of us have been that person at one time or another. But a lot of people are just happily sex-positive.

5. That We're Not Relationship Material

This is probably the grossest and most sexist of the lot. You know exactly what I'm talking about, men can get away with having lots of sexual partners. But if you're a woman open about liking sex and people think you're having sex with loads of people and they think you're not worth dating, because you're sullied or something It feels awful. It is awful. People are often genuinely surprised when they know I've had serious relationships and that I've always been faithful. It's insulting. Also, wouldn't the best person to be in a relationship with be someone who loves sex? #justsaying

OK— so I kind of am. But that doesn't mean everyone who likes sex is kinky— some people are very passionate about the missionary position!

7. That We Have Questionable Morals

Along with all the people we're having sex with, if you're a woman who loves sex you must be so out of control you don't care about hooking up with people with boyfriends, or wives, or your friend's exes. Or that we constantly cheat on people. It's crap and again, a really insulting assumption.

8. That We're Always Having Sex

So, fair enough I talk about sex like 99 percent of the time. But that doesn't mean I'm always having it. Some women who love sex don't necessarily have high sex drives, they're just really love it when they do have it and are open about that. They do what's best for them. I have a massively high sex drive but still go through dry spells so fierce that my vagina is basically a tumbleweed made of tears. None of this 'girls can always get laid' nonsense.

9. That We're Pretending To Impress People

If we're not doing it for low self-esteem, we're just adopting a "cool chick" person to impress others . Right. I can only guess people who assume this are having really terrible sex and don't realize how awesome it is on its own. There's no need to pretend.

10. That We Have Low Standards

Hey, I love having sex. Good sex. And the starts with the person I'm having it with, cool?

Want more of Bustle's Sex and Relationships coverage? Check out our video on sex positions to make him last longer below: