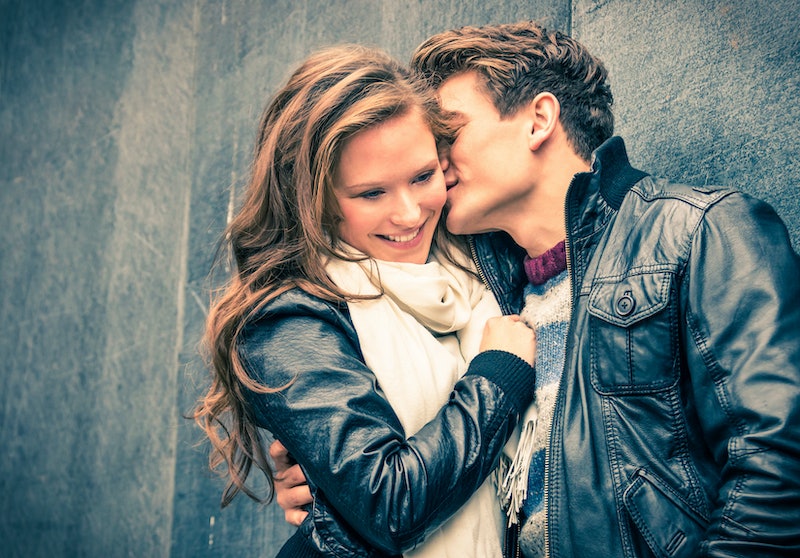 If you're a lady (and if you're reading this, you probably are), chances are you've observed a pattern in the absurd self confidences of men who hit on women loudly and publicly. As it turns out, we aren't the only ones who've noticed this pattern, because researchers recently published a study looking at the relationship between flirting and self-esteem, and the results might surprise you. Sure, there's a vast number of highly confident men who think their smolders will get them into the pants of even the most Elsa-like of ice queens, but people with low self-esteem actually can flirt too, in the right situation.The researchers hypothesized that in situations with high risk of rejection, people with low self-esteem would flirt "indirectly," using body language to convey interest for fear of being refused, whereas people with high self-esteem would flirt directly because they were less worried about being shot down, Refinery 29 reports. They used two studies to test this, with heterosexual participants whose self-esteem levels were evaluated with Rosenberg's Self-Esteem Inventory. The first asked college students to recall and write down a time they were rejected, using a checklist for what kind of behaviors they used and how risky they thought those behaviors were. Behaviors ranged from direct, such as straight up asking someone on a date, to indirect, like waiting for the other person to express interest.

The second study asked participants to make a video in which they answered questions about themselves. They were told that the videos would be seen by someone of the opposite sex who would make a video of their own. Participants were then split into two groups: those who were told they could meet that other person if they wanted (high rejection), and those who were told they would never meet the other viewer. Their tapes were later evaluated by researchers to see how direct the participants were in expressing interest in the other person.

But let's get to the important stuff here: what about how women reacted? Pretty much how you'd expect, actually. No matter their self-esteem, their flirting was more direct when there was a low risk of rejection. Now, I'm not saying we're the smarter gender after all... but I'm not not saying it either.

More like this
What Is The Forest Personality Test? The TikTok Trend, Explained
By Georgina Lawton
The Best Time To Date After A Breakup, According To Experts
By Bustle Editors
The Top Mistakes Scorpios Make In Relationships (& How To Avoid Them)
By Nina Kahn
20 Things You Should Never Tolerate In A Relationship
By Rachel Sanoff and Kathleen Ferraro
Get Even More From Bustle — Sign Up For The Newsletter