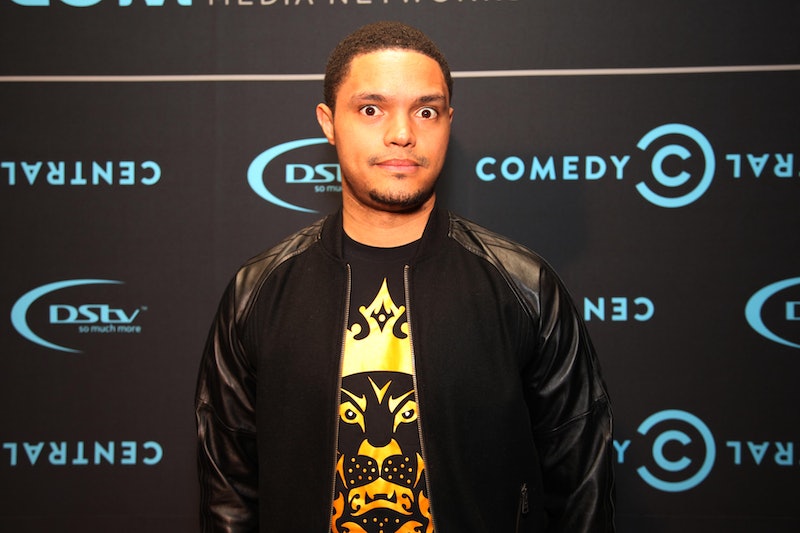 Big news: Stephen Colbert is inviting new Daily Show host Trevor Noah to The Late Show on Thursday night. In Colbert's first two weeks on air, his guests have ranged from the expected actors and comedians like Jake Gyllenhaal and Amy Schumer to the more rare, like Vice President Joe Biden and Chief Justice Stephen Breyer. Noah, however, will be the first talk show host to be interviewed by Colbert the talk show host — and considering Noah is taking over the job that previously belonged to The Colbert Report's Colbert's nemesis/BFF, Jon Stewart, this is gonna be good.

The 28-year old Noah replaces the previously confirmed Naomi Watts as a guest on Thursday's program, which will also feature UN Secretary General Ban Ki-moon and musical guest Chris Stapleton. Noah and Colbert have much in common, but there's only so long they'll have to talk — so what will they choose to chat about?

Noah is about take over one of the most important jobs in late-night — he starts hosting The Daily Show With Trevor Noah on Sept. 28, and he's got big, Stewart-sized shoes to fill. Surely Colbert, one of Comedy Central's biggest star-alumni, will have so words of wisdom for Noah in their panel interview?

Some conversation topics that Colbert and Noah have to choose from:

It's timely, all right. Wednesday night's second Republican debate will surely provide a bevy of fodder for Colbert to mock on Thursday evening, and Noah should start practicing: he's coming into the late night game at a crucial political moment, and America wants to know he has the chops to pick apart debates like this one.

Naturally. Noah could open up about the differences between elections here in the United States and in his home of South Africa — it could be a cute throwback to this new The Daily Show promo that Comedy Central released on Wednesday, featuring the fresh new host going to boot camp with correspondent Jordan Klepfer to learn all the names of the presidential candidates in the race so far. Not so easy, apparently.

The Daily Show With Jon Stewart

If Colbert's interview with Noah just turned into a jovial tet-a-tet where Colbert shares his own personal memories and anecdotes from his time being a correspondent on The Daily Show, well, I'd be just fine with that. Oh yeah, and the cultural and historical impact of the show and the legacy that Stewart left behind, yada yada.

Colbert likes to get sappy about his best bud Stewart — remember that "who's cutting onions in here" send-off Colbert gave him on the last episode of The Daily Show, embedded in a beautiful Lord Of The Rings metaphor? I'm sure the conversation will touch on Colbert's old boss and Noah's predecessor, celebrating him for giving them both huge careers.

Colbert might use the opportunity to talk up Noah and endear him to audiences who are still mourning Stewart's departure. What do we know about Noah? He's young, he's South African, he's a stand-up comedian, and he's got a great accent. But, is he experienced enough to take the helm as host?

Comedy Central has not only been riffing on Noah's culture shock in their promos for The Daily Show, but also his youth and inexperience. His appearance on Colbert could be a good opportunity to convince America he really is the man for the job he's starting next week. Will Colbert be tough on him and bring up those tweets that had people raising eyebrows? Or is his appearance an endorsement?

The Daily Show With Trevor Noah

What exactly does Noah have in store for The Daily Show? Sure, there are already three new correspondents on board, but what other changes are coming for the first new host of the satirical program in seventeen years? Hopefully, there will be some straight-talk and insight into how Noah plans on making The Daily Show his own, unique from Stewart's success. And, surely, Colbert will have advice for Noah on how to handle the Comedy Central atmosphere and being in the spotlight as a host of a fake news program that people have come to depend upon for real news.

No matter how much they have in common, I'm sure that Colbert will find some time to bash Trump with Noah. It's only right.

Don't miss Noah's sit-down with Colbert tomorrow night, ahead of his first night hosting The Daily Show on September 28. The late-night game is back in full-swing!