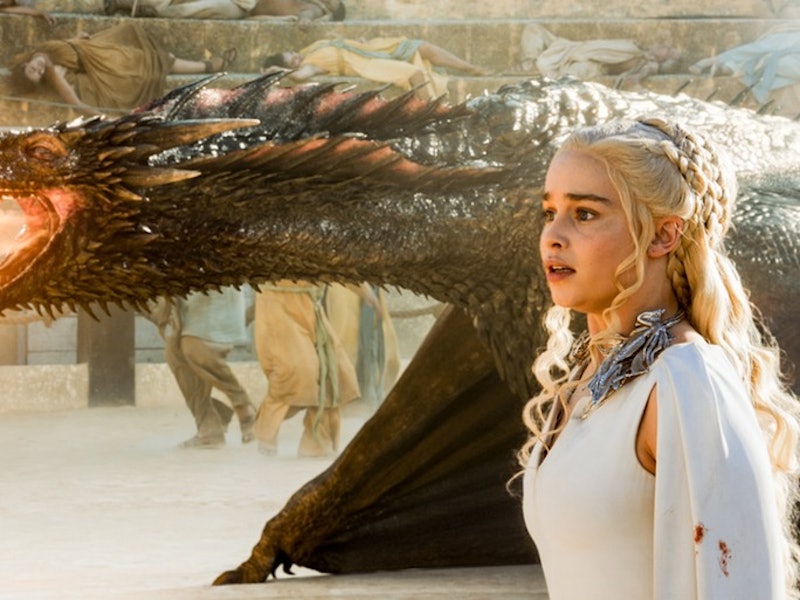 It was a good year to be from Westeros. Well, not really, Season 5 of Game of Thrones featured some of the show's darkest storylines yet, but here in the real world all that drama led the HBO juggernaut to garner 24 Emmy nominations. In an awesome turn of events, the Game of Thrones women earned the lion's share of the love where actor nominations are concerned. Emilia Clarke (Dany) and Lena Headey (Cersei) both nabbed Best Supporting Actress in a Drama nods, but which Game of Thrones actress could win the Emmy?

It's hard to know what goes through the mind of the Emmy voter. These elite few go off screeners of shows, word of mouth, campaigns, and their own TV tastes when casting their votes. The best way to determine an Emmy favorite is to look at the presence of the actors in the past year, their respective storylines, and past Emmy love. Clarke and Headey both had blockbuster seasons on Game of Thrones , and they both play fan favorites (yes, Cersei counts as a fan favorite since she falls in the "love to hate" category as well as having many earnest fans as well), but in the Game of Emmys you either win or you practice your I'm not disappointed face for when the camera lingers on you too long after you lose.

This is Clarke's second Emmy nomination for Game of Thrones. She was last nominated in 2013, so the Emmy voters must have responded to her storyline this season, or at least they responded to what they saw in "The Dance of Dragons," Clarke's submitted episode. In case you need a refresher, "The Dance of Dragons" featured the attempted attack on Dany by the Sons of the Harpy. There was some strong work by Clarke in this episode as Dany prepared to face death and realized Jorah was in the fighting pit, but there was also some not so great CGI that detracted a bit from the power of the fighting pit scene.

As for Clarke, she was very much in the public eye this year thanks not only to Game of Thrones, but also to Terminator Genisys. The summer blockbuster wasn't a hit with critics, but it did raise Clarke's profile as she took on the iconic role of Sarah Conner. She's also still arguably Game of Thrones most familiar face (outside of the ubiquitous Kit Harington as Jon Snow). For these reasons, she can't be completely counted out in the Emmy race.

This is Headey's second consecutive nomination for Best Supporting Actress, and that tells me Emmy voters are consistently being wowed by Headey's performance. Cersei was put through the ringer in Season 5, and nowhere was Headey's work more outstanding or memorable than in her submitted episode, "Mother's Mercy." The season finale saw Cersei shorn from head to toe and forced to take the Walk of Shame back to the Red Keep. Yes, a body double was used for much of the actual walk, but the acting was all Headey. The brutal scene is still being discussed months after it aired, proving Cersei's walk won't soon be forgotten.

Headey didn't have a big summer blockbuster to boost her name recognition this year, but she also didn't need one. Emmy voters didn't give Headey the statuette last year, but she was also up against Breaking Bad's Anna Gunn. The important thing is she is on the radar, and in a major way. When you add in the fact that Headey starred in what might very well have been the most talked about scene of the year, her Emmy game is undeniable.

If a Game of Thrones' actress is going to take home the gold this year, it will without a doubt be Headey. Not only is she already a clear favorite among Emmy voters thanks to back to back nominations, her storyline was dramatic, human, and deeply affecting. Given how often the Academy shies away from fantasy, they are far more likely to bestow an award on Cersei's Walk of Shame than they are on the more fantastical dragon flight Dany went on. Headey's polished performance and willingness to go to the darkest of places in Season 5 make her the clear Emmy favorite.