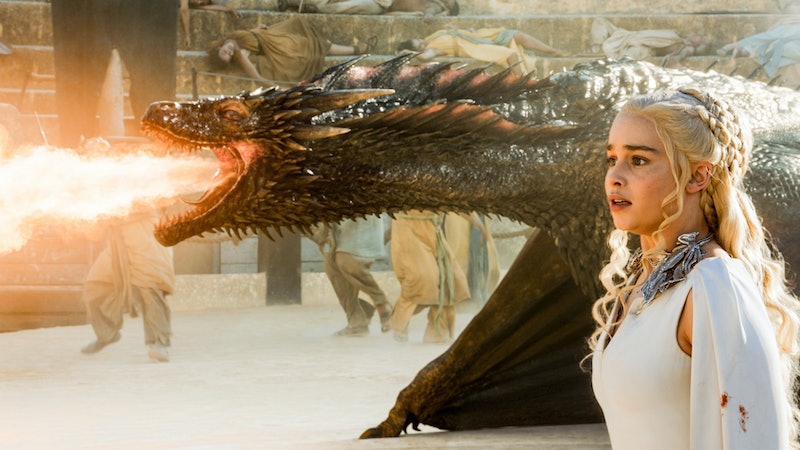 It's not exactly a well-kept secret that HBO's Game Of Thrones is coming off of its most controversial season yet. Not only was Season 5 based on the two weakest entries in George R.R. Martin's A Song Of Ice And Fire Series, but showrunners David Benioff & D. B. Weiss seemed determined to pad out the thin material with even more violence against women than usual. First, Sansa was raped by Ramsay Bolton on their wedding night; then, Shireen Baratheon was burned at the stake by her own father, King Stannis; then, Cersei Lannister was forced to march naked through the streets of King's Landing in a "walk of atonement." And yet, Game Of Thrones racked up the most Emmy nominations out of any show at the 2015 Primetime Emmys. So, the question must be asked: Does Game Of Thrones really deserve its success this year?

The HBO show has defied the Emmy voters' typical aversion to all things fantasy by racking up a respectable number of nominations each year it's been on the air: 13, 11, 16, and 15 nods for each of its previous four seasons, respectively. But this year, that number jumped to a jaw-dropping 24 nominations: by far the highest number this year ( American Horror Story: Freak Show trails behind with 19 nominations for second place) and one of the highest ever, falling just shy of NYPD Blue 's 1994 record of 27 nominations.

So what gives? How could Thrones' most controversial season also be its most lauded by the Emmys? First of all, let's recognize that controversy is not antithetical to success; in fact, they often go hand-in-hand. The online furor raised over events like Sansa's rape or Shireen's death only helped drum up interest in the show. No matter how many times viewers threatened to stop watching, the ratings kept rising. The Season 5 finale, "Mother's Mercy," drew a record-setting 8.11 million viewers, over one million more than last year's finale, "The Children" (with 7.09 million).

And while it's easy to get caught up in a firestorm of angry tweets and enraged think-pieces, it's important to remember that often these emotions are the product of a very vocal minority, and don't necessarily reflect the views of every audience member. Contrary to perception, Season 5 actually seems to be many viewers' favorite season of Thrones yet: IMDb's user ratings for Season 5 are exactly tied with Season 4 at an average of 8.72. Yes, the season contains the show's lowest-rated episode to date, "Unbowed, Unbent, Unbroken" (which featured Sansa's ill-fated wedding night), but it also contains the highest: "Hardhome," the epic hour featuring Jon Snow's battle against the White Walkers.

(It is odd to note that, while Thrones was nominated twice for Outstanding Directing — including one for David Nutter's direction of the Season 5 finale — the other nod went to Jeremy Podeswa for the derided "Unbowed, Unbent, Unbroken" over Miguel Sapochnik for the superb "Hardhome.")

But the subjective quality of the season aside, Thrones is objectively one of the most — if not the most — ambitious show on television, now or ever. With over two dozen main cast members, simultaneous shoots in six countries, and a budget of approximately $6 million per episode, there has literally been nothing else like it in the history of the small screen. Even its arguably weakest season is still miles beyond what most other shows are even attempting.

It makes sense that 16 of its 24 nominations come from the Creative categories — including casting, costumes, editing, hairstyling, makeup, production design, stunt coordination, and visual effects. The Thrones team received four separate nominations in the Cinematography category alone (for "Sons Of The Harpy," "Unbowed, Unbent, Unbroken," "Hardhome," and "The Dance Of Dragons.") The only other shows that managed to sneak into that category with Thrones were Boardwalk Empire, The Good Wife, and House Of Cards.

It's tricky when discussing whether a show quote-unquote "deserves" its recognition, since we're talking about a voting body of human beings with opinions as personal and biased as all of ours. Will Thrones finally win the award for Outstanding Drama Series this year? Probably not. But, did it earn its 24 nominations this year? In my oh-so-very humble opinion, the answer is: yes, absolutely.

Now, if only they'd given poor Kit Harington a nod, I could die happy...

More like this
How Lady Gaga & Adele Are Closer To The EGOT All Of A Sudden
By Jake Viswanath
Gwendoline Christie’s Partner Is Part Of Royal Family History
By Parry Ernsberger and Sophie McEvoy
Does 'Locke & Key’s Ending Mean There Could Be A Season 4?
By Sophia Moore
Everything To Know About 'Evil' Season 4
By Meguire Hennes
Get Even More From Bustle — Sign Up For The Newsletter