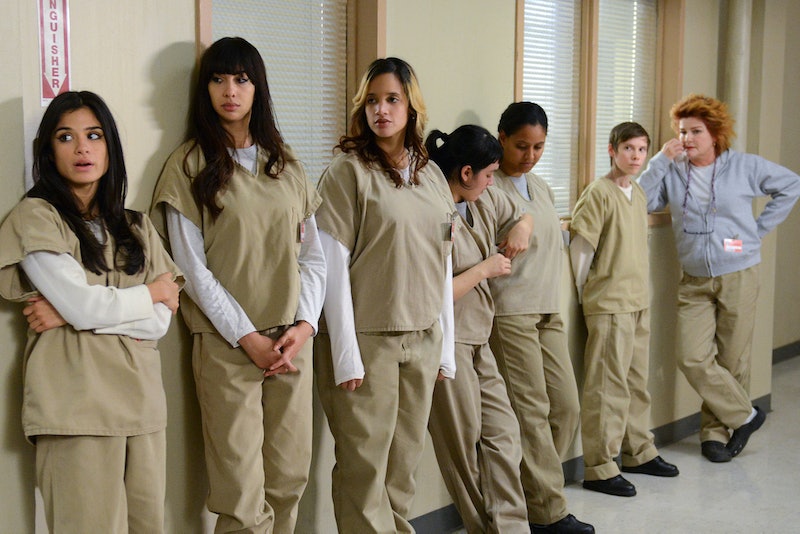 If there's one series that truly set the standards for online streaming, it's Netflix's Orange Is The New Black. The prison-set series follows the admittedly WASP-y Piper into the Litchfield Penitentiary, where she is serving time for a drug charge. Though the series is set in a prison, Oz it is not: though the series has plenty of dark elements, it's often lauded for its more comedic moments, many of which are brought to us by Uzo Aduba, who took home an Emmy for her role of "Crazy Eyes" in 2014. The highly talked about Orange Is The New Black has been an Emmys darling since it first began streaming on Netflix, but what category it's once again nominated in may shock you. Orange Is The New Black is up for the Outstanding Drama Series Emmy and not Outstanding Comedy — and, surprisingly, the amount of laughs in includes has nothing to do with why it's considered a drama.

It's not at all crazy that Orange Is The New Black scored yet another Emmy nod. As reported by Tech Crunch, Orange Is The New Black is Netflix's most-watched series — and though it only has three seasons under its belt, it has garnered plenty of well-deserved awards and nominations. In 2014, the show dominated the Emmys when it won the whopping seven out of 10 Emmys it was nominated for — not an easy feat for a show that had just aired its second season. This year it's up for four more Emmys, including the big one for an Outstanding Drama Series — a category placement that may make you make this confused face:

The reason for Orange Is The New Black's category actually has a lot more to do with run time then it does with the content of the show itself. According to the official Emmys rules:

Each episode of the Netflix series clocks in at roughly an hour, which is the standard time for television dramas. (When a show is broadcast on television, it typically runs at roughly 45 minutes, in order to account for commercials.) Though Orange Is The New Black is more of a "dramedy" than a straight-up drama, its longer run time allows it to rub elbows with nominated drama series like Mad Men and Better Call Saul as opposed to comedies like Unbreakable Kimmy Schmidt and Modern Family.

At the end of the day, Orange Is The New Black's hybrid nature means that it needs something to identify with in order to fit into a specific category. Though the deciding factor is ultimately running time over content, hey — any category that gives this show a nod is OK in my book.