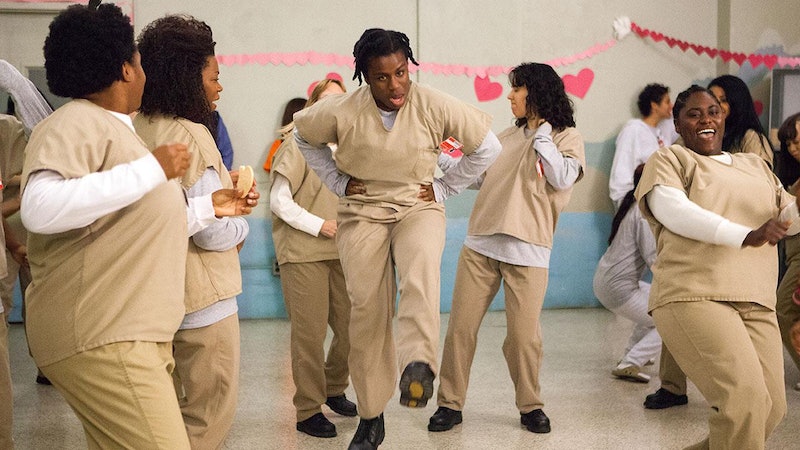 Like most awards shows, the 2015 Emmys are already proving to be a pretty mixed bag. While many of the nominations are cause for celebration (Tatiana! Kyle! Kimmy Schmidt!), the absence of deserving names like Gina Rodriguez and Terrence Howard from the list is a major disappointment. Yet while seeing those snubs certainly bums me out, I am pretty happy with how this year's Emmys are turning out — especially when it comes to the number of female-driven shows nominated for Outstanding Series.

Because compared to the line-up from last year's Emmys, it's a huge improvement. In 2014, 12 series received nominations for Outstanding Comedy and Outstanding Drama. In the Drama category, there was Breaking Bad, Downton Abbey, Game of Thrones, House of Cards, Mad Men, and True Detective. Of these, four — Breaking Bad, HoC, Mad Men and True Detective — were definitively male-driven. One, Game of Thrones, featured both male and female protagonists, and one, Downton Abbey, was predominantly female-driven.

On the Comedy end, Modern Family, Louie, Orange is the New Black, Silicon Valley, The Big Bang Theory and Veep scored nominations. Three of these — Louie, Silicon, and Big Bang — had male leads, two — OITNB and Veep — starred women, and one — Modern Family — was led by both male and female actors.

So overall, in 2014, seven of the 12 series nominations were male-driven, three were female, and two were mixed. Not a horrible ratio, perhaps, but certainly not great. Without question, there was room for improvement, although I for one doubted that things would actually change any significant amount. Despite the recent fights for representation on-screen, the TV landscape still felt far too male-heavy.

Then 2015 happened. This year, 14 shows instead of the usual 12 got nominated for Outstanding Series, and while some of the new Emmy rules have been cause for complaint, this particular one seems to have elicited total success. Of the seven dramas nominated — Better Call Saul, Downton Abbey, Game of Thrones, Homeland, House of Cards, Mad Men, and Orange is The New Black, three — Saul, Mad Men, and House of Cards — are male-driven, one — Game of Thrones — is mixed (although you could argue that this past season was far more female-heavy, if not always for the right reasons), and three — Downton Abbey, OITNB (which is run by a woman), and Homeland — star women. Already, that's a better ratio than last year.

And in Comedy, Modern Family, Louie, Silicon Valley, Parks and Recreation, Transparent, Unbreakable Kimmy Schmidt and Veep were honored, marking the most significant change yet. Of these, only two have male leads: Louie and Silicon Valley. One, Modern Family, is mixed, and the other four (two of which, Kimmy and Transparent , are female-run) all star women. Five out of seven shows putting ladies front and center? Pretty damn cool.

In total, 2015 offered 14 Best Series nominees, half of which are female-driven series, with two more featuring women alongside men lead roles. That's an incredible number, and it marks a serious change from last year's disappointing line-up. When you add in the shows nominated in other, non-Series nominated categories, the ratio gets even better; the shows with the most nominations this year include American Horror Story: Freak Show, Bessie, Olive Kitteridge, and Inside Amy Schumer. Plus, there's the fact that many of the female acting nominees are over 40 (Viola Davis, Robin Wright, Lily Tomlin ...), and are being honored for playing complicated, flawed women on shows worthy of their talents. This year's Emmys did very right by its female nominees.

Of course, there are always things that could be improved. Half is certainly nice, but I'm waiting for the year that the majority, if not all, of the Best Series nominees are female-led shows. Still, the 2015 crop of nominations are not to be overlooked. When shows by, and starring, women get the recognition they deserve, it's always cause for some serious celebration.

More like this
Adele’s All-Female Lineup Includes Kacey Musgraves, Mahalia, & Self Esteem
By Shahed Ezaydi
James Marsden Kept Teddy’s Westworld Season 4 Return A Secret “For Years”
By Brad Witter
Don't Expect To See Your Fave Modern Royals Depicted On 'The Crown' Season 6
By Jack Irvin
At 14, Kate Berlant Had A Wheelie Backpack & One Line In 'Lizzie McGuire'
By Samantha Rollins
Get Even More From Bustle — Sign Up For The Newsletter