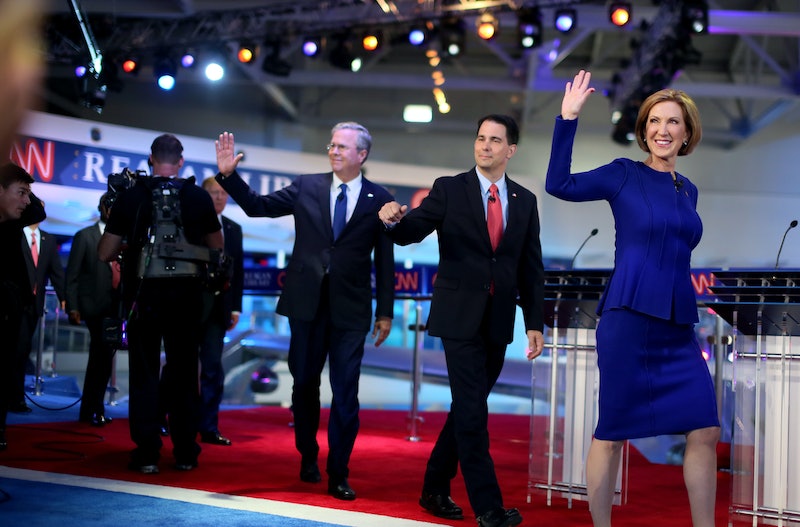 After Donald Trump insulted Carly Fiorina's looks in a Rolling Stone article published last week, continuing his gross habit of making derogatory comments about women, it seemed inevitable that the two Republican candidates for president would have a fierce face-off in Wednesday night's second GOP debate. When Trump tried to placate Fiorina by calling her "beautiful," Hillary Clinton summed up the candidate's misogyny problem in a single, perfect tweet.

In the Rolling Stone article, Trump said of 61-year-old Fiorina:

Host Jake Tapper asked Fiorina to respond to Trump's comments on her looks and his subsequent backpedaling where he claimed he was talking about her persona. She majorly took the high road for the second time of the night, simply saying "I think women all over this country heard very clearly what Mr. Trump said." This was met with wild applause, which quieted awkwardly when Trump responded with "I think she's got a beautiful face and I think she's a beautiful woman."

As Hillary makes clear, the fact that Trump thought that he would win Fiorina's favor and the favor of female voters by making yet another comment on her looks, however complimentary, is a clear demonstration of his reductive and misogynistic views towards women. Mr. Trump, let us all make something clear to you: You do not win over women voters by telling Carly Fiorina that she's pretty. You win over women voters by acknowledging that women are not defined by their looks, that their looks have nothing to do with their ability to govern, and that it's absolutely inappropriate and disrespectful for you to inject your personal opinions on women's appearances (or anyone's appearances, for that matter) into a discussion that's supposed to be about policy and merit. It's not a good look on you.