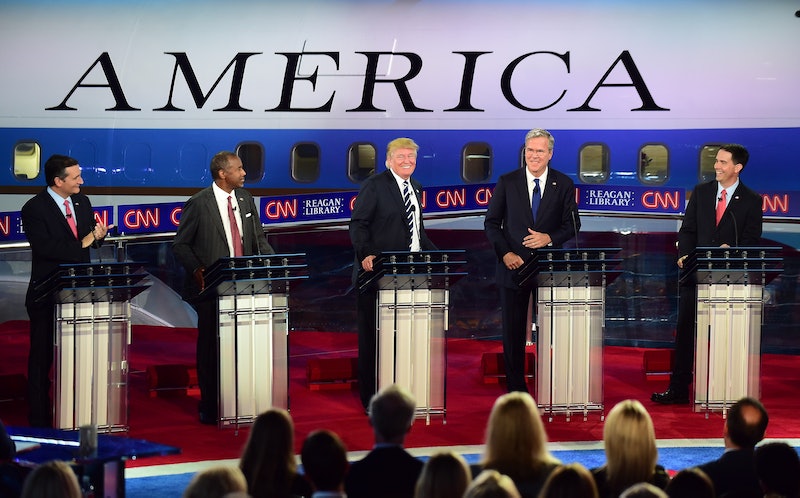 Wednesday night's GOP debate lasted a marathon three hours. During the showdown, 11 of the party's top candidates battled it out for a few more percentage points in the polls. Many of the subjects covered have been dominating headlines lately — the Syrian refugee crisis, immigration policy, and economic reform. However, somewhat surprisingly, several minutes of talk-time were dedicated solely to discussing marijuana legalization and domestic drug policy. While the legalization of marijuana is on an apparent forward trajectory, most of the candidates made clear that they are not in favor of a pro-weed agenda. The drug policies touted by several candidates were undeniably Reagan-esque, and I think Reagan would be proud of the drug policies the GOP candidates touted during the debate.

It should be noted that, at this point in the debate, the GOP field is pretty Reagan-obsessed. During the first debate in August, the debaters invoked Reagan's name 14 times, and during Wednesday night's second debate, candidates referenced Reagan by name 23 times throughout the evening. There's a definite Reagannaissance happening within the Republican party right now, and this became very clear when the issue of marijuana policy came up during the debate.

In the early 1980s, President Reagan upped the ante on the war on drugs, changing the minimum sentencing for convictions related to crack, and First Lady Nancy Reagan started the now famous "Just Say No" campaign, which was largely based on the idea that marijuana is a "gateway drug" that leads to the use of harder and more dangerous drugs such as cocaine or heroin.

That doesn't mean we should be legalizing gateway drugs. And if Senator Paul thinks that the only victim is the person, look at the decrease in productivity, look at the way people get used and move on to other drugs when they use marijuana as a gateway drug.

Carly Fiorina made a couple of statements that followed this rhetoric in the conversation about marijuana; she first stated that her step-daughter had died after struggling with a drug addiction. She went on to add that

But we are misleading young people when we tell them that marijuana is just like having a beer. It's not.

According to one study out of the University of New Hampshire:

Whether marijuana smokers go on to use other illicit drugs depends more on social factors like being exposed to stress and being unemployed, not so much whether they smoked a joint in the eighth grade. Because underage smoking and alcohol use typically precede marijuana use, marijuana is not the most common, and is rarely the first illicit drug used.

So, instead of obsessing, as the Reagans did in the 80s and as some of the GOP candidates do now, about marijuana and the potential and mythical fallout of recreational marijuana usage, they could do more in the "war on drugs" by focusing on economic and other social stress factors that lead to early drug use.

Surely, the candidates are aware of the studies that debunk the gateway drug myth. But in a nod to Reagan and as an appeal to the more conservative base of Republican voters, Bush, Fiorina, and others will continue to push back against marijuana legalization. However, the 1980s are over, and pro-legalization democrats and libertarians like Rand Paul are thinking in the 2000s, and their pro-weed stance is what is gaining steam.