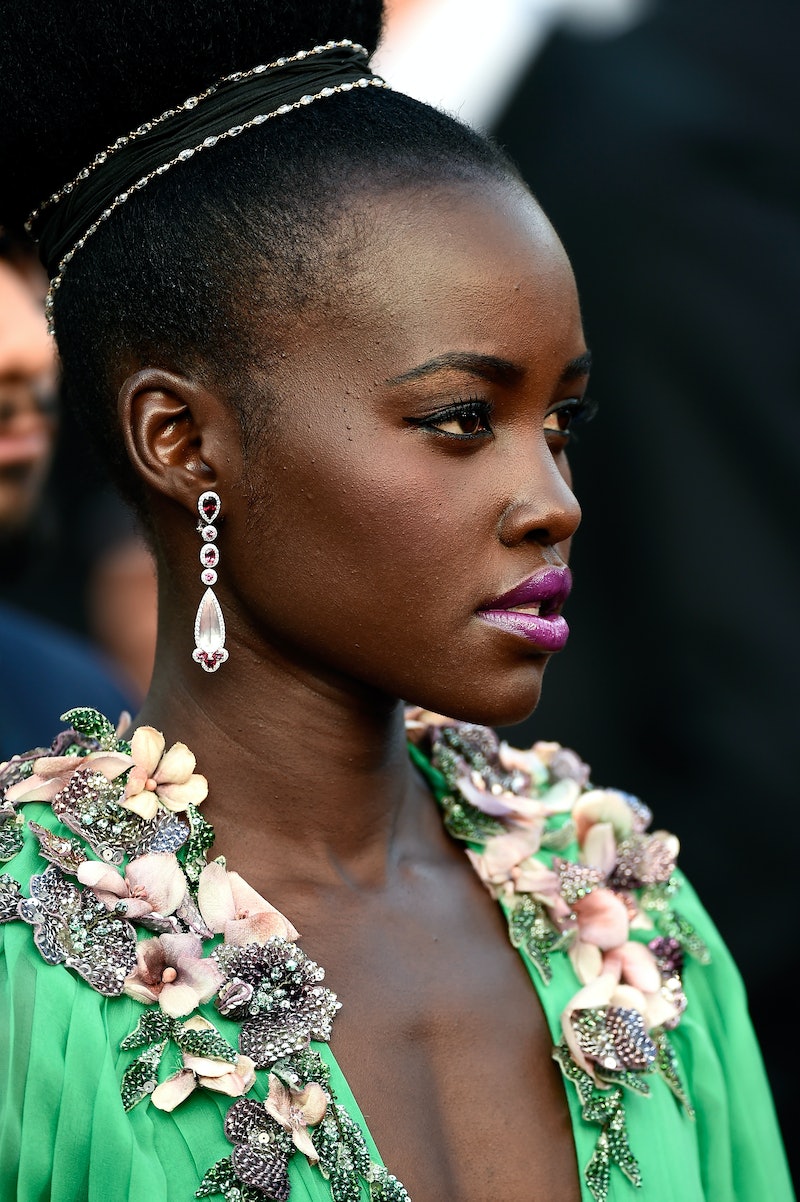 Although it probably comes as no surprise, Lupita Nyong'o is on Vogue's October cover and looks absolutely stunning. This is her second time on the cover of the glossy (her first being July 2014), which makes sense, because the actress is incredibly intelligent, beautiful, and stylish. And let's be real, who doesn't love a little Nyong'o on the newsstands?

Born in Mexico and raised in Kenya, Nyong's first big film credit was playing the character Patsey in the film 12 Years A Slave. Her performance earned her an Oscar for Best Supporting Actress, and since her exceptionally heartfelt and touching speech on equality and civil rights that night, she's become a well-known name and face. Plus, her amazing style (or that gorgeous Prada gown she wore to the Oscars that year) was not about to be overlooked by the fashion industry. And if one Vogue cover wasn't enough to prove she's an industry darling, surely the second one will do it.

Nyong'o looks fierce and alluring in the image, and what I imagine a Greek goddess would look like in modern times. The gold dress she's wearing definitely plays to that image, with cut-outs, red and black detailing, and a color that looks beautiful against her skin. She truly wears this Valentino Haute Couture dress like a piece of art. Her voluminous hair and her glossy, deep berry lips complement the overall look, which as you can see, is drop-dead-gorgeous.

Isn't the cover amazing? And the images inside the magazine don't disappoint either. Apparently Nyong'o's date with Vogue fell in line with the release of the autumn 2015 Haute Couture collections, because she wore only couture pieces in magazine spread. And although I'm probably just wasting my breath saying this, she obviously looks amazing in each and every single gown. From Givenchy to Chanel to Dior, the photographs are ethereal and angelic, and I'm already drooling.

Nyong'o is a great choice for Vogue. Not only is she gorgeous, but she's an activist, an artist, and I guarantee you her career is only going up. She has a voice part in The Jungle Book, as well as a part in Star Wars Episode VII — The Force Awakens coming up. But, it's clear from her 73 Questions Interview with Vogue, that's she's not about to spill any beans about her upcoming projects.

Her new cover is absolutely gorgeous, and quite different from her previous cover last year.

The July 2014 image is definitely brighter, and Nyong'o looks so cute and smiley in that gorgeous printed dress. But I like how the latest cover really showcases her intensity, passion, and fierce-ness. Just like this gorgeous Gucci dress she wore to the Cannes Film Festival earlier this year.

But she can also be sweet and pretty, like in this pearl beaded gown she wore to the 2015 Oscars.

But remember this gorgeous dress from the Oscars the year before? This one is a personal favorite.