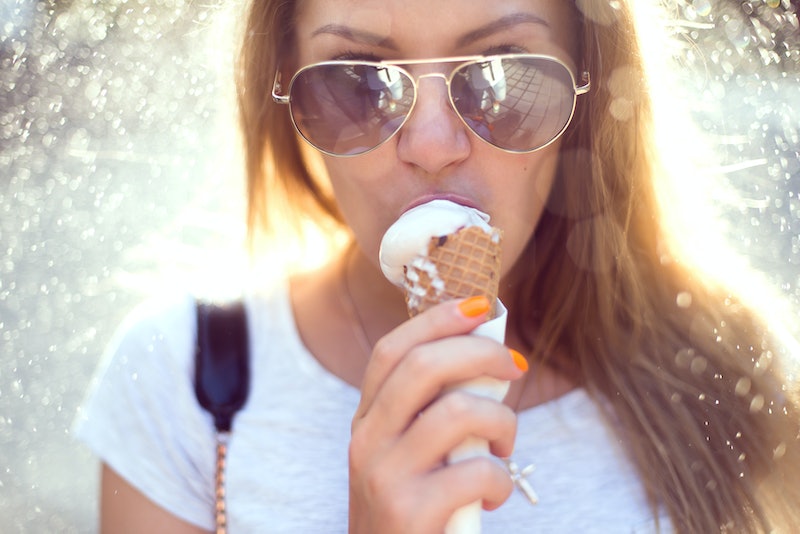 If there's one universally-acknowledged truth, it's that pizza and ice cream are two of the greatest foods known to mankind, and I will hear no differently. In fact, I've spent many a post-breakup pity party wondering why nobody has cut out the middleman and created pizza-flavored ice cream. Then, like any sane person, I realize what a disastrous combination garlic and sugar-milk would be and return to my 248th viewing of Legally Blonde .

What kind of mad food scientist would dare to create such an abomination? According to Design Taxi, we have Los Angeles-based purveyor of "architecturally-inspired gourmet ice cream" Coolhaus to thank for its existence. This is far from the first time the company has thought outside the box for its ice cream recipes — the Pizza flavor joins Cream Cheese & Rye, Peking Duck, and more, which appear to be surprisingly delicious.

"We love when sweet meets savory. Some of our most savory and best-selling flavors are Fried Chicken & Waffles and Brown Butter Candied Bacon," Coolhaus spokesperson Angela Hanks told Munchies. She went on to point out that pizza, although savory, has some sweet components that make it so darn delicious at 3 a.m.. (And also any other time of day.)

No matter their previous successes with weird ice cream, it's natural to remain a little skeptical. So what exactly is pizza ice cream made of? According to Design Taxi, it all starts with a marscapone and olive oil base, followed by sun-dried tomato, basil, and salt. Together, Hanks claims that it actually tastes like... well, pizza.

"The mascarpone base gives it a creamy and slightly sweet cheese flavor, the tomatoes are sweet and sour, the olive oil is earthy, and the fresh basil is herbaceous and bright," Hanks told Munchies. If you just started salivating reading that, you're not alone. Somehow, pizza ice cream sounds... kind of delicious.

If you're interested in trying the flavor for yourself, you can hit up the Culver City and Pasadena stores as well as the Los Angeles food trucks.

Believe it or not, pizza ice cream isn't actually the weirdest combination out there. Let's take a look at some of the strangest ice cream flavors known to man.

What's not to love about ice cream designed to taste like foie gras, a.k.a. the liver of a duck force-fed corn through a feeding tube? Oh wait.

Are you still annoyed at the jellyfish that stung you during your beach vacation last year? Ice cream company Like Me I'm Delicious has away of getting back at the species: Jellyfish-flavored ice cream, which uses jellyfish protein as the main ingredient. Oh yeah, and it glows.

English ice cream parlor Teare Woods has created the most English of all ice cream flavors: Fish and chips. Everyone else can go home now.

New York's Il Laboratorio del Gelato has come up with some weird flavors in the past, but the fig and turkey option is a clear winner.

I'm honestly tempted to try Las Ventanas al Paraiso's tequila ice cream, possibly followed by Jude's gin and tonic flavor. So what if they can't get me drunk? I will find a way.