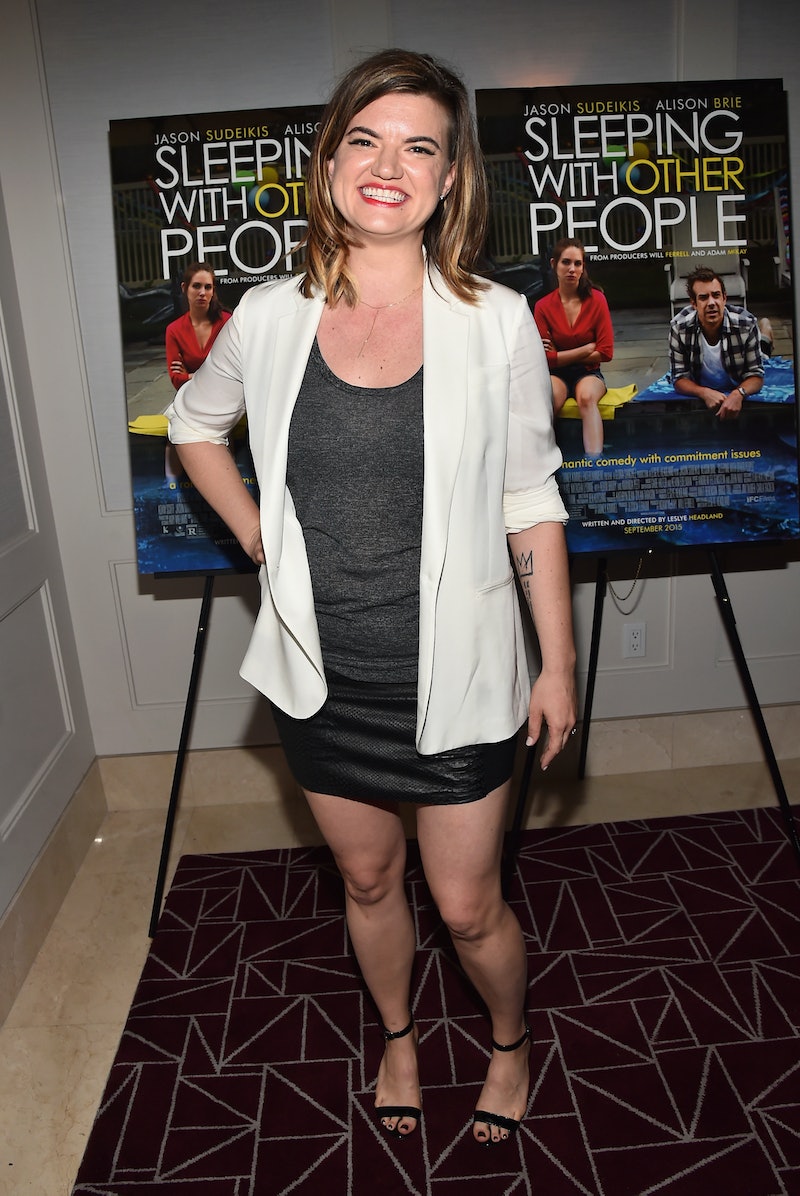 With movies like Bachelorette and Sleeping With Other People , director Leslye Headland is shaking things up with the traditional rom-com. In both of her films, she pits old-fashioned ideas against modern people, arguing that society's conventions about things like sex and romance don't always line up with reality. She says making fun of these ideas — or, simply, ignoring them — is often the best way to dismantle them. A prime example? About Last Night , a 2014 film that Headland wrote starring an all-black cast, a remake of the 1986 rom-com.

"When I wrote [About Last Night] movie and they were like, 'urban movies do well,' I was like, 'Whoa. What movies do well?'" Headland tells Bustle. "I was like, 'I am a white chick and I wrote that movie.' It happens to have a black cast. I don't think of it as an urban movie. I'm not putting in anything about my experience as a white chick from Connecticut. They're people. I love them. I guess it's a black cast. They were amazing. That's the end of that."

Just as she's set on tearing down cliches when it comes to portraying women and romance, Headland pushes the status quo when it comes to diversity in Hollywood. It shouldn't be about hiring women, people of color, members of the LGBT community, or other minorities solely for the sake of hiring them — it's about being aware of the fact that hiring and casting white, heterosexual males may be the standard for Hollywood, it doesn't have to be the only option.

Any time you rely solely on Hollywood's long-held traditions, you're sidelining success and making actors, directors, genres, and stories sound like fads. Instead, it's crucial to make and support films that highlight people from all genders, races, and sexual orientations. That said, the director is not too keen of labels like "urban" or "female-centric" on movies. With Bachelorette, Headland says it was labeled as a "female-centric film," but in fact, the number one demographic that came out to see the film were not women, but gay men.

"Women from ages 35 to 45 hated that movie — hated it!" Headland says. "To call it a female-centric movie is also not true. So to say that I'm a female-centric director actually isn't true because women f*cking hated it."

Headland says that there are amazing films like Out of Africa and Working Girl that have strong female leads, but she points out that they used to be referred to as something else other than female-centric.

"They [used to] call those films 'Sydney Pollack films' or 'Mike Nichols films' because it was based on who was directing them and who was distributing them," she says. "I just think that it's so fabricated now. It's a little bit of a bummer."

But at the end of the day, it's not about how much it makes at the box office or if it is a "four quadrant movie," the term for a film that appeals to men and women both over and under 25, but about telling a good story and finding a passionate audience.

Says Headland, "I think the more we can just call it a good movie, good actor, or good director, the better."