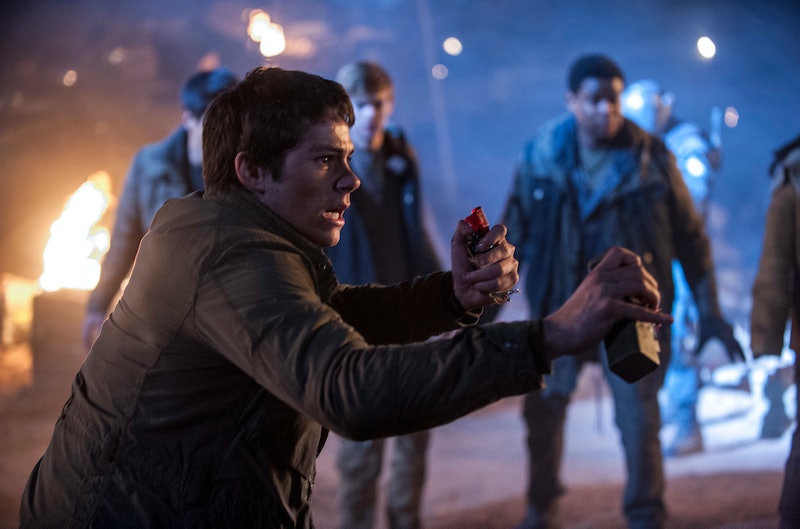 Maze Runner: The Scorch Trials is a sequel and as we all know, some sequels don't necessarily live up to the originals — but if the follow-up is part of a trilogy, it's a totally different story. The Scorch Trials is the second installment of the Maze Runner franchise based on the dystopian young adult novels by James Dashner. Usually, the second part of a trilogy has the biggest twist of the three movies. In Empire Strikes Back, we learn that Darth Vader was Luke's father and in Catching Fire, we learn that Katniss is the key to the revolution, District 12 has been obliterated and that the elusive District 13. Having a huge cliffhanger makes sense because it raises the stakes, leaves the audience salivating for more, and is a bridge to an epic finale. The ending of The Scorch Trials, the second film in the Maze Runner franchise, is an avid follower of the traditional trilogy format that will eventually lead to the third and final Maze Runner movie: The Death Cure.

It is clear that this movie is a big chunk of the overall story of Maze Runner hero, Thomas (Dylan O'Brien). It's longer, there's a lot more action and more at stake, and more characters (although some of them die off, unfortunately). There's a lot crammed into a 131-minute runtime, but its the ending that gives a hint as to how awesome the final installment is going to be. (Spoilers ahead!)

After Thomas and his fellow Gladers (Minho, Frypan, Newt, Teresa, and Aris) escape from the WCKED laboratory, they trek through the Scorch, a wasteland of nothing but sand and walking dead creatures called Cranks. Their end goal is to find The Right Arm, a rebel group living in the mountains that is against WCKED. They go through their fair share of dangerous obstacles and they pick up two frenemies, Jorge (Giancarlo Esposito) and Brenda (Rosa Salazar) along the way, who claim they can help them.

Eventually, with the help of their new peer, Aris (Jacob Lofland), they get into The Right Arm's camp. At first, they aren't welcomed by their leader Vince (Barry Pepper), but a woman Mary (Lily Taylor) says to let them in. She's the camp's doctor who used to work for WCKED and she recognizes Thomas. She knows more about him than he does. Turns out she's the one who knows how to make a "cure" for anyone who's been infected by the "flare" — which helps, considering Brenda was bitten by a Crank.

All seems well and the entire camp is set to move in the morning. Thomas sees Teresa (Kaya Scodelario) standing on a high cliff looking out into the distance. He goes up to talk to her and while they are talking, she drops these subtle hints about something she has done. Then, in the background, we see two helicopters flying towards them. It turns out that Teresa has been working for WCKED all this time and she led them to the Right Arm's camp.

A battle breaks out between the WCKED army and the Right Arm struggles. They are eventually beaten and the head of WCKED, Ava Paige (Patricia Clarkson), flies in to see all the prisoners that they are about to take in to be tested on and have their blood "harvested" for the cure — but Thomas is nowhere to be seen.

Ava exchanges words with her old friend Mary, until Ava's right-hand-henchman Janson (Aiden Gillen) shoots her. Thomas comes out with a bomb and a detonator and threatens to blow everything up. They need his blood for the cure. They take him down and all hope is lost until Jorge, who everyone thought had left during the battle, crashes through the scene. Chaos ensues.

Ava's men try to gather as many prisoners as they can before they take off. In the middle of it all, Minho (Ki Hong Lee) gets captured and WCKED flees the scene. Before they take off, Thomas locks eyes with Ava and Teresa as the plane door closes. The next morning, while recovering, Vince says that they have to move on, but Thomas makes a speech that motivates everyone to go save Minho, go after WCKED, and kill Ava.

There's a final battle coming in The Death Cure — and I can't wait!

More like this
'Girls Trip 2' Will See Our Fab Four Enjoy An International Adventure
By Maxine Harrison
How Andrea Riseborough Got Nominated — & Almost Disqualified For An Oscar
By Jake Viswanath
Austin Butler Recalls Lisa Marie Presley Showing Him Elvis’ Bedroom
By Jake Viswanath
Pamela Anderson’s Dating & Marriage History Could Be Its Own TV Series
By Jake Viswanath
Get Even More From Bustle — Sign Up For The Newsletter
From hair trends to relationship advice, our daily newsletter has everything you need to sound like a person who’s on TikTok, even if you aren’t.