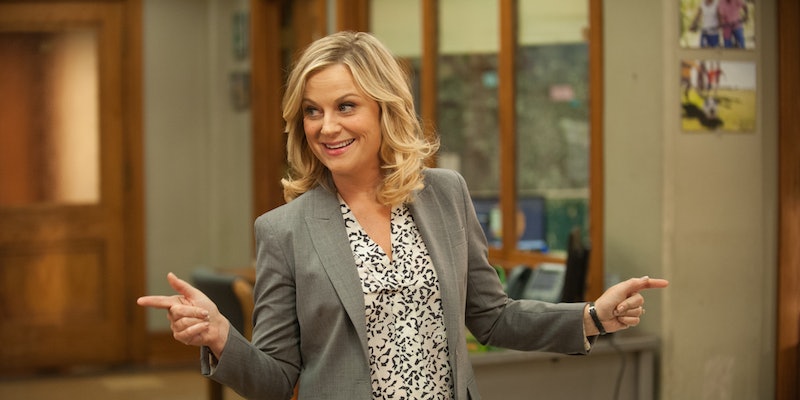 Amy Poehler has yet to win an Emmy for her portrayal as Leslie Knope on Parks And Recreation, and if you think this is blasphemous/should be illegal, you are not the only one. Because, seriously, Leslie Knope is a television icon. She's the kind of character that actually elicits real feelings in you — predominately feelings of the happy variety. I actually can't think of many other TV personas that put a smile on my face the minute they show up on the screen apart from Leslie.

I have often wondered though: How did the perfect comic heroine that is Leslie Knope come to be?

In Poehler's hilarious and poignant memoir released earlier this year, Yes Please , she shared some insider information regarding the creation of Leslie. For one, Poehler was pregnant when the creator and producers of the show, Mike Schur and Greg Daniels, approached her with an idea of a The Office-esque spinoff. Mike Schur actually wrote about this in the footnotes of Poehler’s book, explaining that for them, it was “Poehler or bust.” There’s something to be said about the intuition behind this — on some level these two knew that the only actress who could carry an Office spinoff would be Poehler. I think we all owe them a pat on the back (or awkward high five) for standing by that.

Poehler went on to explain in her book that Leslie was to be "an extremely low-level Parks and Recreation Department employee who had big dreams. She was inspired by the 'Yes We Can' spirit of Obama's recent election. She believed that it only took one person to make a difference. She wanted to effect change, she wanted to someday be president, but most importantly, she wanted to turn an empty parking lot in her town into a park.”

Sounds just ridiculous enough to work, right? Poehler wrote, "it took five minutes to realize Leslie Knope was the best character ever written for me." TRUTH. No one could have given a better performance than Poehler. No one could have made Leslie Knope so flawed, but so lovable. No one could have shown us that it was possible to have an outspoken feminist be the lead of a comedy show. Much like Knope set out to do, Poehler did make a difference, and she did effect change.

You hear that Television Academy? Give the woman her Emmy already!

Now as far as how the kinks and nuances of Leslie Knope's character were fleshed out, Poehler told an interviewer back in 2012 that she was inspired by Girl Scouts, pioneers, and the suffragettes. Which is, really, really just. Perfect.

In the words of the character herself: Leslie Knope, I love you and I like you. (And I still will, even if you don't win.)