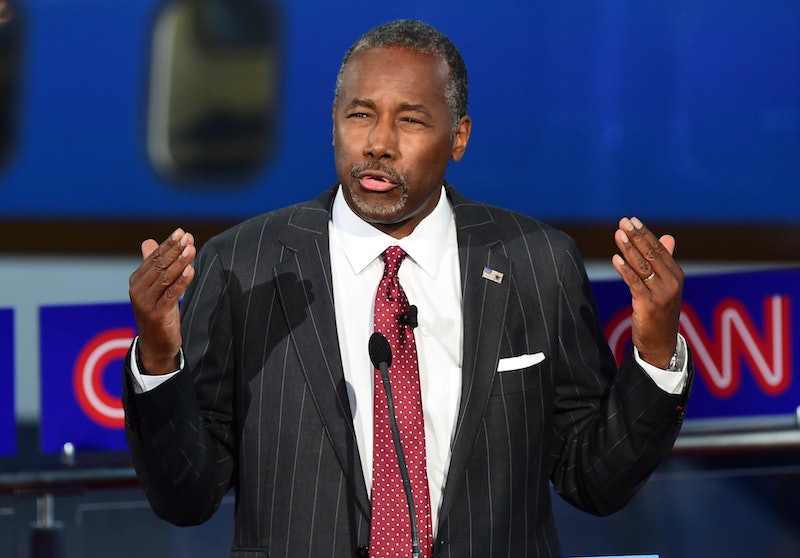 The doctor was supposed to be in the house Wednesday, but Ben Carson dropped the ball when given the perfect opportunity to put his University of Michigan medical degree on display. During the second GOP debate, moderator Jake Tapper asked the former neurosurgeon whether front-runner Donald Trump should stop linking vaccines to autism while on the campaign trail. The middling answer was, well, disappointing, considering Carson's stance on vaccines have been spot-on in the past.

Carson, having seen a boost in polls after his first debate performance, stood directly to the right of center-stage Trump (20 inches away, to be exact), and the proximity seemed to have dissipated any fiery backlash. Carson said, "Well, let me put it this way. There have been numerous studies, and they have not demonstrated that there is any correlation between vaccinations and autism."

Yes, this is true, and thank you for saying so on live TV in front of tens of millions of Americans. But his answer is such a huge step back from what should have a clear and resounding 1) No, vaccines are not linked to autism, and 2) Yes, Trump is wrong. Granted, Carson's style is on the quieter side (and it seems to be working at the moment), but this was an opportunity to put Trump down a notch or two all while playing up his medical expertise.

Considering where Carson was on the vaccine issue earlier this year, his comments were hugely disappointing. Carson had no problem making a stand in February, when he told Tapper on CNN's The Lead that vaccinations should be mandatory and enforced by the government with no exemptions for people citing religious or philosophical beliefs. "A lot of people are put off when they hear the word 'government force,' and perhaps there's a better way to put these things, but the fact of the matter is, studies have shown us over the course of time that the benefit-to-risk ratio for vaccination is way in the favor of doing it as opposed to not doing it." On Wednesday, Carson would go on to contradict himself by saying lesser needed vaccines shouldn't be "pushed by big government."

So just how did Carson go from mandatory to pick-and-choose? As a famed doctor, Carson knew better and should have done more to dispel the anti-vaxxer movement that has suddenly become a pillar in the Republican Party as reasonable folks suddenly ditch sound science in favor of "defending personal freedoms." A firm and resounding defense of vaccines could have been a big part of Carson's campaign, one that would have used his field of expertise to his political advantage.

Carson is still a brilliant doctor — I mean, seriously, the first to separate conjoined twins? — but the doctor was out when it came to vaccinations. Maybe it was an off night? But then again, even deigning to joke that Trump was an "OK doctor" makes me want to question Carson's expertise on anything medical.