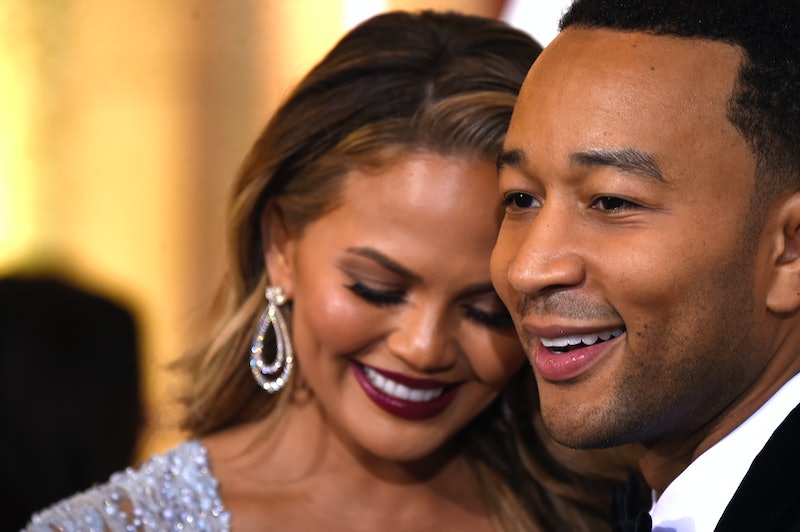 I almost can't believe this is happening because it seems way, way too good to be true. However, this is not a drill. We might very soon see a TV show based on John Legend and Chrissy Teigen's relationship on ABC as the show, entitled Ordinary People after a John Legend song, has received a pilot order from the network. There's still a chance that the pilot might not go to series, but I'm keeping my fingers crossed that this music-heavy romantic comedy about "an interracial couple with very different personalities and big ambitions" will one day become my favorite TV show. Between Teigen's career as a model, television star, and Internet personality, and Legend's career as a Grammy-winning singer songwriter, having the pair of them signed on as executive producers for this project is more than enough for me to put my utmost confidence in it. But will John Legend's music be in Ordinary People? Or will the soundtrack feature songs that are completely original?

To be fair, those questions seem like they might not be mutually exclusive. After all, as the executive producer, Legend might decide to produce original songs exclusively for the sitcom, the way original songs are written from Empire. (Or perhaps not the exact same way, as the songs that Legend write might be background music for scenes rather than being directly related to whatever is happening in the plot.) Why would they need to hire someone completely fresh to write original songs for Ordinary People when John Legend is, like, right there? Did I mention the part where he's a Grammy-winning singer songwriter?

If Legend does produce all the music for the sitcom, then that means that along with this show will come an entire soundtrack full of songs that more or less describe the developmental arc of Legend and Teigen's ongoing marriage. I repeat: we could one day be setting our iTunes to pre-order an entire CD about Legend and Teigen, who are the relationship goals for so many people that I occasionally believe that the people who don't consider them relationship goals have just never heard of them. They both seem like completely wonderful, intelligent, passionate people with a focus on social justice and, well, each other, and their goofy Instagram pictures and fond interactions with their fans are enough to bring a smile to anyone's face. Unless you have, like, no heart or something. A soundtrack about the two of them could catch fire even faster than "All Of Me."

The show is still in the earliest stages of development, so there's no real answer to the question of what exactly the music of the show will sound like, and all we really know is that music will definitely be playing a large part in the show. Whether every song is written and performed by John Legend or not, I can't say I'm not excited to watch the show if and when it finally goes to series. Whether I'm listening to Legend or feeling incredible FOMO with regards to his marriage, I'm a huge fan of him, and I'm a huge fan of Teigen. Seeing more of their work in the pop cultural sphere can only be a good thing.

At the very least, I think we already know what the theme song will be.