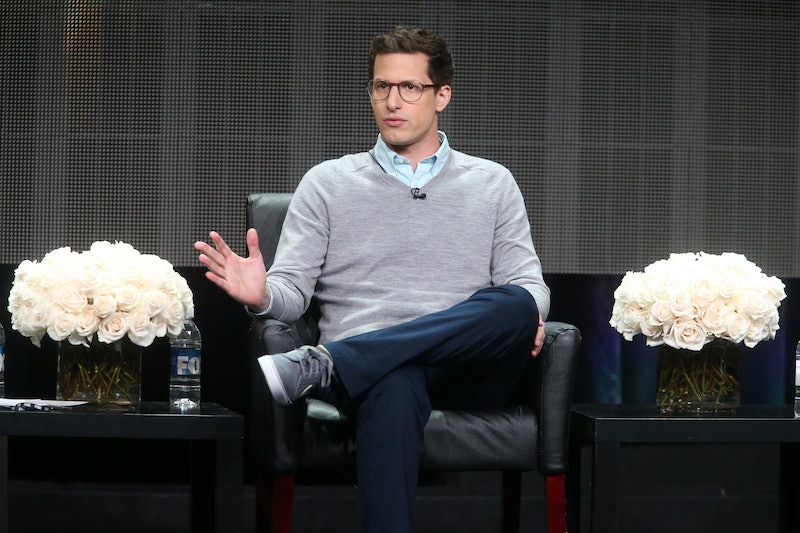 We're only a stone's throw away from the 67th Annual Emmy Awards, and, in preparation, I'm trying to acquaint myself with all of the 2015 Emmys nominees. Somewhere along the line, I realized: there are a lot of Saturday Night Liv e alums attending, with a few nominees making up the roster, and, of course, Andy Samberg is taking up hosting duties for the Emmy Awards this year. And it makes me wonder how has SNL prepared this year's attendees for (potential) Emmy greatness? Consider the following.

Starting off with Samberg, last year we were given a taste of his Emmy presence when he terrorized Lena Hadley with a Joffrey Baratheon impression. Funny in the moment, very. If we have a whole show of this, it's going to get tired really quickly. But impressions weren't what Samberg was known for on SNL. No, for me, Samberg is still solidly the focal point of The Lonely Island. And, now that he's sharpened his musical prowess with gems like "D*ck in a Box" and "I Just Had Sex," we can expect a lot of highly inappropriate numbers on stage. Excellent. Though I thought it was an unconventional pick at first, Saturday Night Live has definitely prepared Samberg to be a performer.

This year marks a first time Outstanding Lead Actor in a Comedy Series nomination for Will Forte for his role as Phil Miller on Last Man On Earth. Now, of course, you can't snag a Lead Actor nom while in the thick of an improv ensemble, but it's easy to argue that Forte's experience there forays into absurdist comedy. Throughout his SNL tenor, Forte portrayed a melange of bizarre characters, such as the twisted Hamilton Whiteman. In fact, Forte gave a toast at Seth Meyers' wedding as the flaxen-haired creep, showing he can really bring it outside of 30 Rock (oh, and literally 30 Rock ). He showed that he could play the leading man with MacGruber. Last Man on Earth shows Forte is finally ready to lead a primetime piece and really push the envelop conceptually. Will it get him the gold? SHRUG.

Now, Amy Poehler is an interesting case, because we've grown to know and love her as both Leslie Knope, and our imaginary best friend over the past few years. This year is her final chance to be nominated for an Outstanding Leading Actress for Parks and Recreation, and, like Knope herself, she's done good work and is definitely due for success. In relation to Saturday Night Live, though, how has it prepped her for this Emmy nod? Viewers know, inherently, that she was on Saturday Night Live, but is that what defines her anymore?

Consider this: during the 2008 Presidential election, Poehler played an ever-frustrated Hillary Clinton to Tina Fey's Sarah Palin. This was practically milliseconds before Parks and Recreation debuted in 2009. Though Leslie Knope had considerably more pep and waffles opposed to Clinton, it could be argued that Poehler's first political venture helped plant some seeds for the future President Knope. And before you tell me that Julia Louis-Dreyfus was on SNL too, I am aware. But Louis-Dreyfus is Elaine Benes first, Selina Meyer second, fierce badass third, former Saturday Night Live player 15th. Puh-lease.

Conclusion? Saturday Night Live is a great line on your resume, and having that kind of chameleon-like ability will make you shine in the big leagues.