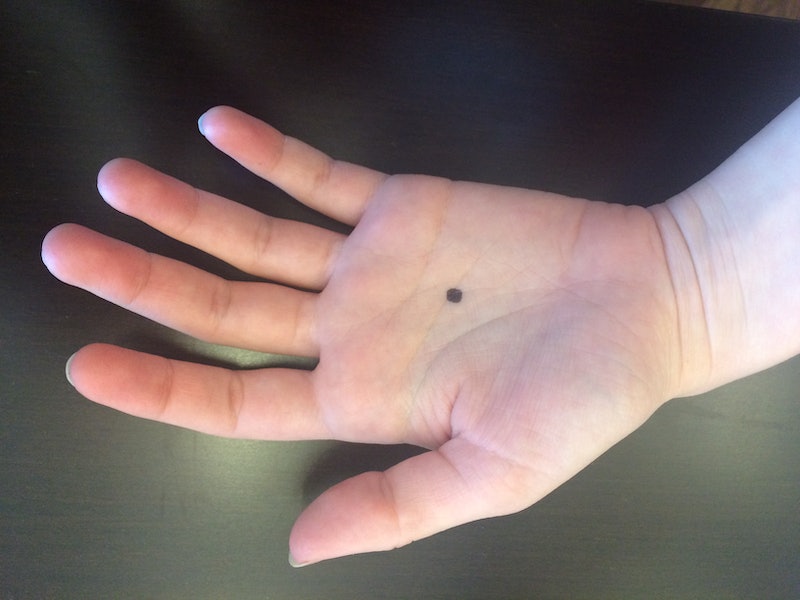 An important and controversial social media campaign, The Black Dot campaign, is encouraging domestic abuse victims to draw black dots on their hands. Launched a few weeks ago, the anonymous creators of the campaign are hoping that victims can use the black dot as a subtle but hugely powerful marker to people on the outside of their abusive relationships that they need help. So far, the campaign on Facebook has reached over 5 million people, and thousands of them are helping signal boost the campaign both by sharing it. Exposure is also coming through domestic abuse survivors who are boldly coming forward and using the dot as a symbol to show that they survived the abuse that others are enduring right now.

At the time, though, the campaign is controversial for several reasons people are pointing out on Facebook and Twitter. One is that professionals are not yet trained to recognize the black dot as a signal for help. The people who have the best ability to act — namely social care workers and medical professionals — are, of course, trained in the ability to recognize signs of abuse, but the black dot is not widely recognized enough yet to be an effective tool for them. And that same recognition might also be problematic, should a victim's abuser recognize the symbol and its implications, putting the victim in even more danger.

People have also been quick to defend the campaign on social media, though, pointing out that right now, any kind of chance to help is better than no chance at all.

The organization itself points out in a Facebook post that they acknowledge the points that people are picking apart in social media, and addressed them:

This campaign has quite literally taken off in only 6 days. 4.8 million people worldwide have been reached. Whilst that is absolutely outstanding that we are speaking up about such a subject, we need to remind everyone of a few things:

- The original ethos for this campaign was to enable a victim to put a dot on their hand around someone they trusted to enable a conversation to start, so they could open that door and hopefully start a process of seeking professional help.

- This is an idea, thinking outside of the box, trying to open up the worlds [sic] eyes and ears to what is going on in terms of abuse. The idea came from a former domestic violence victim.

- Professional bodies have not been advised or trained in the Black Dot, what it symbolises and what it means

- This isn't the solution that will help everyone, if anything it should help people realise what abuse is, how it affects people and how to access help.

- and most importantly SAFETY MUST ALWAYS COME FIRST. If you see a black dot or are approached by someone for help, if safe to do so take them to safety and get them in contact with the relevant agency. Intervention and support should only be done by professionals

In the meantime, people have started sharing their own black dots and stories via social media. Although the black dot campaign encourages victims to use tiny, barely noticeable dots so as not to attract too much attention to them, people who are posting in solidarity with the program are posting thicker ones in ink:

So far, the people behind the campaign say that the black dot has saved several people from their abusers. In addition to providing a signal, the campaign has also become a community at large for people who are enduring domestic violence, giving them a platform to anonymously come forward and seek advice and resources to the help that they need.

To learn more about the Black Dot Campaign, visit their Facebook page here.