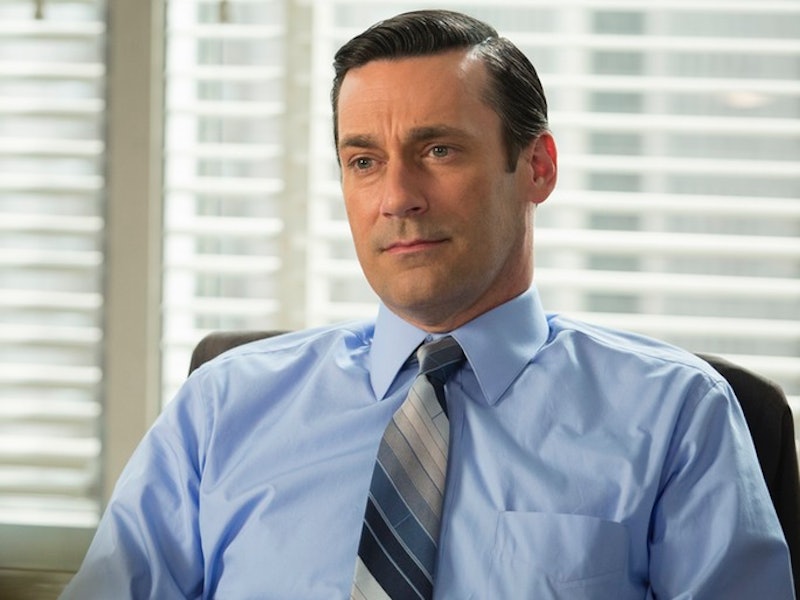 If you're still grieving over the loss of AMC's pivotal drama Mad Men, I know that feel. Despite having an entire summer to properly mourn bidding the eclectic cast of characters adieu, I still find myself embedded in Mad Men—esque reveries where I contemplate what possible story arcs and character developments could have been had the show stuck around for another season. Would Peggy Olson and Stan Rizzo — otherwise known as the ultimate in #RelationshipGoals — have gotten married? Would Don Draper return to advertising decidedly less stoic? Moreover, would any of us actually like to see a Don that isn't painstakingly broody? These — and other questions — taunt my psyche on a semi-regular basis. Yes, I may be overly invested in this show.

Following the series finale, there were murmurs about Mad Men getting spin-offs — most prominently, one that would follow the lives of Don's daughter, Sally, and Peggy. Sadly for fans who cried "YAS!" at this prospect, it doesn't appear that these spin-offs — or any Mad Men spin-offs, for that matter — will ever come to be.

According to a September 20 report from E! Online, series creator, Matthew Weiner, has gone on the record to state definitively that a Mad Men spin-off will never, ever happen...ever.

"I'm not judging people who do spin-offs, but despite the temptation and I love these characters and love working with these people, I'd like to leave the show the way it is.... There was sort of a demand during one of my contract negotiations that along with a lot of other things that I do a spin-off as well.... I just said no to all of it because I was trying to fight for keeping the cast that I had and keeping the length of the show, so after that I never heard another word. They've been so respectful and such great partners creatively that there's never been any discussion or overture for future work or for a spin-off."

I have to respect Weiner's reasoning here. As difficult as it has been for me to let the series go, the fact that Mad Men ended on such a high note crystallizes the show as one we can always look back on fondly. There are actually a plethora of reasons that a Mad Men spin-off could be bad news bears.

1. There Would Be Opportunities To Jump The Shark

Sure, there have been plenty of great spin-offs throughout television history — but there have also been many spin-offs-that-shall-not-be-named that have served as little more than a cautionary tale. Think of how terrible it would be to have Mad Men's esteemed reputation tarnished by a spin-off that is subpar.

With Peggy's storyline ending with her and Stan finally, finally professing their love for each other, the ultimate fate of their relationship can be left up for interpretation. I personally like to think these two lovebirds stayed together and that their lives were marked by career successes, skips through fields of daisies, and rainbows. If a spin-off happened, we are all vulnerable to seeing this relationship potentially go down in flames.

What could be worse than the aforementioned couple calling it quits? The two would get really, really boring. Let's face it: Televised relationships are at their most entertaining when two people are secretly infatuated with each other, attempting to avoid hooking up (again), or if there is an on-again, off-again component à la Ross and Rachel on Friends. I have never once yawned during a Peggy and Stan scene, and I don't intend to start anytime soon.

4. Does Anyone Really Want To See An Upbeat Don?

I mean, honestly? I appreciate that Don was able to truly face his demons in the series finale and — seemingly — find some enlightenment, but the brooding protagonist's complex malaise was part of what made him such an enthralling antihero.

5. Does Anyone Really Want To See Pete As A Good Guy?

After seven seasons of being the character you loved to hate, Pete Campbell's hubris devolved and he finally gained some maturity when he reconciled with Trudy, and the two — along with their daughter — flew off into the sunset together. I'm all for a happy ending, but that's what it was — an ending. I don't want to see a spin-off that doesn't feature Pete, but I also don't think there are any stories left to tell about this character. The series wrapped his story — and the other characters' stories — up perfectly.

6. Betty Will Forever Be Immortalized

In arguably one of the most heartbreaking moments of Season 7, Betty Draper's fate was sealed by a terminal cancer diagnosis. Although fans know that the character would not live past a year, a spin-off that didn't feature this iconic character would be lacking, IMHO.

7. The Original Cast Can't Be Beat

Spin-offs can't include every member of an original ensemble — otherwise, they wouldn't be spin-offs. Every carefully crafted character (how's that for alliteration?) on Mad Men deftly played into each facet of the show's landscape. I honestly couldn't imagine a Mad Men spin-off being able to live up to its predecessor without each of the memorable characters — and guest appearances simply wouldn't cut it for me.

For those still mourning the end of Mad Men, take heart in the fact that the series will always be remembered as an iconic one that didn't overstay its welcome. Plus, we still have seven seasons worth of episodes to binge re-watch at our leisure.