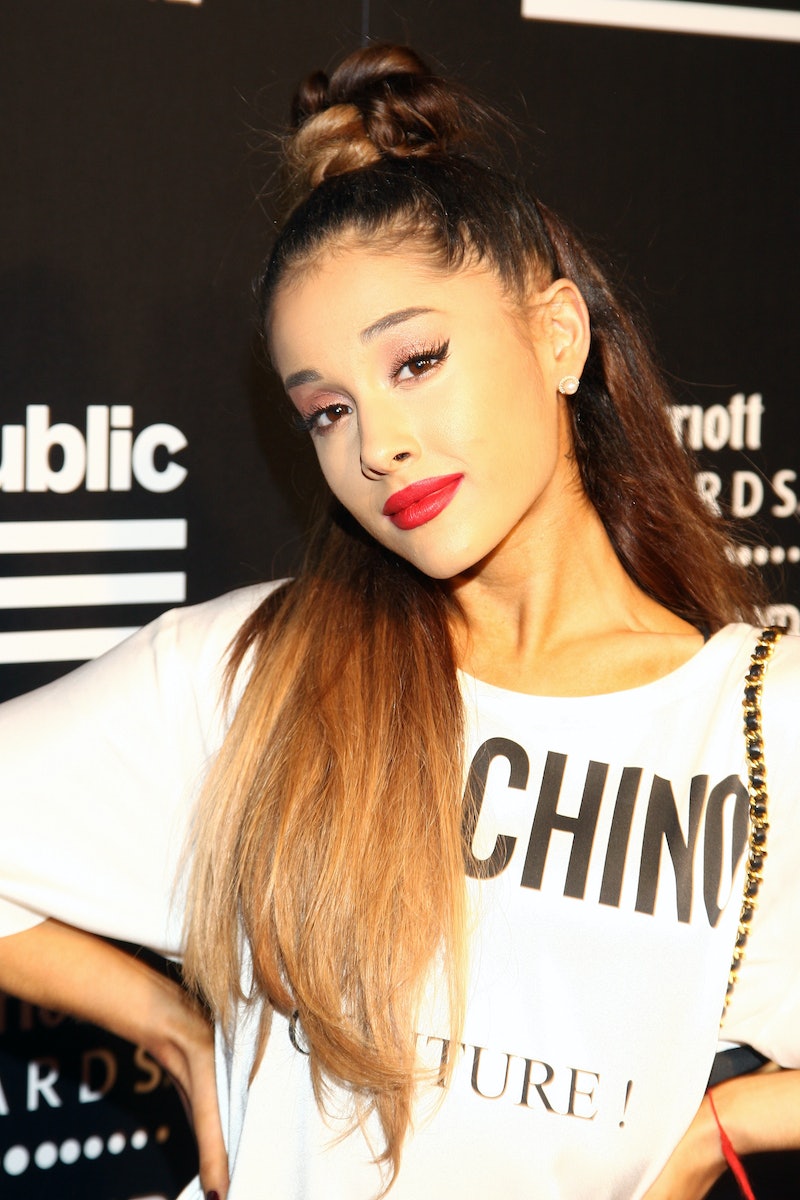 Is the signature half-up, half down ponytail look on its way out for one of our favorite, well-coiffed pop stars? I'd guess probably not, but Ariana Grande's naturally curly hair was on display in an Instagram photo recently. The Scream Queens star noted that we don't see her loose curls very often via her "long time, no see" caption.

Um, how about "long time, never see?" I was shocked that Ari has naturally curly hair. I thought her natural texture could have been wavy, but curly? That's news to me. It's yet another Ariana Grande hair secret revealing itself.

Arianators are so used to Grande's impossibly thick, stick straight hair, which she usually pulls into a partial ponytail. She is the master of half-up, but half-down hair, yet she is often defending herself on social media for always rocking the same 'do.

She has switched things up from time to time, even if it isn't something that happens very often. For example, Grande has faked bangs with a wig and looked adorbs. But these curls? Pretty amazeballs.

How refreshing to see her hair natural and flowing! Grande has confessed to enhancing her strands with extensions. Being a global singer and actress, she is always in the public eye, with done up hair, even on her social media posts. So to say that she is brutal on her locks in terms of treatments and upkeep would probably be a bit of an understatement.

Grande's cascade of curls is so pretty. It really reminds me of Mariah Carey in the early '90s. The curls appear so healthy, bouncy, and touchable. The singer posted a four-panel photo of her hair so we could admire the ringlets from multiple angles.

Looks like Ari has another similarity to Mimi besides that powerhouse voice.

Here's the signature up, down, and straight 'do, in case you were longing for another look at it.

She went with a more-down-than-up-do and just so happened to meet Robert De Niro.

Those mini buns were so cute.

More mini buns! She must be able to communicate with life on other planets.

Slick, straight, and super long. She had a thing for the mini buns this summer.

This is likely the most perfect manifestation of her signature 'do.

Here's another Ariana Grande hair moment that was as rare as her curls. Grande wore her hair totally down to the 2014 Kids' Choice Awards. No ponytail.

It was quite a sleek and chic look. It was also one of her most "grown up" hairstyles. Ponytails can be either ageless or totally young and hers usually skew young. It was killer to see her commit to a down 'do here.

I'd like to see Ariana Grande show off her curls again in the future beyond Insta. Perhaps to a red carpet showing? Bring it, Ari!