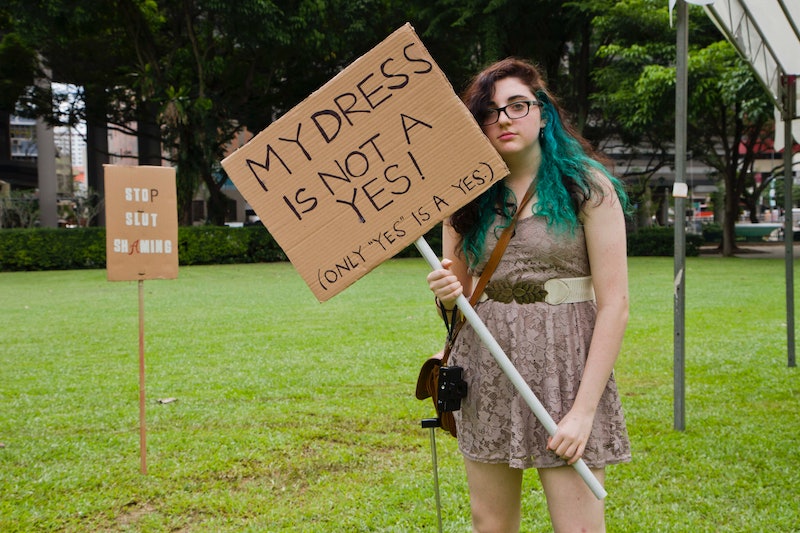 The 1975 book Against Our Will: Men, Women, and Rape brought sexual assault into the national spotlight as an issue worthy of our attention. But a recent New York Magazine interview with the book's author, Susan Brownmiller, now 80, showed that even an anti-rape activist can harbor some dangerous misconceptions about sexual assault. After reading the interview, Kate Harding, author of Asking for It: The Alarming Rise of Rape Culture — and What We Can Do About It, went as far as to say that "it's time to let go of a hero." She writes:

Every feminist writing and speaking about rape culture today owes Brownmiller a debt of gratitude. But we also owe it to victims and young people to denounce much of what she has to say on the subject today.

What statement or statements could be so harmful as to prompt those who had once been inspired by the long-time feminist activist to "let go" of their hero? Many of Brownmiller's comments in the interview, such as those on what she termed "the problem of consent," come across as trivializing and victim-blaming. They also highlight a number of misconceptions rampant in popular discourse about sexual assault.

Here's why those myths are wrong.

"It is a little late, after you are both undressed, to say 'I don’t want this,'" Brownmiller says — but It's never too late to revoke consent. If someone continues to engage in a sexual activity after their partner has told them to stop, that is rape. Oddly, when New York Magazine mentioned to Brownmiller that men should respect if a woman wants to stop during a sexual encounter, she responded, "That would be nice. There is not much attention on them, is there?" No, there is not, but there should be. By teaching women that it's too late to revoke consent once you're both undressed, we're teaching men that once their partner's clothes are off, anything goes. Not that sexual assault is always committed by men against women; that's another widespread myth. No matter what the partnering might be, if just one of the participants says they want to stop, then the activity needs to stop. Period.

After following discussions about rape on college campuses, Brownmiller is concerned that college women "don't accept the fact there are predators out there, and that all women have to take special precautions. They think they can drink as much as men, which is crazy because they can't drink as much as men. I find the position 'Don't blame us, we're survivors' to be appalling." But rapists don't suddenly become rapists because someone around them is drunk. They may use alcohol to take advantage of a victim, but that it is not the victim's fault. There are direct consequences of drinking, like getting sick or hungover, but rape is not a side effect of alcohol poisoning. People should be able to make decisions about alcohol without considering rape as a consequence.

"The slut marches bothered me, too, when they said you can wear whatever you want. Well sure, but you look like a hooker. They say, 'That doesn't matter,' but it matters to the man who wants to rape," she says. But rapists don't decide to become rapists because of what someone is wearing, either. Once again, they have already made the decision, and even if they use the victim's clothing to later argue that "she was asking for it," this does not mean that the clothing led them to rape. People get raped in all sorts of attire. Rapists look for easy, not sexy, targets.

Brownmiller did not say this directly, but saying that "[looking] like a hooker... matters to the man who wants to rape" edges dangerously close to the myth that sex workers can't be raped. There's a reason that Chicago Sun-Times collumnist Mary Mitchell got into such hot water just last week for arguing that the rape of sex workers should be classified as "theft of services," rather than sexual assault.

The bottom line is that sex workers are people and deserve to have their boundaries respected. Sex becomes rape when it is not consensual, whether money is exchanged or not.

Brownmiller says she has a similar attitude toward domestic violence victims as she does toward rape victims: "If they can’t get out because they don’t want to reduce their living circumstances, or they don’t want to go, or they are passive people, then I am supposed to respect that. But I don’t. My feeling is 'Get out.'" But domestic abuse victims stay in their homes and relationships for many legitimate reasons. Sometimes, they have nowhere else to go. Oftentimes, their abusers manipulate them into believing that they are not being abused or that their situations will change. Those who are not domestic violence survivors themselves don't understand what it's like to be in that position and have no right to judge victims.

6. MYTH: All Feminists These Days Care About Is Sexual Assault on College Campuses

Brownmiller says she'd like campus activists to "extend your focus to the larger percentage of women and girls who are in danger of being raped. They are more important than the college kids." Earlier this year, LA Times columnist Meghan Daum made a similar argument, lamenting third-wave feminists' myopic focus on campus rape: "The campus assault meme could also be sparking conversations worth having about gender and power, and the overall state of women in the world." In response, Feministing's Dana Bolger argued that if you think the vision of feminists or anti-sexual-assault activists does not extend beyond college campuses, you're not paying attention:

Student survivors are engaged in work beyond their own campuses. They’re organizing for prison and fossil fuel divestment, working in domestic violence shelters, and getting Title IX ed into middle and high schools. They’re using civil rights law on their campuses in order to imagine new ways of responding to violence outside of them (and all without relying on a violent and unjust prison system to do it). And they’re thinking critically about their own complicity in violence abroad, about how to amplify and support the work that others are doing in their communities around the world.

And besides: There is no "more important" or "less important" when it comes to people who are in danger of or survivors of sexual assault. All victims and survivors deserve help and care.

More like this
25 Inspiring Quotes From Black Women To Celebrate Black History Month
By Kyli Rodriguez-Cayro and JR Thorpe
24 History-Making Black Women You Probably Didn't Learn About In School
By Ayana Lage and JR Thorpe
Twitter Is Identifying With Sally Field & Jane Fonda’s Friendship In New Viral Video
By Jake Viswanath
6 Organizations Fighting Police Brutality That You Can Support Right Now
By Syeda Khaula Saad and JR Thorpe
Get Even More From Bustle — Sign Up For The Newsletter
From hair trends to relationship advice, our daily newsletter has everything you need to sound like a person who’s on TikTok, even if you aren’t.