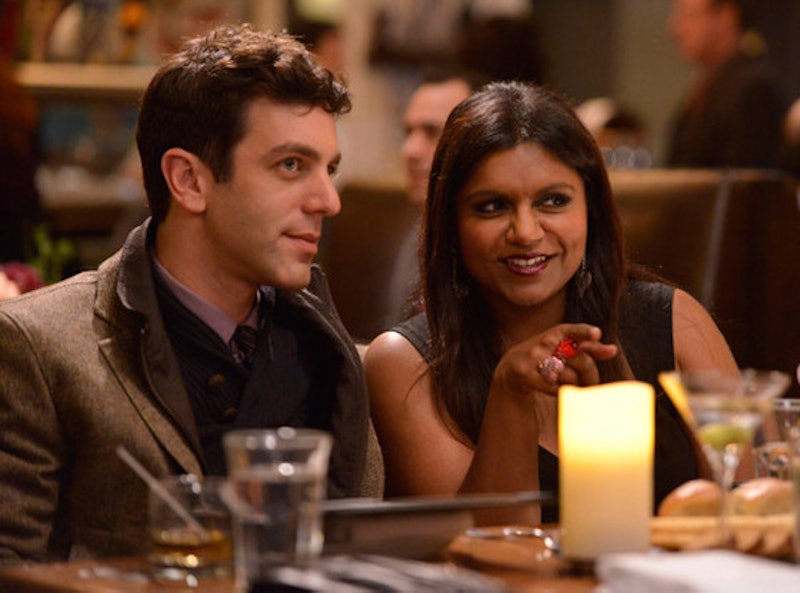 Obviously, any guy that approaches a date with a holier-than-thou attitude is an automatic douchebag. And if he takes to calling you thinks like "baby" and "sweetie" straight away, he might be someone who doesn't respect your womanhood. Same goes if you're dating another women: ladies can sometimes buy into the patriarchy too, don't be fooled by boobs and menstruation. These things do not an automatic feminist make. So if your keen eye is seeking a feminist to date, but you're aware that not everyone who believes in gender equality goes around brazenly declaring their allegiance, here are some signs your date is a feminist:

Firstly, a guy who calls his ex girlfriend "crazy" is a f*ckboy. If she genuinely has mental illness, he's totally un-empathetic and idiotic. If they just had a tumultuous relationship, he's also totally un-empathetic and idiotic. It takes two to tango, and defaulting to declaring a woman "crazy" is a too-easy way to belittle a woman's dynamic and nuanced relationship to someone else. It discounts every other facet of her personality and the influences of the relationship on her personality, and is an unfair assessment that promotes unhealthy gender stereotypes — because "crazy", in general use in equation with women, normally just means "emotional". Maybe she was mean, callous, manipulative, unpredictable or any other variety of descriptors that denote a bad person, but a blanket "crazy" is a gendered way of diminishing a woman's emotions.

2. They Accept You Trying To Pitch In On Paying

If you're with someone who shows offense, or is condescending when you offer to pay, or buy a round of drinks, this person might not believe in a woman's financial autonomy — or worse, might actually believe a little lady couldn't possibly handle the burden of paying her own way. Of course, when someone offers to buy you dinner, it's a lovely gesture that even the most staunch feminist will willingly accept, but being able to respond in kind is also a wonderful gesture. If you're with someone who's happy to let you get the next round at the bar, you likely have someone who values equality between genders in a relationship.

I mean, it should go without saying that someone who unconditionally agrees with anything Donald Trump has been saying in the media is probably not a feminist. Someone's politics will probably give you a good idea on where they fall on the feminist spectrum. While of course not all Republicans are misogynists and not all Democrats are passionate feminists, to some degree you can judge how feminist (in the modern sense) someone will be depending on how left or right their politics align.

4. They're Non-Judgmental And Actually Listen When You Talk

When you're talking about yourself and your life and you feel like the person listening is judging, or they're offering judgmental opinions, be wary. Especially when you're talking about things like your independence, from travel, to sex, to work to partying: if a man or even a woman seems to be judging your choices when it comes to your life, you might want to asses why they're doing it. It might be because they're just a general judgmental jerk, but it might also be because they're a complete misogynist. Do they applaud the same behavior in men? If so, they might have some anti-feminist ideas about how a woman should behave and you probably want to steer clear.

5. They're Impressed By Your Achievements

Anyone who isn't threatened by your achievements is probably feminist leaning. Any man or woman who tries to belittle you when you're explaining your professional, or any other, success, is definitely jealous, and maybe a little bit bigoted. They are definitely not a team player! If you're dating a dude, you don't want him to feel emasculated by your achievements, and the best way to ensure that is to ditch a date if he is. Because a real feminist understands that you're allowed to succeed too, and that gender equality doesn't make him any less of a man.

6. You Don't Ever Feel Uncomfortable With Something In The Conversation

Trust your instinct. If someone is dropping little hints that give you an uncomfortable feeling, like maybe they're actually not interested in equality between the sexes, don't ignore it. Obviously, not every case is going to be cut and dry, so you need to listen for cues that the other person is gender-positive. It's generally apparent pretty early in a relationship where someone falls on the feminist spectrum, and you'll notice it in the way they treat you and their opinions and comments on the world around you.

More like this
Hinge's New NFAQ Feature Is Demystifying Queer Dating
By Emma Carey
12 Ways You're Sabotaging Your Love Life
By Teresa Newsome and Lexi Inks
The Best Time To Date After A Breakup, According To Experts
By Bustle Editors
Expert Tips For Being On Top When You're Plus-Size
By Lexi Inks
Get Even More From Bustle — Sign Up For The Newsletter