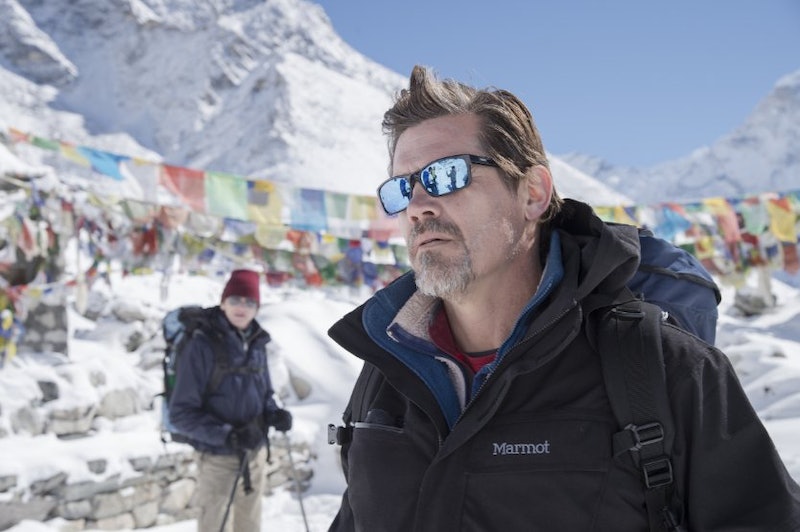 In 1996, writer and adventurer Jon Krakauer accompanied a group of mountaineers set to summit Mount Everest. The expedition was stranded by a sudden blizzard, and eight climbers died in the ascent and descent. He chronicled the tragedy in his book Into Thin Air: A Personal Account Of The Mt. Everest Disaster, which was released the following year. It was immediately snapped up for a made-for-television movie the same year called Into Thin Air: Death On Everest. Many survivors of the expedition published their own accounts of the tragedy, and it's been the subject of documentaries and reconstructions to determine what happened, and how. The new Jake Gyllenhaal and Josh Brolin-headlined film Everest, also starring Jason Clarke, Elizabeth Debicki, and John Hawkes, is yet another addition to the mythology of the Everest disaster. Is Everest based on Into Thin Air ?

Everest's director has quite vehemently denied Into Thin Air as inspiration for his film. Baltasar Kormákur told Entertainment Weekly that he "wasn't that interested in telling a story about a writer on a mountain." That's been done before, he added. Everest is inspired by multiple sources — Kormákur said that Krakauer's book is too one-sided, and he hoped to "humanize" all of the climbers involved in the disaster. The film isn't about laying blame or "creating a villain." And to that end, Kormákur used multiple sources to inform how he portrayed each of the climbers, their motivations, and their actions.

He began with Beck Weathers's memoir of the experience, Left for Dead. Weathers, played by Brolin in Everest, lost his nose and hands to the frigid conditions and brutal blizzard, and went nearly blind at the altitude due to a recent procedure on his eyes that affected his ability to see in the dark. That, and a scratched cornea, sidelined him from summiting the mountain. He spent a traumatic night in the open (the night that lost him parts of his limbs and face), and miraculously survived the ordeal. Left for Dead is one of a group of memoirs written by the survivors of the Everest disaster — Krakauer's Into Thin Air is another, as is Lou Kasischke's After the Wind. However, when Kormákur was initially approached about the project, the proposal didn't include the details of Into Thin Air. As Kormákur said, that story has been told.

But Kormákur told Entertainment Weekly that he was also consulted taped recordings from the day. "None of the books that have been written had access to these tapes," he told EW. This includes a transcription of expedition leader Rob Hall's last conversation with his wife Jan, according to Emanuelle Levy. Pieces of dialogue from those recorded conversations were folded into Everest, presenting these sources perhaps for the first time since the disaster. For the writers who documented their harrowing descent didn't have access to the recordings, according to Kormákur.

Kormákur also consulted the families of the deceased in reconstructing the events of Everest. He, Clarke, and Everest producer Tim Bevan held a listening session of the tapes with Hall's family and a couple of mountain officials who were on duty that day, he told EW. One of the film's producers, David Breashears, a cinematographer and mountaineer, was at Everest in 1996 filming his own documentary Everest . The documentary came out in IMAX a few years later, and producer Tim Bevan said that Breashears had access to some of the most valuable source materials on the disaster, according to Emanuelle Levy. He was brought on board for his experience with the mountain (he also wrote a memoir about climbing the behemoth mountain, called High Exposure, and he's scaled its peak no fewer than five times).

It might come as something of a surprise that Everest isn't based on Into Thin Air, especially considering the amount of press and success Krakauer has earned for his memoir. Jon Krakauer is still present as a character in the film (he was present on Rob Hall's expedition, after all), and is played by Michael Kelly of House of Cards fame. But his version of the events is just one perspective in the many that contributed to making Everest.

More like this
The Biggest Differences Between 'Bullet Train' & The Book It’s Based On
By Arya Roshanian
‘The Simpsons’ Will *Finally* Address How They “Predict The Future”
By Sam Ramsden
10 Must-Read New Books Out This Week
By K.W. Colyard
The Bestselling Novel 'The Doll Factory' Will Be Adapted Into Thrilling TV Series
By Catharina Cheung
Get Even More From Bustle — Sign Up For The Newsletter