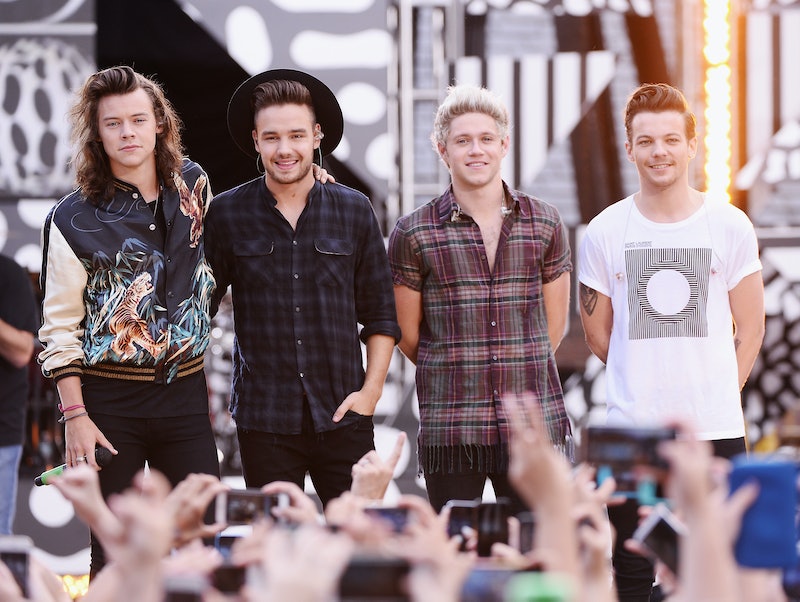 Good news for One Direction fans: Zayn Malik is back! (Just kidding... Too soon?) OK, OK. Let's try this again. One Direction just dropped the title of their fifth album: Made in the A.M. (cue: screaming). Although the official title release is exciting, it begs a serious question for fans: What does Made in the A.M. even mean? News of the title broke this morning, so it's safe to say hardcore Directioners are probably already making speculations. Can't blame them, though. What else are we supposed to do until the album drops on November 13?

We know that at least one of the album's tracks is "Infinity," but that doesn't give us many useful clues. That could mean anything, and, at first glance, "Infinity" and "Made in the A.M." don't seem to have any correlation. Seriously, One Direction, are you just trying to confuse us? Is that to distract us from the sad fact that you'll be taking a hiatus after this album drops? If so, it might be working. According to One Direction's twitter, you can pre-order the entire album right now, but don't get excited. No tracks are actually named except the already-released "Infinity" and "Drag Me Down."

So, even though the band hasn't officially commented on what the title might be referring to (yet), I think it's fair for us to make some educated guesses ourselves. Let's do this.

Guess what else is made in the a.m.? Bed head, aka the kind of hair that members of 1D pull of so effortlessly/fans swoon over.

2. Their Love of Breakfast

Breakfast is delicious and definitely made in the a.m. Honestly, there aren't enough albums dedicated to the most important meal of the day.

Their whole career thus far has been this fairytale, dream come true scenario that they are about to take a break from (i.e. wake up from). Now that the album is finally dropping, their hiatus feels real.

Most boy bands/pop bands come alive in the night time. But not One Direction, baby. The real party happens in the morning. You know, when the work gets done. Perhaps this is their way to tell everyone that they mean business.

6. How Much They've Grown

Let's look at the way their previous albums illustrate a certain timeline. Their first album was called Up All Night, their third Midnight Memories, and now their fifth is titled, Made in The A.M. Guys, hear me out. I think this is an analogy for growing up.

7. Or Maybe...They Just Literally Made the Album in The Morning

Could be, could be, but let's not get too crazy here.

The suspense is killing me. Is it November 13th yet?