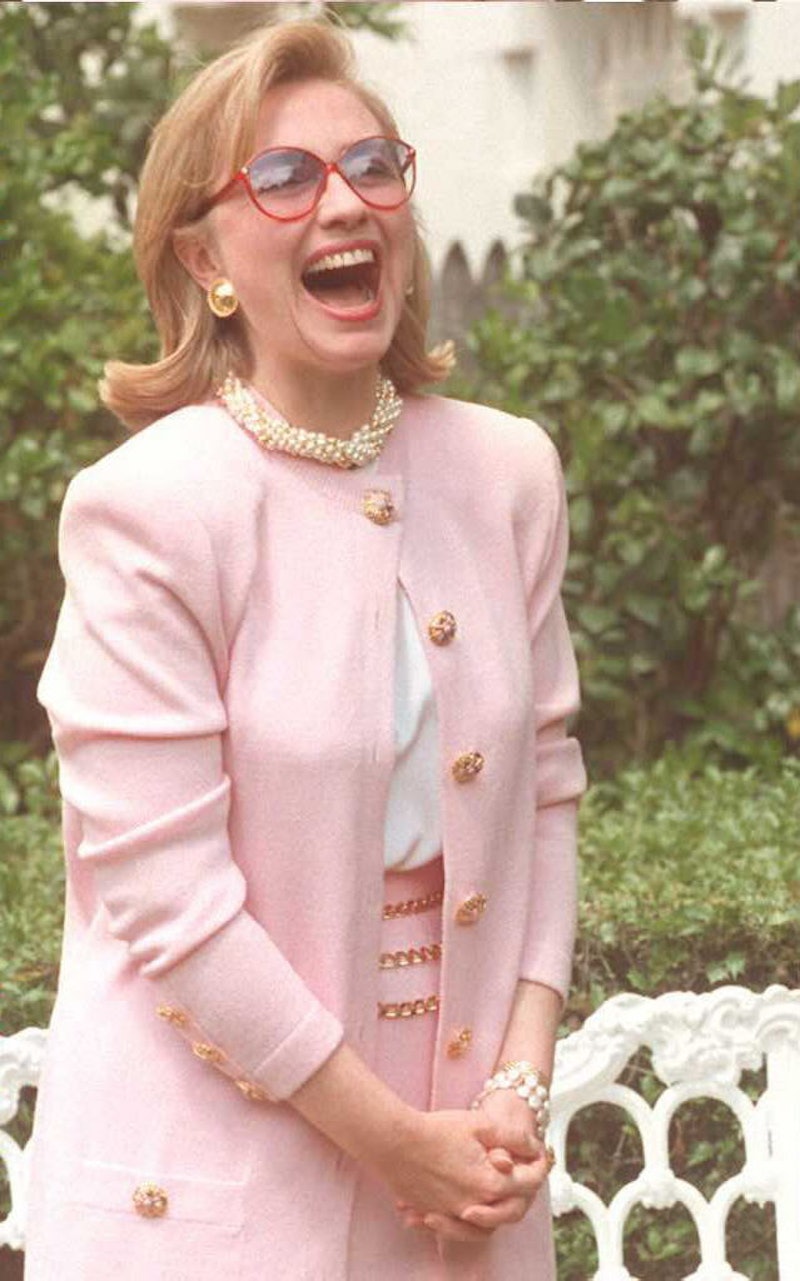 This Halloween season we'll be witnessing a gamut of costumes of the political persuasion, from punny to preposterous. If you're forgoing the opportunity to dress like "Sexy Donald Trump" this year and are considering instead something a little more inspired — and inspiring — like say, a Hillary Clinton Halloween costume, why not take it up a notch (or eight), and gather your friends for a fashionable historical retrospective? Here are eight ensembles for the ultimate group Halloween costume: Hillary Clinton through the years.

You and your friends can channel your inner-Hillary from the '60s through the '90s and into present-day with costumes capturing some of her most iconic fashion moments. Which Hillary are you? The studious and superlatively hip young political science scholar? Or perhaps you're more polished First Lady in an unapologetically '90s powder pink silhouette perfected with pearls? Do you wear your sunglasses indoors, on planes, or have a resting face that suggests you would? Well grab your mobile (bonus points for Blackberry), and get ready for Madam Secretary vibes. Scroll below to see which stylish moment has your vote. Here are eight times the presidential nominee's look was everything, and the eight outfit inspirations to make them happen for the most Democratically darling group Halloween costume ever.

Before racking up her long list of post-graduate accomplishments, Clinton was a political science major at Wellesley College, becoming the school's first student commencement speaker upon graduating in 1969. The active student leader was pretty hip with bold pants, already demonstrating her effortless yet studious take on sartorial sensibilities.

Earn an A+ reenacting the star student's look here with iconic striped pants that read a little work-hard-play-hard, and a no-frills white button-down. Top it off with a low-key but not lazy half-up knot for study session style, and don't forget your grandpa glasses. The minimalistic black banded slides underscore the semi-casual cool. Carry around a political science textbook or some history reading for extra credit.

It's no easy feat making a headband and buffalo plaid pairing look this polished. But by this time, the First Lady Of Arkansas had earned her J.D. from Yale Law School, had become the first female partner at her law firm, and was twice listed as one of the hundred most influential lawyers in America by The National Law Journal. So coffeehouse stylings probably seemed like a piece of cake.

Layer a red turtleneck with a buffalo plaid blazer or sweater and gold statement jewelry for an autumn-appropriate look. A wide headband and red lipstick in a shade to match bring it all together.

Here, Hillary Clinton is a campaign trail vision in crisp white, standing beside her husband Bill. Even without the juxtaposition, it's evident that life in the limelight is "no sweat" for the future First Lady who has already mastered keeping her cool.

Epitomize Clinton's White House worthy style with a belted white cotton dress, gold bangles and earrings, and a matching headband to keep your '90s hair tame no matter the weather. Show your support with a vintage Clinton-Gore pin, or add a touch of patriotic flare with an American flag brooch.

For inaugural balls one and two, Clinton was all sparkles. For her first in 1993, she exuded midnight glamour in a floor-length gown showcasing favored formal fabrications — silk, tulle, and lace illusion sleeves.

Recreate the First Lady's first inaugural gown with a long-sleeved lace dress (bonus points if it sparkles like Clinton's). Add length and volume with a skirt (best if tulle), and belt the ensemble with something jeweled. Don oversized costume jewelry and embellished pumps in a satin finish, and you're ready for a night of celebration.

The First Lady is all smiles at the opening of an art exhibit at the White House in 1995, looking lovely in a '90s pastel ensemble paired with red framed glasses and a matching lip.

Pair a powder pink blazer and skirt with layers of pearls and thin-rimmed sunglasses that add a pop of red. Aim for '90s construction of large shoulders and oversized gold buttons to really drive the look home.

In 1997, Clinton received the Grammy Award for Best Spoken Word Album for the audio recording of her New York Times Bestseller "It Takes A Village: And Other Lessons Children Teach Us." She looked like a winner in a floor length piece that was just the right balance of sophistication and show with demure olive silk on the bottom and golden brocade on top.

What's really important here is the volume of the hair, so make sure you tease, lift, and set with a strong hairspray. Consider also an olive skirt in a satin finish paired with a sequined gold top for the full winning effect.

This photo taken of Clinton in 2011 on board a military C-17 Globemaster III while wearing sunglasses and holding her Blackberry went viral, and inspired the Tumblr and Twitter titled "Texts From Hillary." The memorable first post paired a photo of Obama texting with the caption, "Hey Hil, Whatchu doing?" with her dry response, "Running the world."

Once you've practiced and perfected the cool IDGAF expression the U.S. Secretary of State has mastered in the iconic photo, all you need to complete the look is a pair of large dark shades, a matching brown blazer, and a cell phone (Blackberry preferred). Accessorize like Clinton with pops of turquoise jewelry and a brooch, and finish it off with a no-nonsense red lip.

Sartorially, Clinton has become known for her penchant for pantsuits, particularly in perfectly executed monochrome ensembles. Here, she's in Democratic blue from head to toe at her presidential campaign launch at Four Freedoms Park on Roosevelt Island in New York City on June 13, 2015.

Follow in the footsteps of the self-described "pantsuit aficionado," pick your favorite color, and then run with it. Find said color in a blazer, slacks, and shirt, and wear together for a homogeneously hued power suit.