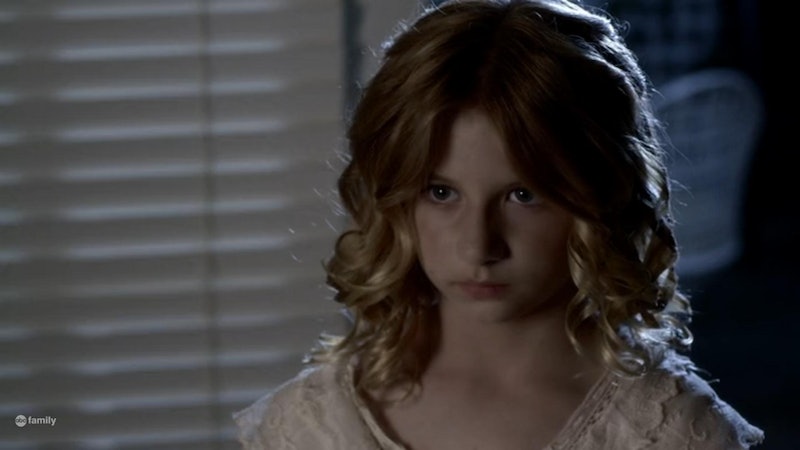 Season 6A of Pretty Little Liars was subtitled the "Summer of Answers" for a reason. Not only did we finally find out Big A's true identity (CeCe Drake, what's good?) but we also learned what really happened to Toby's mom, who actually hit Bethany with a rock, and who was helping CeCe as Black Widow. There is one thing that we didn't find out this season, though — and that's who on Pretty Little Liars has a twin. Rumors of a potential twin on the series have been swirling for a long time now — the show has made plenty of allusions to the concept with the duplicate masks, red coats, and other "mirror images" — but now we finally have confirmation that one exists: I. Marlene King recently tweeted that we find out who has a twin soon. But, who is it? Personally, my money is that it's Bethany with the twin — but that's not even the craziest part of this theory. I also think that we may have already met Bethany's twin... or, at least, her ghost.

In the Halloween episode "The First Secret," Ali told Hanna and her babysitting charge a story about twin sisters, one of whom fatally stabs the other after a fight over their dolls. In the Season 3 Halloween episode titled "This Is A Dark Ride," one of the little girls from Ali's story — whom is played by one of the same twin actresses — appears to Hanna's mother Ashley as a ghost. The ghost girl even talks about fighting with her "mean" sister — as in, the one who murdered her over a doll. Instead of meeting a twin we've never seen, perhaps the Season 6B will finally explain just who those twins were, thus giving us a more extensive backstory on a fairly mysterious character.

There's a huge red flag in the Halloween story that should give any Pretty Little Liars fan pause, though. Ali mentions in her story that the little girl who killed her own sister was sent to a "home from the criminally insane" by her parents. Could this home be Radley Sanitarium? It certainly seems likely.

We only know of two blondes who spent time in Radley Sanitarium: CeCe, and Bethany. Now that we know CeCe's full story, it seems that Bethany is the person we can most easily point the finger at. Consider what CeCe told us about Bethany: Bethany had an explosive personality, and pushed Toby's mother off the roof without any remorse. That certainly seems like the kind of person who would plunge a knife into her sister's chest without a second thought.

The other reason why I'm betting that the ghost girl is Bethany's sister? It would be the perfect way to tie up the Big A story neatly. The Halloween ghosts were a big question mark in the early seasons of Pretty Little Liars, as was the identity of Big A and the theory that Ali may have a secret sibling out in the world. Learning that Bethany was the girl who killed her sister and thus was sent to Radley for it would explain so many of our questions — and, considering the show is moving on to bigger mysteries, it's time they gave us that answer.