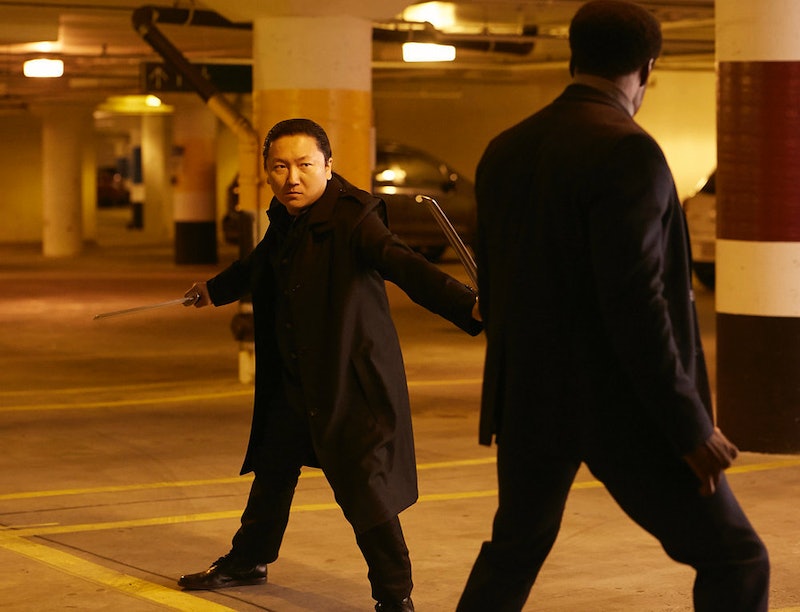 Although the news that NBC's reboot of their formerly popular Heroes wouldn't feature many of the original characters came as a disappointment to many fans, the decision is actually very much in keeping with the spirit of the show. In fact, the original plan was for Heroes to be less serialized, and more like the anthology shows that have become so popular today. "I thought Heroes was going to have an ever-shifting cast," creator Tim Kring told E! Online way back in 2007 between the first and second seasons of the show, "but the cast hit in such big ways that now the challenge is to figure out how to use them all and still fold in a couple of new people." For Heroes Reborn, Kring told Entertainment Weekly that, "The vast, vast majority are brand new characters," and that he would only be bringing back original characters as "a tether to the original world." So which of those original characters can we expect to see in the course of the 13-episode limited series?

We already know that Jack Coleman's Noah Bennet — aka HRG, the Man with the Horn-Rimmed Glasses — will be the only returning character in Reborn's main cast, alongside franchise newcomers like Zachary Levi (Chuck) and Ryan Guzman (Pretty Little Liars). But he's far from the only familiar face we'll be seeing. At least six more characters from the original series will be making appearances that we know of... and who knows how many more surprises Kring has in store for us? In fact, the only glaring omission from the lineup of returning cast members is Hayden Panettiere as cheerleader Claire Bennet. Kring said at the TCA Summer press tour that [spoiler alert!] her character is killed a year before the main events of the reboot.

Here's who will be popping by for a visit:

The series' most beloved character will be back — although he looks to have matured a lot since his carefree, Times-Square-teleporting days. He was last seen saving a bunch of people by teleporting them away from Samuel Sullivan's evil carnival, rendering the villain powerless and allowing Peter to defeat him in combat. "I’m excited to return to my Heroes roots," the actor said in a statement when news of his involvement broke. "Hiro Nakamura was such an inspirational role to play, and I’m hoping the fans will enjoy seeing him back on TV."

Grunberg may be a J.J. Abrams regular, having appeared in just about every one of the director/producer's projects; so it's ironic that his most high-profile role to date was as the telepathic cop in Heroes, which was largely seen as a rival to Abrams' own Lost at the time. In the Season 4 finale, Parkman was nearly killed by cloning henchman Eli before being saved by Peter and Sylar; he then managed to brainwash Eli into turning against Samuel, leading to the antagonist's downfall. Entertainment Weekly reported that he'll appear in Heroes Reborn as a guest star.

Despite remaining in the main cast for all four seasons of the original run, Ramamurthy was little more than a glorified guest star in the final season, appearing in a mere eight out of the 18 episodes. His character, geneticist Mohinder, had been on quite the ride, going from unpowered, "normal" human to super-powered spider-human thanks to a self-made injection. Last we saw him, a few episodes before the Season 4 finale, he was living happily in India with his girlfriend, Mira. What will pull Mohinder back into the fray?

Although Gray-Cabey's Micah was only a main character in the show's first two seasons, he popped up again in three episodes of Season 3, where it was revealed that he was the mysterious figure "Rebel," who was helping powered people hide from the government. He last appeared in the episode "I Am Sylar," helping the eponymous anti-hero come to grips with his identity. It will be interesting to learn what Micah has been up to in the meantime, since he's the returning character viewers haven't seen in the longest time. (Oh and by the way, this is what Gray-Cabey looks like now.)

Merely a recurring character in the show's first two seasons, Rose became a full-fledged series regular in the final two years, as Peter's and Nathan's mother became more and more integral to the plot. Interestingly, Rose's promotion coincided with the revelation that her character, presumed to be a normal human, actually possessed the gift of precognitive dreaming. Most of Season 4 saw Angela dealing with Nathan's passing — and the fact that she'd implanted her dead son's thoughts and memories into Sylar's brain. We'll have to see how important Angela is to Heroes Reborn when Rose returns.

Perennial supporting player Jean-Louis' quiet henchman (who was also known as The Haitian) mostly worked for Noah Bennet, wiping people's memories and dampening other heroes' abilities. He recurred throughout all four seasons, although he was never a part of the main cast. The last time we saw him, he was helping Peter apprehend Sylar about halfway through Season 4. Interestingly, Jean-Louis teased that René and his former boss, Noah, may not be on the same side anymore when the show returns for Reborn...

Will anyone else from Heroes' past make a surprise appearance? We'll have to watch all 13 episodes of Reborn to find out.

More like this
“The Door Is Always Open” For Another 'Breaking Bad' Spin-Off, Says AMC Boss
By El Hunt
Neil Patrick Harris Will Play 'Doctor Who's “Greatest Enemy” Yet
By El Hunt
Regé-Jean Page Spoke Out On His Rumoured 'Bridgerton' Return
By El Hunt and Maxine Harrison
The 'Hocus Pocus' Sequel Finally Has A Release Date & It Makes Total Sense
By Shannon Barbour and Radhika Menon
Get Even More From Bustle — Sign Up For The Newsletter