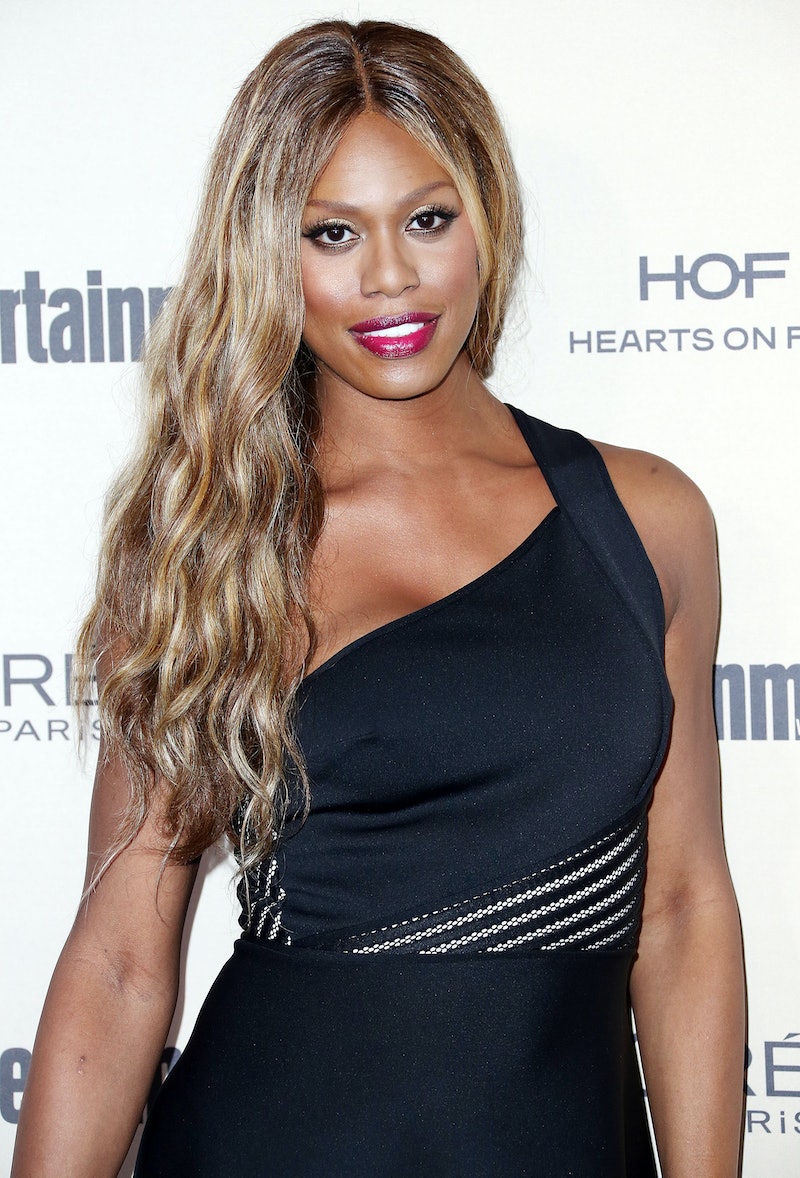 It's a secret to no one that Orange Is the New Black star Laverne Cox is a body positivity queen. Her mere existence as a trans person of color in the media makes her incredibly important for inspiring self-love in a vast array of people. The confident way she carries herself as she speaks about the causes she cares so deeply about is helpful not only to trans people of color, but to all identities. Regardless of our level of marginalization, we can all benefit from her body pos messages. Her calm assuredness and commitment to advocacy make her a breath of fresh air for anyone who needs the slightest bit of inspiration in the self-love department.

Cox arguably inhabits and promotes areas of body positivity that mostly concern race and gender. She stresses the importance of pronouns and correct terminology usage, as well as maintaining that trans women don't have to look like her or perform femininity in a typical way to be beautiful. She supports her trans sisters, and acknowledges her own privilege as a passing woman with access to expensive beauty routines.

Cox has also discussed the need for the inclusion of trans individuals in our media representation, and uses her own identity and visibility in the media to try to advance that cause. She also unapologetically loves herself, and publicly embraces her body across all platforms, like Allure magazine (for which she posed nude earlier this year).

Most importantly, Cox is brave enough to discuss all of these things openly, thus becoming one of the greatest and most intersectional role models for body positivity available to us via mass media. Here are just seven ways Cox has been body positive over the years.

1. Acknowledging That Passing Isn't Everything

According to Page Six, Cox gave a beautiful speech at The Daily Front Row's Fashion Media Awards on September 10 as she accepted an award from Maybelline. She discussed her hashtag #TransIsBeautiful and how devastating it was for her to be identified as masculine or trans by strangers during her transition. Although people calling you out on the street for your identity — or for anything — is wrong, she shared what she learned from it nonetheless.

“It took me years to internalize that someone could look at me and tell that I am transgender. That is not only OK, that is beautiful. Trans is beautiful. All the things that make me uniquely and beautifully trans, my big hands, my big feet, my wide shoulders, my deep voice, are beautiful.”

In a world where trans people feel incredible pressure to pass as the gender with which they identify, Cox debunks this requirement despite her own passing privilege, and leads the way for new definitions of beauty (which in the past, have never included trans people).

2. Embracing Her Height, And Helping Others Do The Same

Cox is a pretty tall woman, often towering over other celebrity friends she's seen with on the red carpet. Of course, being a tall girl can be tough. Gender and beauty expectations tell us that women should be short and petite. However, feminine people come in all different sizes and shouldn't be made to feel less attractive because of their height (or anything else for that matter).

Cox embraces her height, and is secure enough to rock high heels regardless (something often considered a no-no for tall gals). Breaking fashion "rules" and inspiring others to tap into their own body positivity are part of what make Cox so great. For example, she recently interacted with a fan on Twitter who was insecure about her height.

In 2014, Cox was interviewed on CBS This Morning to discuss her role on Orange Is the New Black and her current projects. However, classic of ignorant folks and more classic of a pre-Caitlyn Jenner era, the questions directed at Cox ended up focusing on her trans identity. The interviewer, Gayle King, referred to Cox as having been "born a boy," which Cox quickly corrected. Here's how it went down, according to Huffington Post:

King: "Let's let people know about you, Laverne, because you were born a boy but..."

Being misgendered or having your gender deeply misunderstood, especially in front of millions of viewers, is probably not going to conjure up any kind of body positive feelings. However, Cox stayed composed while also refusing to accept transphobic language by respectfully correcting it. It's endlessly difficult to have to educate others about your identity, but Cox's bravery in doing so makes the world a more comfortable place for all queer and trans bodies.

4. Showing Support For Other Trans Women In The Media

Caitlyn Jenner has received (and continues to receive) a lot of criticism pertaining to what her image is really doing for the trans community. As one of the only trans women in the limelight and as someone who is trying to use her platform to educate and make change, she has been critiqued for her lack of knowledge about queer issues as well as her arguably white-washed message.

However, Cox, who is incredibly intersectional in her own identity, activism, and beliefs, acknowledges Jenner's importance in the trans community anyway. While Jenner's whiteness and access to beauty make her more privileged than many other trans people, Cox still maintains support of Jenner and validates her visibility. Jenner may represent only a very small portion of the trans community, but, as Cox has said in the past, diverse media representation of trans individuals is necessary in fixing this problem (rather than demanding one trans person embody the experiences of all trans people). Jenner's kind of visibility may not be ideal for many, but it's certainly a start. I mean, she has Queen Laverne's blessing, so that must count for something.

Cox is also a fan of I Am Cait, and has seen every episode of the show. According to E! Online, she admires the show as much as Jenner for helping elevate the stories of trans people.

5. Bringing Awareness To The Idea Of Aesthetic Beauty As Defined By A Cis-Normative Society

Cox acknowledges that she has huge advantage over many other trans individuals thanks to her visibility, economic status, and passing privilege. She has also analyzed how people's positive reactions to trans women in the limelight — like Caitlyn Jenner and herself — are tied to their looking beautiful or glamorous. However, in a Tumblr post from June 2 (when the Caitlyn Jenner Vanity Fair cover was unveiled), Cox discussed how these conversations perpetuate highly cis-normative standards for how trans people should look. Not only do many trans women not have the ability to look as flawless as Cox and Jenner, but there are a number of trans people who just want to look like themselves, regardless of these standards. She wrote:

"[...] There are many trans folks because of genetics and/or lack of material access who will never be able to embody these standards. More importantly, many trans folks don’t want to embody them and we shouldn’t have to to be seen as ourselves and respected as ourselves. It is important to note that these standards are also informed by race, class, and ability among other intersections."

Leaving room for different people's interpretations of "masculinity" and "femininity" is an incredibly body pos move for gender fluid and trans individuals.

Cox posed naked for Allure's Nude Issue in April 2015, after much trepidation, because she saw it as a historical (and possibly once in a lifetime) opportunity to inspire body pos thoughts in other trans women of color. She said in an interview with Allure:

"Black women are not often told that we're beautiful unless we align with certain standards. Trans women certainly are not told we're beautiful. Seeing a black transgender woman embracing and loving everything about herself might be inspiring to some other folks. There's beauty in the things we think are imperfect. That sounds very cliché, but it's true."

Of course, Cox did it for herself as well in order to further embrace her nude body in a huge publication, as one of the highest act of body positivity.

"I honestly just want to make myself happy most, and if other people like it, then that's great. If they don't, then I'm still happy."

Being a trans woman, a person of color, and a body positive human is bound to be super tough, and Cox has dealt with fighting to exist at this intersection every single day of her life. For many of us, she seems to possess some kind of superhuman strength that has allowed her not only to survive, but to use her platform for advocacy and change.

Cox frequently speaks out through interviews, speeches, and social media platforms about trans and black identities, and uses her own identity to educate others. Educating people about your own identity can be very exhausting, and even traumatic. However, Cox is so steadfast in her body positivity and desire to inspire feelings of self love in other individuals that she prevails through every frustrating conversation about gender.

Want more body positivity? Check out the video below, and be sure to subscribe to Bustle’s YouTube page for more self-love vibes.