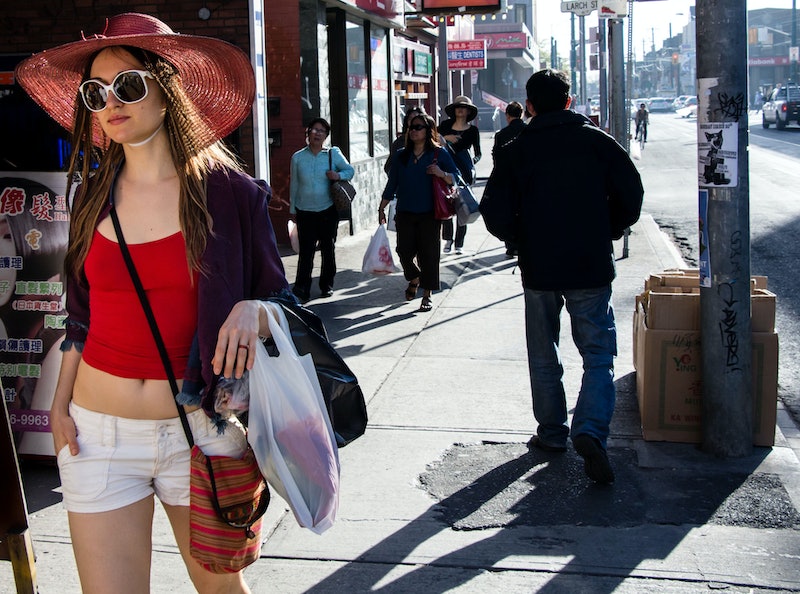 You don't have to be a Mean Girls fan to understand that the patriarchy has insidious ways of turning women against each other. Not every woman has access to education about the need for feminism, and so we all wonder the same thing at some point: How does a feminist deal with catty women? One of the fundamental tenets of women's rights is supporting other women, but that's difficult to do when someone is talking about you behind your back, throwing Beyonce-level shade, and generally doing everything in her power to be deliberately hurtful.

Worst of all, it's incredibly tempting to respond to cattiness with subtle digs of your own. In a culture of "blink and you miss it" female interaction onscreen, the few female friendships portrayed in the media are all too frequently reduced to frenemies and former best friends-turned rivals. For every Leslie Knope and Ann Perkins, there are dozens of Blair Waldorfs and Serena van der Woodsens telling women that we should view one another as the enemy, even if we genuinely like each other.

This isn't to say we should take our cues from TV shows and movies, but onscreen representation of female friendships are indicative of a larger trend in the cultural narrative of our relationships. Women are taught to compete against each other for, well, everything: Grades, jobs, motherhood, and above all, men. It's easy to see why we end up catty toward one another; we feel like we're in constant competition. The hard part comes in how to react without compromising feminist ideals.

Before we begin, it should be noted that although this article deals with catty women, men can be just as catty — but when they do it, it's just called getting ahead. That doesn't make it OK, though, so these tactics? They can be used by anyone in response to any form of cattiness.

Whether it's a comment about your appearance, your work performance, or any number of topics, it's tempting to respond to negativity with negativity. When this happens, remember what your kindergarten teacher told you back in the day: Don't be a dick. Also, treat others how you want to be treated; being catty back at her is just going to perpetuate the cycle.

If someone is spending the time and energy to try and make you feel bad, the best way to irritate them to no end is ignoring them — it worked when you were five, and it works when you're 25. Besides, one of the great things about being a feminist is realizing you don't owe anyone explanations for your decisions. So what if she doesn't like that you dyed your hair pink? You're the one that's getting all the compliments.

There's a fine line between calling someone out and getting sucked in to the drama, but if you can find a way, go for it. The trick is to be as direct as possible without being negative. Instead of busting in like Gwen Stefani in the above GIF, just say that you've noticed her attitude and need to resolve it. Plus, you have the element of surprise: Women are taught to silence themselves rather than communicate, so she won't be expecting a confrontation.

As much as some of us want to fight back, others would rather cut other women some slack. It's a great intention, but don't let anyone walk all over you. Again, one of the great things about feminism is knowing your own worth.

5. Hate The Patriarchy, Not The Lady

Don't give anyone a pass to steamroll over your fragile self-esteem, but it's also important to remember the factors going into cattiness. Our male-dominated world pits women against each other, and in all likelihood that's why she feels the need to assert her dominance over you, so to speak.

That being said, some people really are just jerks. It's up to you to figure out which kind you're dealing with.

6. Remember The Importance of Sisterhood

In the words of High School Musical, we're all in this together. In my experience, all the energy that goes into hating someone isn't worth it — instead, try focusing on building healthy relationships with other women. We're pretty great.