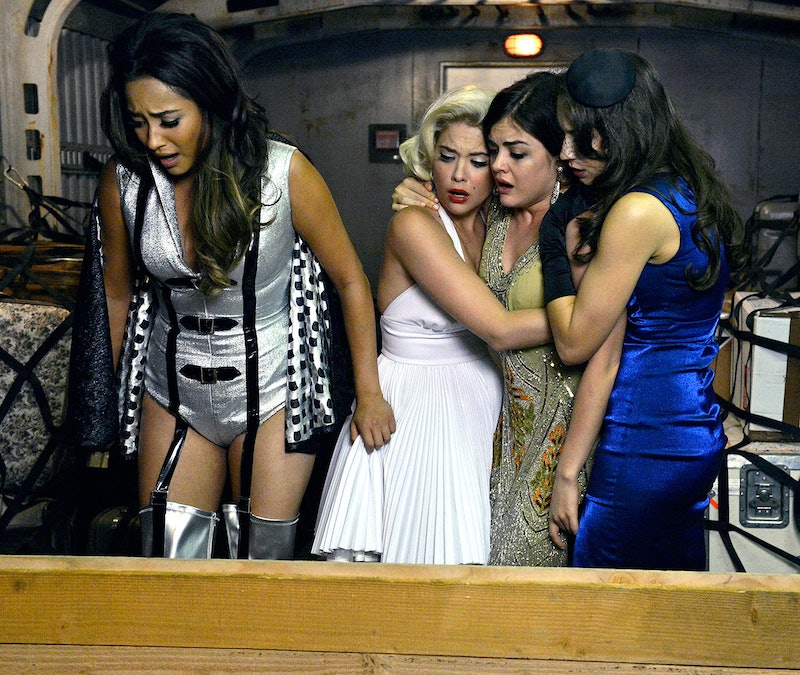 True television show commitment isn't about the hours you put in watching the TV show )though, yes, that's important as well) — it's about how willing you are to incorporate it into your life. Case in point: What are you doing for Halloween? If the answer is "throwing a Pretty Little Liars-themed Halloween party," then congratulations, you are officially a PLL superfan. I mean, honestly, what better way to lament the fact that we won't be getting a PLL Halloween themed episode this year than to throw a party in its honor?

I know you've all been ruminating about the questions PLL left for its fans after the Season 6A finale. I know you're concerned about the emotional well being of the girls, and where they will be in five years time, after the jump. I also know that what you want now, more than ever, is for the hiatus to just be over so your questions and concerns can be soothed. Unfortunately only the PLL gods — and by PLL gods, I mean I. Marlene King — can make this happen for you. So to ease the pain that the hiatus has brought upon us all, let's regale the idea of the most epic, most badass Pretty Little Liars Halloween celebration ever. In other words: instead of focusing on all the plot holes and unfinished business of PLL, let's pArty instead. (See what I did there? Guess whose clever now, A?)

This will be the easiest aspect of your party planning, because after six (and a half) seasons of this show, you know what a good, terrifying note from A looks like. Make it cryptic. Sign it "A." Boom. Done. How easy was that? If you're feeling unoriginal, just appropriate one of the following lines from the actual A:

3. "You still have something that belongs to me. (Insert items you still need for the party.) Bring it, or one of you leaves in a body bag. – A"

Dressing up like the liars is much too simplistic for you — and so is the copout of making everyone wear black hoodies. Instead, dress up as a liar from one of the Halloween episodes. For instance, instead of Marilyn Monroe, you are Hanna Marin as Marilyn Monroe. See what I mean?

Provide Food So Good It's ScAry

Any of the following would be appropriate choices:

4. The infamous pig cupcakes from Season 1, Episode 13. There are even tutorials on how to make these.

You will need to cover your house in creepy dolls. Be liberal with your use of cobwebs, and have a heavy hand with the crow imagery. We all know the latter means doom — and that the more doom, the better.

While the theme song on repeat would please most diehard fans of the show, not everyone is going to be down with hearing that all night. Instead, get your hands on a copy of the show's soundtrack.

PlAy Your Own Version of A Murder Mystery PArty

This involves some pre-planning, but basically everyone who walks in the door gets assigned a role, and one person is assigned the role of "A." Throughout the evening, the rest of the guests have to figure out who that is. (Pro tip: try not to invite anyone named Alison, as this could get very confusing.)