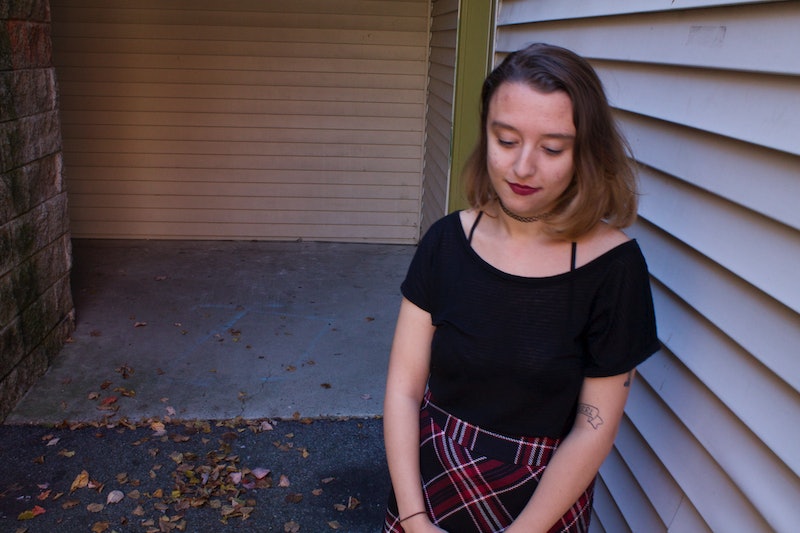 When you're trying to pursue self love, body positivity is an essential part of the journey. It's a valuable tool, one often used in plus-size circles, gender non-conforming/trans communities, and other groups of people that are marginalized and made to feel less beautiful about themselves by society and the media. Sometimes things happen to our bodies — sometimes because of these marginalized identities we inhabit — and it's hard for us to look at ourselves the same way afterwards. That's when body positivity becomes crucial.

I have explored the topic of body positivity in the past as it pertains to my gender identity, skin disorders, and in learning to love my more jiggly bits. However, my experience with trauma to my body is one of the things that has shaped my body conversation the most, as well as my relationship with sex. Abuse, trauma, and sexual assault are very physical manifestations of the ways in which our patriarchal society can make us feel powerless in our own skin. And all of these can contribute vastly to a general feeling of shame, making it difficult to maintain the same connection with and trust for your body, especially in a sexual context. I can attest to this personally, because two years ago, a person I thought I knew violated my trust and sexually assaulted me.

It's been difficult for me to come to terms with what I went through, and I hadn't told anyone in my life about it until recently. I was convinced that since my abuser and I were in a (sort of) relationship and had previously had consensual sex, what had happened between us that day was not as bad as it felt. I repressed all of the shock my body had absorbed during my assault, stuffing it far back into the recesses of my mind. After my assault, I stopped dating and I ignored my sexual body, my naked body. And I refused to think about how the events of that day had caused this change.

But as time went on and I developed a more accurate definition of "consent," the total absence of consent in the situation revealed a harsh reality for me. Not only was there an absence of affirmative consent (since you need an enthusiastic "yes" for a sexual encounter to be considered completely consensual) — I had literally said "no" and "I don't want to" to my controlling partner multiple times.

Still, I felt that "assault" was a strong word for something that didn't involve penetration. Since I managed to fight him off of me before things went that far, does that mean it was attempted rape and not actual assault? All these questions buzzed in my head. My mind raced with thoughts that didn't make much sense — thoughts that, as a feminist, I would immediately put to rest with some good 'ol logic if my friends had said them. Because no matter how I wanted to frame what happened to me, our sexual encounter involved non-consensual touching and force, and so was most certainly assault. You don't need to be penetrated to be sexually assaulted, and everybody's traumatic experiences are different and equally valid. However, it took me some time to be able to say these things to myself with confidence. It's still hard to.

Exactly a year after my assault, I started dating my current partner, Skylar. Because they were the first person I had sex with since my abuser, it was then that I finally noticed the real impact that my assault had on me.

Our first make out session was dreamy, but pretty tame. But by the second or third intimate encounter with Skylar, I noticed something I didn't quite understand. Kissing went smoothly, but as soon as they pushed me onto my back, my whole body went rigid and I felt panicked. And it kept happening like this. Skylar was so lovely in going slow and respecting my boundaries, but I didn't communicate my discomfort with sex to them immediately. I was annoyed with my body for reacting in such a way, blocking my ability to enjoy sex and to enjoy this person I felt I was really falling for.

As our intimacy escalated, I found myself getting more and more triggered. Sometimes it was the weight of their body on my own that would make me disassociate. Sometimes it was the location, which was usually my dorm bed (a piece of furniture tied to traumatic memories). Sometimes I saw my abuser when I looked at Skylar during sex. So I would close my eyes or avoid eye contact with them, and pretend I wasn't in my body. I sometimes cried in the bathroom after sex from the stress of the flashback I had experienced, and the guilt I felt.

At first, I was angry with myself for this. But one night, after remembering the way I had run crying into the dorm's public bathroom after I was just assaulted, it suddenly became clear that I was perpetuating a cycle of anger toward myself in my reaction to the fear in my body. This was unkind and stunting my healing process.

As my feelings for Skylar quickly escalated, I didn't want there to be anything between us that went unsaid, anything that would sacrifice the health of our relationship. So one night, I told them. I told them where I go when we have sex, and what had happened to me the year before. I told them that I want so badly to connect during intimacy. Almost immediately after doing this, having sex became easier and more satisfying for me.

Knowing that they had knowledge of what I've been through, and their total commitment to helping me feel comfortable, safe and connected during sex, really helped me begin to heal. But most of all, my acknowledgment of my trauma — and the new kind of love I was showing my body, which didn't involve shrouding it in shame and mistrusting myself — changed the way in which I experienced the world. I became less and less triggered each time we had sex, and had my first orgasm with them after about a month of being together.

We still haven't managed to have vaginal sex, which I have spent a lot of time being hard on myself about — and it's hard for me to feel beautiful and body positive when I'm beating myself up over not being able to experience penetration during sex. I've gotten upset about my body's inability to calm down enough for it to not seem like a scary thing. But I've been placing special attention on being patient with the process of recovering from trauma, and loving my body for what it can do.

My body delivers me powerful orgasms and can move in all sorts of ways. It can contort into various yogic positions. It has hiked the Himalayas, seen the castles of Scotland, and made love countless times to my life partner. It has been through illness, grief, emotional abuse, trauma, anxiety attacks, and it still survives. It is brave and beautiful and safe. Sometimes, my mind brings me back to my trauma body, a body that I once hated and wished to have forgotten. But I try to embrace the fear that my body sometimes expresses, as it relearns that the world is indeed a safe place. I know now that I don't want to shame my body's reaction into hiding because of false expectations I'm placing onto it. Healing takes time, and I have to give my body credit for all the progress we've made over the past couple of years.

I have moments of insecurity, moments where I don't want to see myself naked, moments when I don't think I'm sexually worthy of my partner. But when I stop to admire my naked body in the mirror (or in the bathtub), or whenever I have great flashback-free sex with my partner (which I'm happy to report is, like, all the time now), I'm reminded that my body is beautiful and worthy of my admiration, care, and the love of others. And even when I sometimes need to stop having sex because of a flashback, I am patient with myself as I validate and soothe my body's reaction. It's hard sometimes, but I trust the journey I've embarked on in loving my post-traumatic body. And trust doesn't come easily.