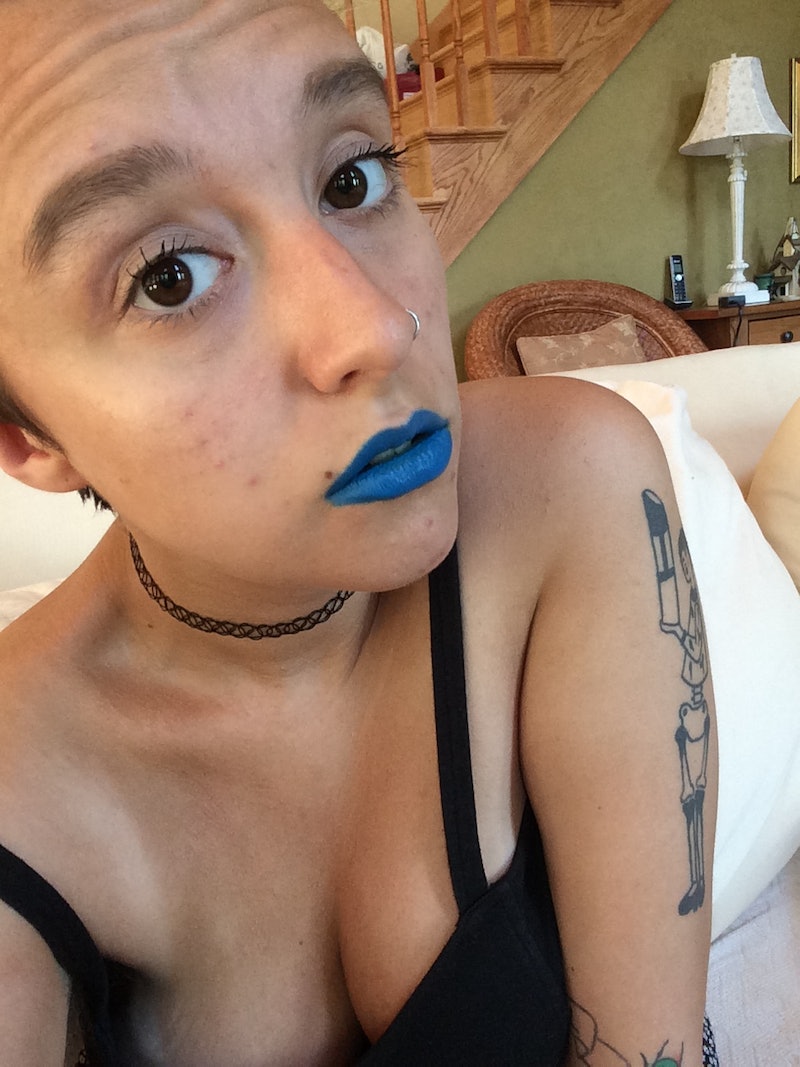 In recent years, the body positivity movement has been inarguably important in helping people grow to accept their bodies (especially those whose bodies have been marginalized for not fitting into conventional beauty standards), whilst calling for representation in the fashion and beauty industries as a whole. As most of us know, body positivity is about more than plus size bodies (although size acceptance is a hugely crucial part of the movement), which means body posi efforts extend to everyone — including those who are not thin, straight, cis, able, or white, arguably the greatest conception of "beauty" presented by the media.

Gender has clearly always played a role in the body positive conversation, considering body shaming is seemingly more directed at women. However, people identifying with genders that aren't cis — like trans, non-binary, genderqueer, or intersex — are hugely underrepresented. From my experience, non-binary and genderqueer individuals are entirely erased when gendered pronouns and language leave them harshly excluded from not only the sartorial world, but from the conversation about body positivity in the day to day.

As someone who identifies as genderqueer, I sometimes feel uneasy in body positive discussions. I try to overlook the gendered language in the "woman" and "she" dominated conversation because I don't identify as such and instead focus on the body positive conversation surrounding me. The women's empowerment is so important (and something I feel endlessly passionate about), and I can relate to many concerns about feminine beauty as a person who was assigned female at birth and definitely passes as a woman. However, I feel out of place and excluded when I don't hear my own pronouns (I prefer they/them/their), or when my identity isn't being taken into account during these discussions.

The thing is, there are thousands of us — and I'm willing to bet that the majority of us could benefit from queering up the body positivity movement a bit more. Here are just some of the things we can be addressing in our genderqueer body pos quest to greatness.

1. Be Considerate Of What Those Around You Perceive As Compliments/Insults

Just as you would with plus size friends or friends subverting fashion "rules," give body positive compliments that aren't solely based on physical appearance or limited to a certain gender. Bringing attention to the physical aspects of a person can easily become problematic based on where your friend is on their own journey to body positivity.

There are a number of non-binary and trans people who do not feel totally at peace with the way their bodies are often perceived as indicators of a gender identity they don't belong to. Additionally, many trans people deal with body dysphoria or extreme distress caused by a "mismatch between sex and gender identity" (according to the National Health Service).

Certain comments about appearance that are filled with good intentions could potentially trigger body negative attitudes and body disassociation. For example, complimenting a masculine part of someone's body when that person identifies as female or presents femininely can make them feel self-conscious about their gender presentation, and vice versa. Avoiding complimenting parts of the body that can be considered gendered, like breasts or beefy pectorals, can also be helpful. And maybe don't call a masculine or masculine-presenting person "pretty" (personally, I hate this).

However, it's different for every individual. I love when my friends and partner, who are tuned in to my gender fluidity and when I'm feeling more masc of femme, say things like "you look like a hot boy" when I'm presenting masculinely. It's very validating for me to hear compliments that align with the way I'm feeling and presenting each day.

2. Considering The Issue Of The "Real" Woman For Queer Identities

In many typical and often body-negative conversations, there is a little reminder of what makes someone a "real" woman. Whether that pertains to her sex life, her anatomy, the beauty routine she maintains, or her ever-present feminine fierceness, these expectations are oftentimes a tall order to fill. The reality is that not all women do or should add up to this limited idea of a "real" woman, whether because of their anatomy, habits, or preferences that differ from the "norm."

Rules of femininity already feel incredibly imposing to cis women, so it's clearly going to be a struggle for non-binary and trans people. You don't have to have a vagina to be a "real" woman, much like having a vagina doesn't necessarily mean you feel like a woman. It's important that we abolish strict ideas of what womanhood means, and acknowledge that the way every human uses and interprets femininity is valid. Real women have vaginas, penises, and any genitalia in between.

3. Redefining The Definition Of Femininity

Much of what we believe about fashion and beauty is divided by gender. It's important, then, to keep in mind that gender is subjective as well as constructed. Things that are typically perceived as feminine (like mascara or dresses) aren't only feminine or for people assigned female at birth. There are humans who don't feel that certain things like makeup and jewelry best reflect their femininity, choosing pieces that are more conventionally masculine while still identifying as feminine. Fashion and beauty are for everyone, however, and it's better for body positivity and basic human decency not to police the ways in which others dress or present.

Once we can begin getting over the idea that bodies don't always reflect gender, and that presentation doesn't always match gender identity (or your perception of someone's gender identity), queer people can feel more confident walking the streets without fear of being traumatized through mis-gendering.

4. Stopping With The Men's/Women's Department Thing

Shopping can be a body negative experience for anybody. With limited size ranges, dressing room stress, and the occasional body shaming friend, hitting the mall can be exhausting. From a gender point of view, the division of stores by the men's and women's departments generates lots of fear for non-binary or trans people who don't "pass" as the gender they identify with. For me, an AFAB and feminine-passing person, venturing into the men's department is always all kinds of stressful. Judgmental looks from fellow shoppers feel like they're burning a hole through my head as I try to browse through the button-ups.

Educating sales associates about body positivity and gender identity would be a great step in making the shopping experience a little less traumatizing for queer people. Additionally, it would be fantastic if retail stores could take a cue from Target's children's department, and abolish the splitting of their stores by binary gender identities. Leaving the defining of clothing up to the customer is the best and most body positive way to go.

As we know, bodies are not limited to cis men and cis women with clearly defined genitalia. There are those, like intersex people, who have ambiguous genitalia that doesn't exactly match the typical idea of a vagina or a penis. There are also people who alter their genitals to better fit the gender they identify with.

A person's genitalia is none of your business, and it's completely inappropriate to ask a queer person about theirs, only to use the answer or lack thereof to gender them. However, it's important to acknowledge the existence of these bodies, and be aware of the fact that every person's anatomy is beautiful and doesn't need to fit any societal category.

6. Realizing That Queer People Are Beautiful And Fashionable Too

Queer people, especially trans people and butch lesbians, are often portrayed as doing style "wrong." However, we know this isn't true and queers can be frontrunners of fashion trend-setting, too. Thanks to style websites and blogs like Qwear and The Handsome Butch, the idea that queer people and those subverting gendered ideas of fashion and beauty are fashionable and worth admiring has become a big deal.

Seeing other queer and gender-defying people being represented in the media makes me feel loads better about the importance of my own body and style. The rise of androgynous looks and trans or non-binary models like Rain Dove, Hari Nef, and Andreja Pejic who are becoming the faces of brands and runways means queer visibility has been on a huge upswing as of late.

There are niche brands here and there, like Bindle & Keep and CharlieBoy, that offer gender non-conforming clothing to all people. Unfortunately, these labels are few and far between, often pricier and less accessible than your local fast fashion destination. Acknowledging all gender identities in mass retail would greatly lessen the difficulty of shopping for masculine people with feminine bodies, feminine people with masculine bodies, and everyone else in between.

Gender non-conforming clothing becoming more accessible to the people who need them and the creation of clothing that all people can imagine themselves feeling comfortable in would provide great encouragement in pursuing and cultivating a more body pos attitude for queers.