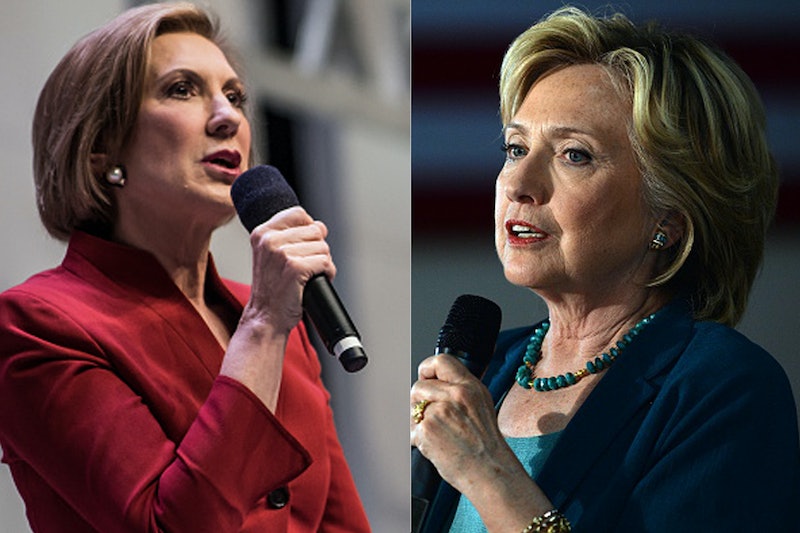 They might be the only two women running for president, but it'd be poor form to compare Hillary Clinton and Carly Fiorina just because of that. If I'm going to put them side by side, it's because both of the women are current frontrunners in their parties. Clinton is leading the Democratic primaries as she consistently polls in first place ahead of Bernie Sanders, while Fiorina fluctuates between third and fourth place behind Republican candidates Donald Trump, Ben Carson, and occasionally Jeb Bush or another candidate. But Clinton has been losing support over the past few weeks, and Fiorina has soared in popularity ever since the second Republican debate. This election could possibly see the two candidates even out in numbers.

Although they might be alike in that they're doing well among polled voters at the moment, Fiorina and Clinton couldn't be more different policy-wise. Each candidate stands fairly strongly with the common positions often ascribed to their respective parties, with Clinton clearly on the liberal side and Fiorina definitively conservative. According to InsideGov, a government research website that compiles information on national- and state-level politics, Clinton and Fiorina disagree on abortion, gay marriage, gun control, Obamacare, taxes, immigration, free trade, EPA regulations, the military, and more. Which side each one stands on is pretty obvious.

They do hold some similar views when it comes to what they might do as president, as Inside Gov details. Both Clinton and Fiorina agree that it should be legally required to hire women and minorities (though Fiorina has spoken out against equal pay legislation). The candidates agree voter registration should be easier. They don't think we should avoid foreign entanglements — it's worth noting that the policy area in which they most align appears to be regarding defense and international issues, as Clinton is much more moderate in that respect than other Democrats.

Outside of policy opinions, there's one huge difference between the two candidates. Clinton has a host of political experience, having acted as Secretary of State from 2009 to 2013 and as senator of New York for eight years before that. Fiorina, however, has never held public office, despite an attempt to unseat Barbara Boxer in 2010. She has plenty of business experience, though, with former CEO of Hewlett-Packard as just one of her titles. And it's actually her lack of political background that's given Fiorina a leg up in the campaign season — current trends show voters leaning toward "anti-establishment candidates" (i.e. someone outside of the political system).

But it's not all policy and professions. Clinton and Fiorina vary in some other totally important ways, too. Like, for instance, Clinton gets burrito bowls at Chipotle, while Fiorina makes pit stops at Dairy Queen (both solid choices, I'll add). Although Clinton has a selfie with Kim Kardashian and Kanye West, Fiorina was taking selfies with Gwen Stefani in 2005, way before it was cool. Clinton's photo with Kimye was strong evidence of another big differing point: Clinton is killing it on social media, while Fiorina doesn't even have Instagram (though she's been killing it in the debates, something Clinton hasn't had a chance to do yet).

When it really comes down to it, though, despite their opposite politics and choices in what to eat when they're on the road, Clinton and Fiorina have shared some distinctly important experiences. They've both experienced the sexism of Trump: Fiorina when he made a reference to her face not being the face of a president, and Clinton when he retweeted a supporter who talked about her "satisfying her husband." Both have taken on the other candidates with ease, whether in debates or interviews or on social media. Clinton and Fiorina have shown they're both forces to be reckoned with, and that shows in their strong defenses of their policy positions as well as their excellent poll numbers.

Either one has a chance of becoming the first female president of the United States. But more than that, they both have the opportunity to be the president. To step beyond the label, as Fiorina spoke about in 2002, of being a "female leader" and just being a leader. Clinton and Fiorina aren't just the female candidates from opposite parties. They're two different, yet similar, experienced, intelligent, and respected humans who want to implement their ideas for the nation. And they're fighting tooth and nail to be the person who lands the top spot.