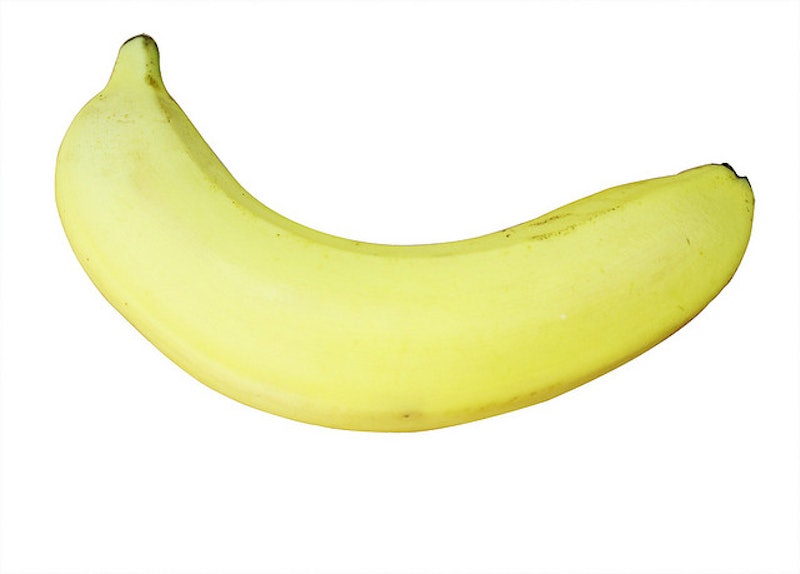 As a culture, we've done a lot of great work busting up sex myths over the past few decades. Most of us no longer believe that a woman who can't have a vaginal orgasm is defective. Sex toys have gone so mainstream that you can buy a vibrator at the drug store, right next to the tampons and allergy meds. And thanks to 50 Shades of Grey, everyone and their mother (literally) knows the basics of S&M. And yet, in this era of relative sexual enlightenment, there's some surprisingly basic stuff that we still find taboo — such as sex with small penises.

For whatever reason, ragging on a small penis as a de facto sexual failure remains kosher to lots of people. Folks who seem sexually open on many other fronts will giggle about "shrinkage," diagnose any man with a fancy car or an inflated ego as carrying around a baby carrot in his trousers, and still point to large penises as being across-the-board desirable — a status object imbued with the same prestige as owning a Rolex or eating a tortilla chip that has been touched by Beyonce.

But most importantly, small penises don't guarantee a bad time in bed any more than big penises guarantee a good time. In fact, sex with a smaller penis can be some of the most satisfying sex around. So don't buy into Big Penis's propaganda! Penises of all sizes can be awesome. Read on for four reasons to give smaller penises a chance. But really, these reasons are just the tip (hee hee hee) of the iceberg.

1. Small Penises Can Be Great For Sexual Beginners

But his small penis turned out to be a great match for my virginal vag, which was so tense that I could barely get a tampon in there. I was eager to have penetrative sex, yet totally terrified by all the stories of searing pain and bloodied bed sheets that I had heard from my friends.

My boyfriend's penis didn't rip me open, make me walk funny, or cause me to experience any of the other colorful sexual ailments discussed around the girls' locker room. I had my first experience of intercourse with a minimum amount of pain, and it had a great impact on me. It made me unafraid of sex and eager to explore. I was able to enjoy my sexuality fully, never worrying that the wrong position or angle was going to put me and my vagina out of commission for a few days (as a few bigger penises did later in my life).

2. Guys With Small Penises Are Often Better In Bed

It's a myth that satisfaction in heterosexual intercourse is mostly about penis size. Only about 20 percent of women can orgasm from vaginal penetration alone — the only situation in which penis size might play a role in the quality of the sex. (And even if you are able to have the elusive vaginal orgasm, there's no rule that says that orgasm has to come from a penis.)

Even if you're very into penis-in-vagina penetration, there's no reason a guy with a small penis can't be awesome at it — there are plenty of sex positions for smaller penises out there that increase sensation and friction. And working together to make sex great can be way more pleasurable than being with a guy who just expects his girth to do all the hard work.

3. Small Penises Can Be Good For Small Vaginas

Much like penises, vaginas come in all sizes. And some of us have less capacious vaginas than others — particularly if we have smaller frames. Smaller-vag'd ladies often get shamed in a manner not dissimilar to smaller-dicked men. When we note that we just can't have pleasurable sex with dicks of a certain size, we are asked vagina-blaming questions about whether we were "sufficiently lubricated," or told that we must have a disorder like vaginismus. But the truth is that for women like me, small penises can be a great option for pleasurable, pain-free sex.

Though I've had both very pleasant and very boring sex with penises of all sizes, I've always found smaller penises easier to work with. They can be inserted into a smaller vagina a bit more casually, whereas getting larger penises in there always feels to me like trying to parallel park a van.

And if you have a small or shallow vagina, you can also pleasurably engage in a wider variety of positions with a small penis. While I've been able to try all sorts of positions with small penises, I've often found that with a large penis, anything outside of the standard "missionary / doggy style / woman on top" trilogy just makes me feel like I am being punched in the cervix. And I'm not alone — despite the good press that monster schlongs seem to get across the board, many women find having sex with a big penis to be difficult and not inherently rewarding.

4. Obsessing Over Penis Size Limits Everyone

Obviously, you know yourself and what gives you pleasure better than I do. But I think a lot of us get seduced by the status issues related to penis size — i.e. that being with a guy with a huge dick is cool, or that being with a guy with a small dick is shameful. I know I did — despite my own positive experiences with my first boyfriend, I was game to gossip about small penises for years, until I realized that what I was giggling about with my friends and what I had experienced in my actual life were totally out of step. I realized that I was mocking small penises in order to bond with other women and not seem like I was challenging them.

If you're anything like Past Me, it might be helpful to ask yourself what any revulsion you feel towards small penises is actually about. Do you actually think they inherently make for terrible sex? Or do you feel pressure to toe the party line and embrace big boners? Are you just afraid of disagreeing with your friends? Are you actually freaked out by the confidence issues that some men with small penises have?

If you think small penises are awful, it's worth examining why. Because I can tell you from personal experience: If you rely on society to tell you how to have sex, rather than figuring out what you personally like, then you're going to miss out on a lot of orgasms (among other things).

More like this
13 Ideas To Add To Your Sex Bucket List
By Kristin Magaldi
35 Sexy Texts To Send Your Partner
By Griffin Wynne and Carolyn Steber
What Are Swingers? Everything You Need To Know
By Lexi Inks
How Getting An Abortion Has Changed From The ’60s Through Today
By Amanda Chatel
Get Even More From Bustle — Sign Up For The Newsletter